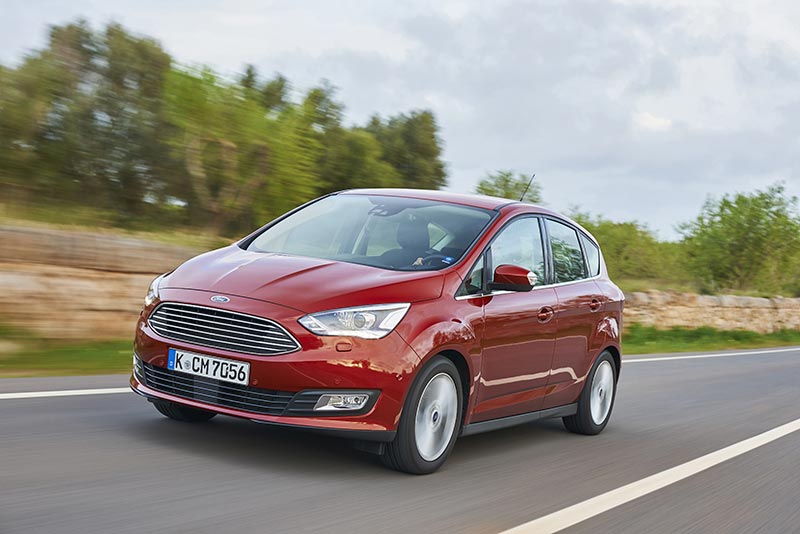 Historically, Ford aren’t ones for delving too far into niche markets. The ‘a different model to suit every lifestyle‘ theory that certain manufacturers have bought into has been generally sidestepped in favour of a more traditional, streamlined range.

Their ‘MAX’ badged models are a well established part of the Ford family, though; the C-MAX and seven-seat Grand C-MAX having been around since 2003 and 2010 respectively with the smaller model finding itself over 200K homes in the UK alone, making it Ford’s third most popular model after the Fiesta and Focus.

The time has come for both flavours of C-MAX to have a refresh, and we’ve had a drive of both of them to see how they stack up against the outgoing models.

The five-seat C-MAX: Ford have subtly made this a model in its own right, rather than a Focus + 20% and this new model is even more individual. Where cars such as the Golf SV (Golf Plus) have always been a visually compromised version of the original, the C-MAX, with its raised shoulder-line, wraparound LED lights and sleek glass-housing looks far more purposeful; less awkward. 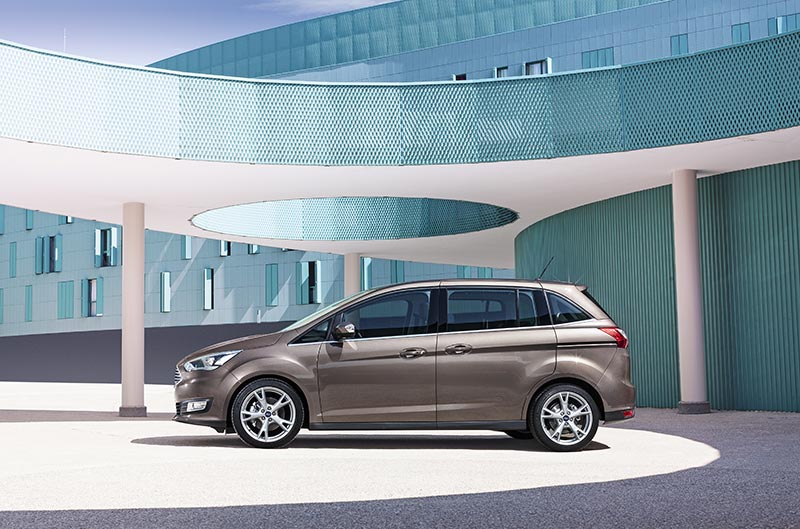 The Grand C-MAX also does a fairly good job of disguising its inherent MPV-ness, especially when you consider it can carry seven people. Runners for sliding doors never add anything to a car’s aesthetics qualities, though, and the Grand loses out to its little sister in the looks department.

Both C-MAX come with Ford’s newly designed dashboard and it’s visually a tweaked version of the outgoing design. Some controls such as the air-vents’ knurled dials and CD slot are frustratingly hard to reach, though, forcing the driver to shuffle or lean forwards in their seat. 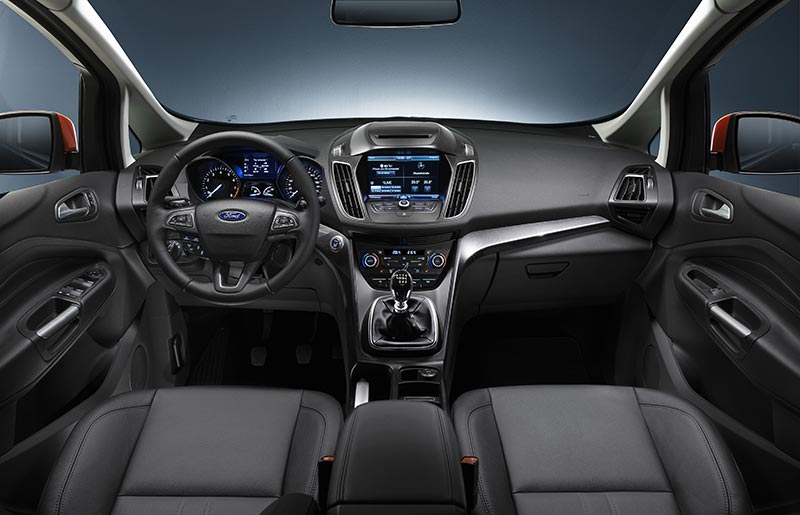 Titanium spec cars upwards come with Ford’s excellent SYNC 2 infotainment system. It’s high-res display and common-sense approach to nav, music, air-con etc put more premium marques’ systems to shame; the nav’s accurate diagrams of upcoming junctions make so much more sense than generic images and add confidence on unfamiliar roads. Some of the touchscreen controls are a bit small, though and they require an incredibly steady hand which isn’t always available in a moving car.

On the road, both new C-MAX stay true to Ford‘s ethos of providing exciting handling and a smooth ride. The smaller C-MAX feels thankfully similar to the Focus in terms of road manners and its loftier centre of gravity only shows itself if the car’s really pushed. Things come a bit more undone in the Grand C-MAX, though, and there’s less fun to be had than in the five-seat variant, but when compared to other manufacturers’ seven seat offerings, the Grand C-MAX is up there with the best in terms of driver satisfaction. 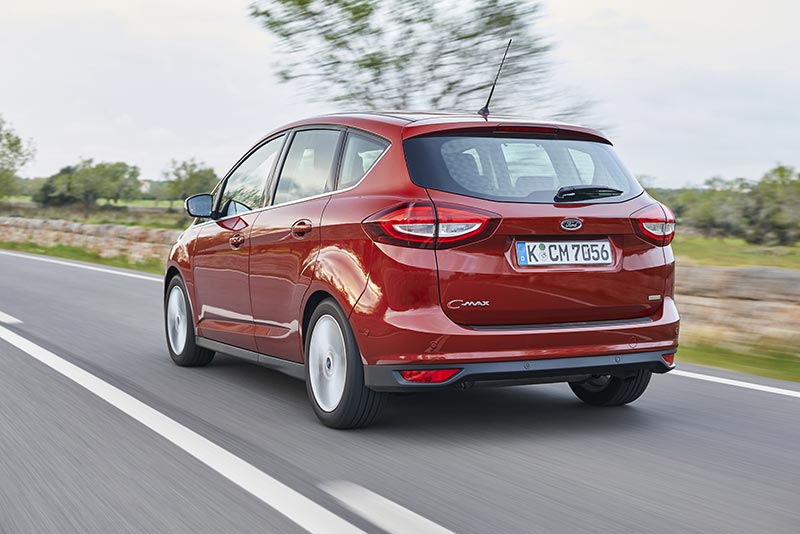 Clever seats in the Grand C-MAX

The Grand C-MAX is packed full of clever ideas which all go towards making carrying passengers that little bit less stressful. Not least of these is the rear five seats which slide and fold in all manner of configurations, even making a little walkway to the rearmost seats so that other passengers aren’t forced to get out in the rain whilst their seat is folded forward to allow entry. Seven seats in a relatively small space does have its consequences, though, and in the case of the Grand C-MAX, there’s practically no boot left when the rearmost seats are in use. 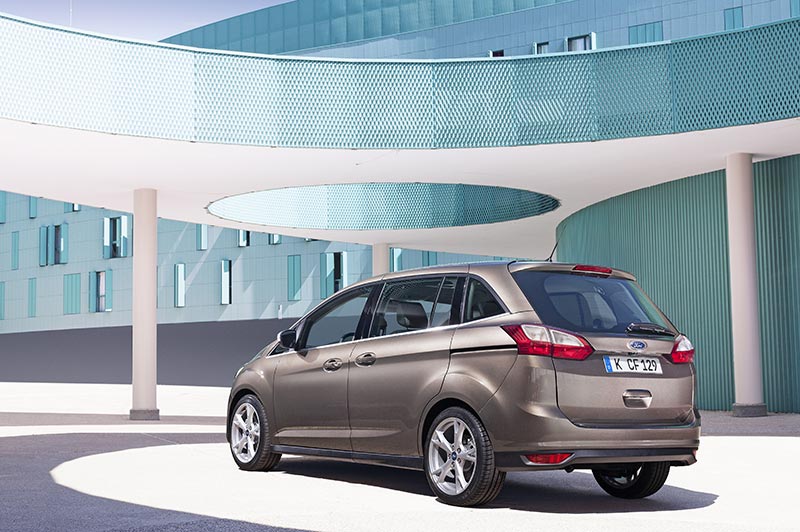 Both the C-MAX and Grand C-MAX will be available with a choice of petrol or diesel engines when they go on sale later this year, but Ford expect the 1.5l TDCi unit to take the lion’s share of sales (71%), with their evergreen 1.0l Ecoboost petrol unit taking 14%.

For full details, go to; http://www.ford.co.uk/Cars/New-C-MAX

I'm Ben Harrington and I'm a car lover, freelance motoring journalist and family-man (I'll let you decide the order!) I started Driving Torque in 2010 to share my love of all things motoring with the wider world. Since then, … END_OF_DOCUMENT_TOKEN_TO_BE_REPLACED