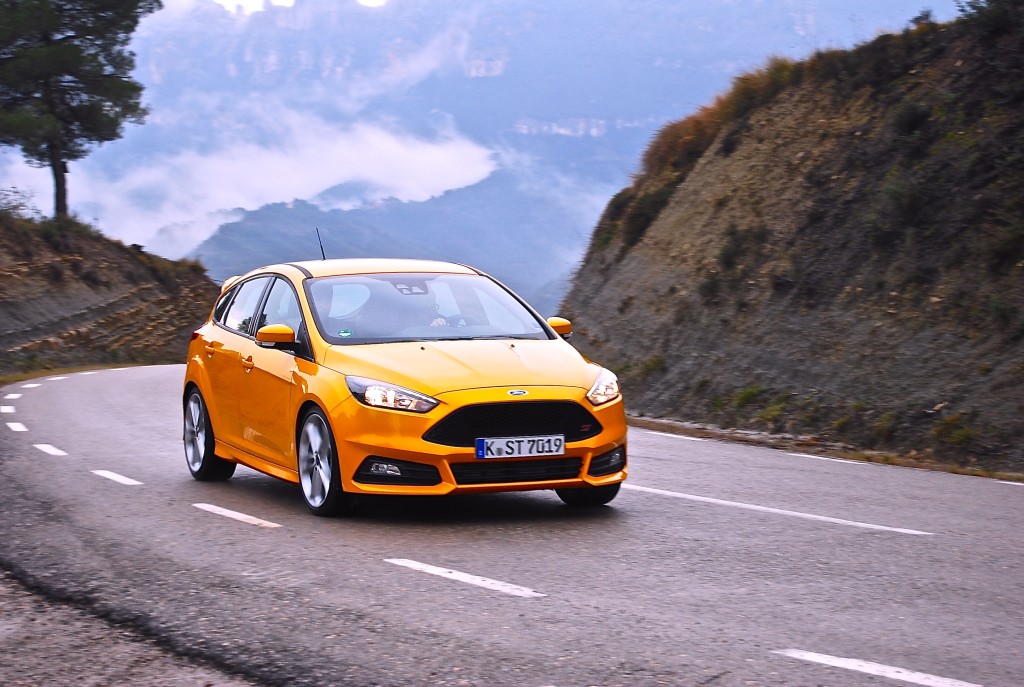 Ford’s ‘Global Performance Vehicle’ division seem to have gone into absolute overdrive recently. Just as the price of oil quite handily drops through the floor, hardly a week goes by when Uncle Henry isn’t taking the wraps off a GT, an RS, or in this case, two Ford Focus STs.

The ‘normal’ Focus ST picks up where the 2012 model left off, but for the first time ever, there’s also a Diesel Focus ST, and both of them are available in hatch or wagon flavour and the usual range of suitably eye-catching colours, including the somewhat divisive ‘Tangerine Scream’.

The diesel unit has apparently been introduced following the success VW have been enjoying with their Golf GTD and Ford are expecting a clean 50/50 split between the two power-plant’s sales figures. It’s visually a carbon copy of the 2.0l EcoBoost petrol models, so you lose nothing in that department. Thankfully the petrol and diesel even wear the same badge; it can’t have taken Ford long to realise that the ‘Focus STD’ legend just wouldn’t have worked………. 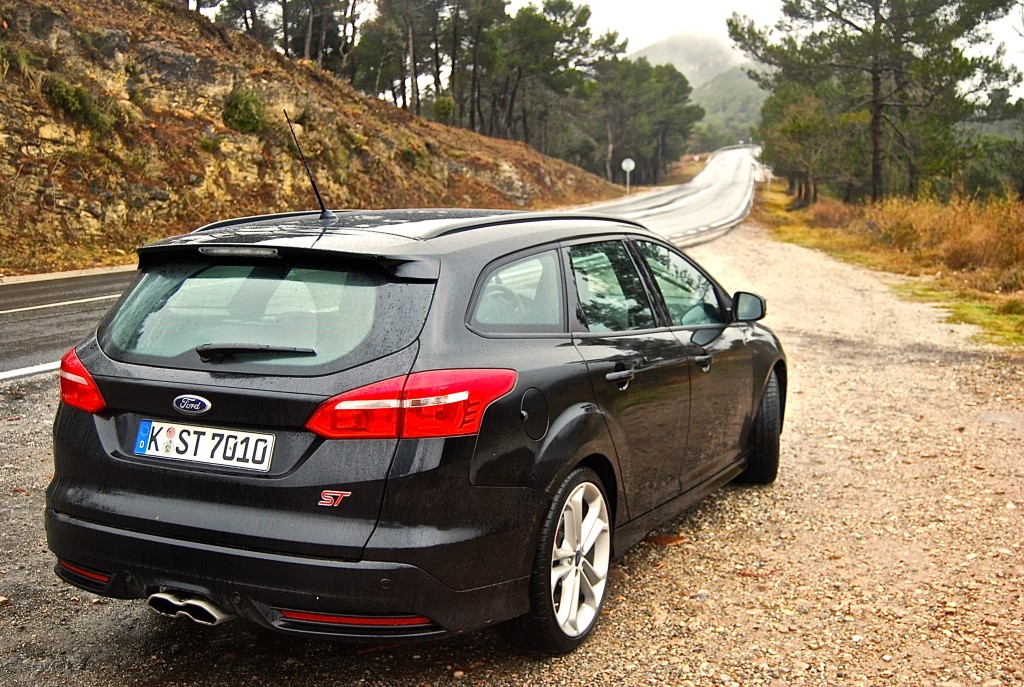 First-things-first, though – the ‘traditional’ petrol derivative: Its 247bhp is still channeled through the front wheels without the aid of their ‘RevoKnuckle’ technology, instead relying on a revised Torque Vectoring system to keep things straight and true. This seems to do its job well, and the ‘left-right, left-right’ sensation that the previous Ford Focus ST suffered from under rapid acceleration has been all-but eliminated. It’ll get itself to 62mph in 6.5 seconds, but only on a dry, sticky surface; show a lack of subtlety with the loud pedal on a wet road and the petrol ST will happily spin its wheels in third gear.

Thanks to the addition of Auto-Start-Stop across the range, the petrol Ford Focus ST’s efficiency has been improved by 6 per cent, getting a fairly impressive 41.5 miles out of a combined gallon of petrol, and only releasing 159 grams of CO2 per km. If it’s economy that floats your boat, though, the new-kid-on-the-block will probably be more your thing………

The diesel Focus ST’s performance figures aren’t that impressive on paper – 181bhp and 0-62mph in 8.1 seconds won’t get it into the Fast-Ford hall of fame, but that’s not the whole story. It only produces a fleet-friendly 110g/km Co2, and where the petrol engined car produces 360Nm of torque, the diesel trumps it with 400Nm, all of which is conveniently available from just 2000rpm. What this translates to in the real world is a six-gear car that could actually live with just two of them; first for pulling away from standstill and 3rd for the rest of the time.

Both cars channel noise into the cabin via a sound symposer, giving the driver a ‘proper’ hot-hatch experience. Don’t worry about the diesel sounding like a ball-bearing in an aerosol, though; there is the inevitable clatter at standstill but it develops into pretty-much exactly the same pleasant thrum as the petrol once you’re on the move. 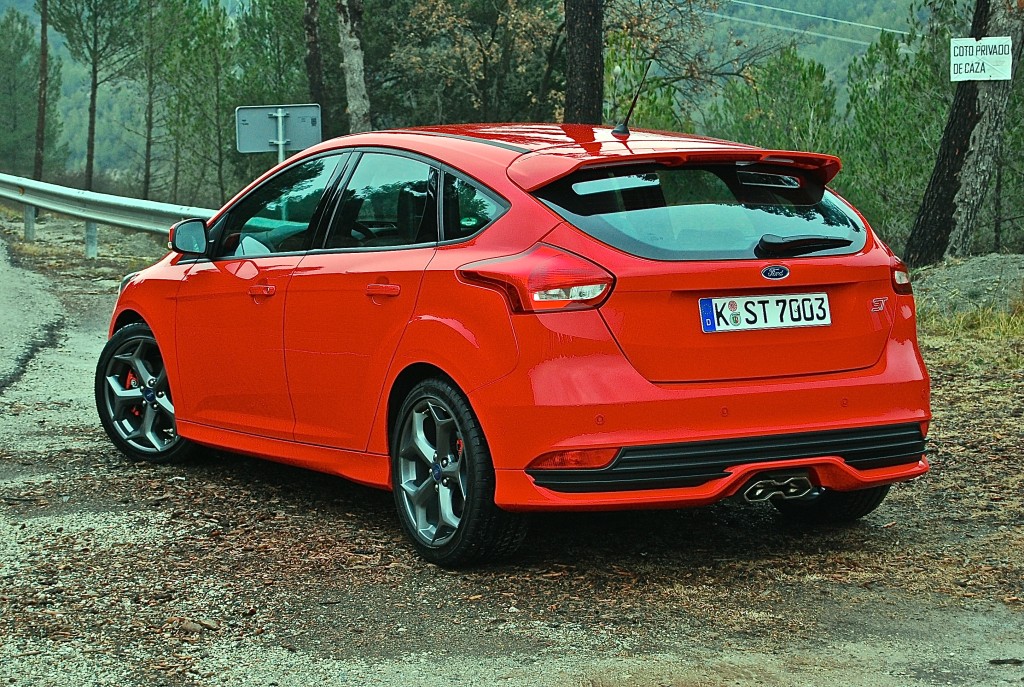 There isn’t much to split the two Focus ST’s handling characteristics either; the ribbon-smooth roads on our test-route around Barcelona can’t possibly give an accurate indication of how the car will fare on our pock-marked tarmac, but the petrol was as responsive and accurate as you’d expect, and there was none of the usual nose-heaviness one associates with diesel cars. A nice little surprise came when we discovered that both models are happy to stick the rear end out, especially the wagon.

Ford are keen to use analogy that the new Focus ST is a pentathlete; it may not be the best in the world in any particular discipline, but it does everything well. With the Focus RS looming heavy on the horizon, they had no choice but to show some considerable restraint with the petrol ST, but the diesel ST is a different matter; rather than water down the ST brand, it’s an admirable player in the performance diesel market and, on first impressions at least, is more than fit to wear the badge.

I'm Ben Harrington and I'm a car lover, freelance motoring journalist and family-man (I'll let you decide the order!) I started Driving Torque in 2010 to share my love of all things motoring with the wider world. Since then, … END_OF_DOCUMENT_TOKEN_TO_BE_REPLACED