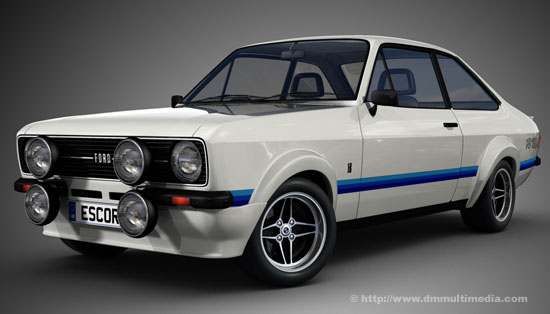 Ford Focus vs Ford Fiesta – the battle of the STs

Since the dawn of time, well, since 1963 anyway, our quirky little island has been caught up in an unrelenting love affair. Yes, we’re quite keen on GTis, SRis, GTEs and various other alphabet-soup inspired monikers, but what we ceaselessly lust after is a certain breed of breathed upon family hatches and rep-mobiles, namely Fast Fords.

To suggest that every nutty Blue Oval has been fantastic would be somewhat ill-informed, there have been a few dogs. But through good times and bad, booms and busts, Ford have bravely persevered in their quest to bring affordable fun to the blue-collared masses.

So, in these times of double-dip recessions and soaring fuel costs, what do Ford have on offer to tempt out the cheque-books and exactly where does a Fast Ford fit into our precariously balanced lives? 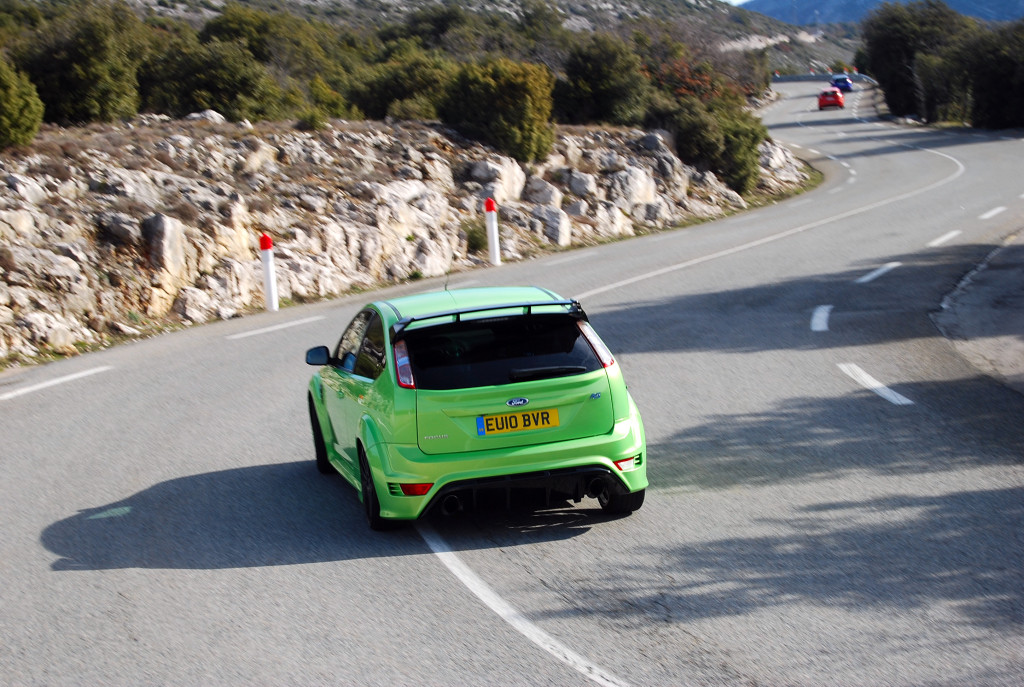 Have we seen the back of RS Fords? Don’t you believe it!

Well, the RS badged cars are currently conspicuous in their absence (only temporarily, apparently), so have Ford turned their back on their responsibilities? Are we destined to seek our thrills elsewhere?

They may not be RSs but, like steroidally enhanced buses, out of the mire appear two excitable, ST (Sports Technologies) badged hatchbacks to answer our question. Both are hellbent on not only getting you from A-B, ASAP, but also bringing the family along and thus extending the Fast Ford bloodline that can be traced back over 50 years.

Previous ST badged Fords have suffered something of an identity crisis. Most have danced around their almighty RS siblings, being careful not to tread on their toes and ending up waltzing in no-mans-land, stuck in limbo somewhere between ‘come and ‘ave a go if you think your ‘ard enough’ and ‘I’m awfully sorry if you hurt your knuckles on my face’. These two STs are different though, they’re currently at the top of the Ford tree and are unashamedly set in the nation’s psyche as THE Fords to have if you want to make a statement.

The question is, which one is ready to face the upcoming fight against the auld enemies – Peugeot (208 GTi), VW (Golf GTi) and Renault (RenaultSport Clio)? Driving Torque has driven the Focus ST and the all-new Fiesta ST to discover whether either are true heirs to the throne. 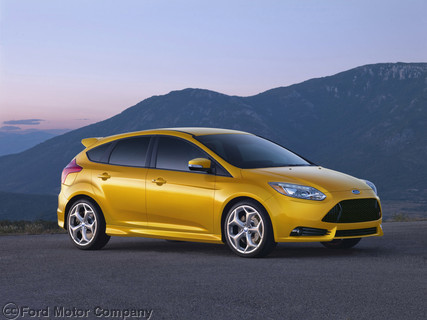 The Focus ST has been around for some time now. It first saw the light of day in 2006, sporting the adaptable 2.5 litre Volvo-sourced lump as seen in the loony Focus RS. It performed well enough and was updated visually to provide adequate impact, but horrendous fuel and tax costs just weren’t going to cut it in today’s society. Step forward the EcoBoost. Without sounding overly dramatic, this range of direct injection, turbo-charged engines could be hailed as the future. Not only for Ford, but for petrol engines in general.

The 2.0 litre engine found in the Focus may lose half a litre of displacement on the previous model but, through various use of witchcraft, its output rises from 222bhp to 250bhp whilst, at the same time, pushing claimed economy figures up a third from 30.9mpg combined to nearly 40mpg! Perhaps more importantly, it’s quicker too, not only in a straight dash but it’ll tackle the twisty bits with added assurance, having lost some unsightly weight up front. 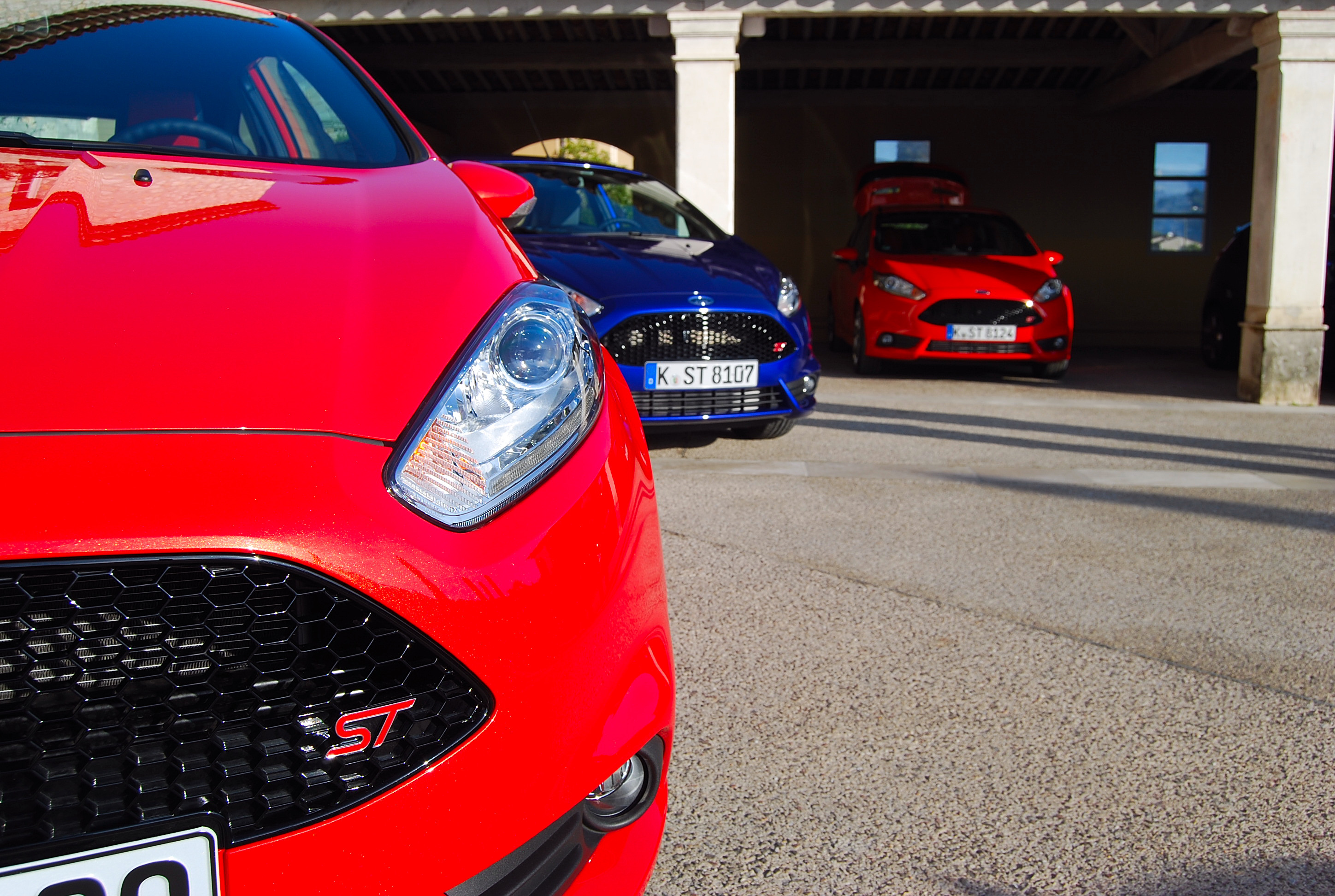 It’s more difficult to draw a direct comparison between the Fiesta ST and its predecessor as the last incarnation was deleted in 2008. It hardly made a dramatic impact on the world and could undoubtedly be placed in the ‘must try harder’ bracket. This 2013 model has far loftier aspirations and, again, it’s relying on the EcoBoost engine to thrust it into the spotlight. What the 1.6 incarnation loses in size, it makes up for in enthusiasm and it uses all of its 182bhp to propel the lighter Fiesta ST to 60mph in 6.7 seconds; only 0.2 seconds slower than the Focus – barely noticeable in the real world. 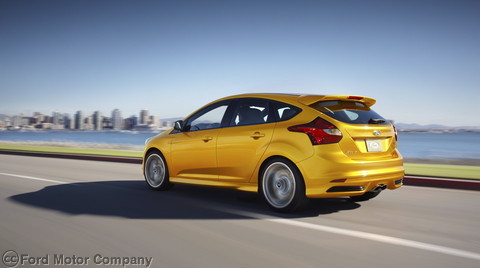 Those exhausts are dual trapezoids – don’t you know!

Both models have ST-only noses grafted on, in order to further enhance the dramatic effects already offered by their ground-hugging body-kits and enlarged wheels. Looks are obviously a matter of personal taste but, whereas the Focus grabs attention at every turn (especially in the Tangerine Scream hue of our test car), it may take more of an automotive aficionado to pick the Fiesta out from its lesser-specced brethren. Head-turning may not be your thing, of course, but Fast Fords aren’t usually aimed at the shy, retiring types and if I’d just bought the Fiesta, I’d forever be wishing that it could dominate a scene like the Focus, with its fancy exhaust tips (dual trapezoids, in case you were wondering). 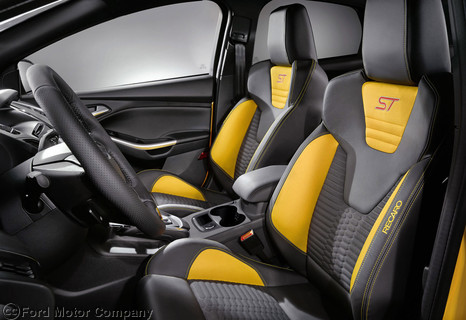 Focus ST Recaros – possibly the grippiest seats ever found in a production car.

The modus operandi of these cars is to combine the practicalities of a hatchback whilst making the driver feel like Sebastien Loeb when the mood takes them. On the practical front, the Focus is head and shoulders above the Fiesta, not only due to its size advantage in every direction but also due to the fact that it’s only available in 5 door guise. The Focus and the Fiesta are both ‘global cars’ according to Ford and yet, the Fiesta ST will be offered in the US with 5 doors, two more than in the rest of the world. Ford must be saving a fortune by not making a 3dr variant of the Focus but I can’t help but wonder if their reluctance to sell a 5 door Fiesta ST in Europe is through a fear of sales being pilfered from the more expensive Focus.

Back to the important bits though – the way these cars drive. Turbo-lag is all but eliminated on both cars and the torque curve is steady and predictable – it really is hard to find fault in either power plant. In the past, Ford have utilised a clever bit of engineering called a Revoknuckle, in order to convince the front wheels that they really can multitask, handling the, not insignificant job of steering the car whilst at the same time, lassoing 250+ horses as they try to escape in unison, usually by torque-steering through a hedge into the nearest paddock. This Focus ST however is Revoknuckleless (?!?) and it leaves the job of keeping Red Rum et al on the grey stuff up to some very clever electrical aids instead. The result is admirable but by no means perfect – floor the Focus ST and there is a slight feeling of hanging on, as the arguments between physics and microchip are echoed through the steering wheel. Each front wheel temporarily breaks free before it’s reined in, leaving it’s opposite number to head for the horizon. I can imagine a child would enjoy a similar sensation if he were to sit atop Usain Bolt‘s shoulders – whilst he competed in the Olympic 100m final. 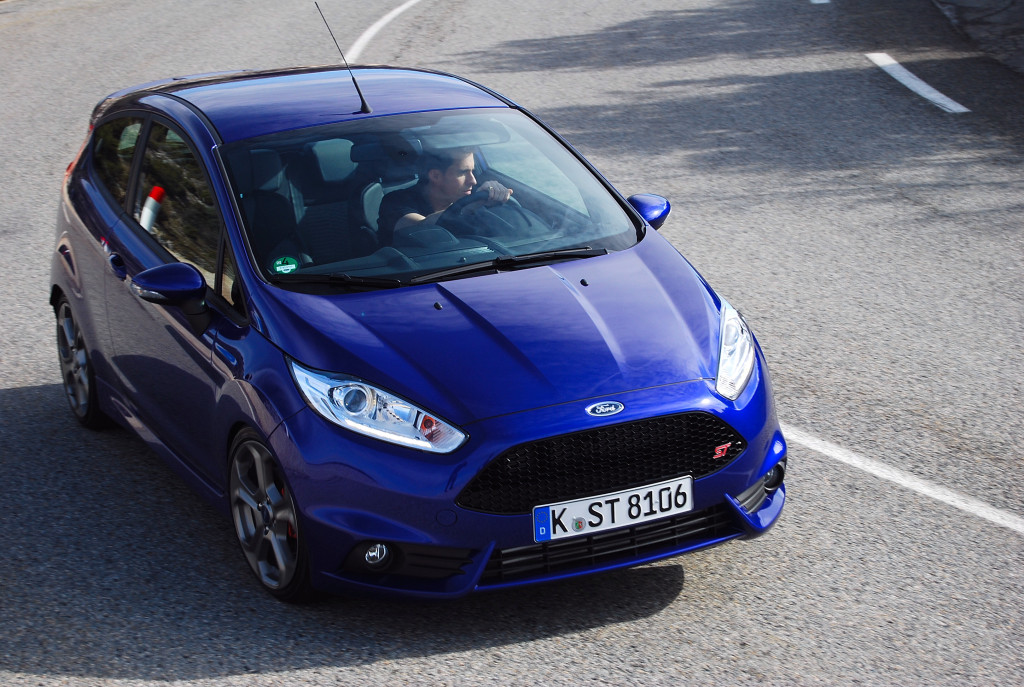 The Fiesta ST, on the other hand, suffers none of these problems. Less is, once again more in this case and the smaller, less powerful car can simply get on with the task in hand without worrying about being overburdened with power. The task, of course, being to provide maximum thrills to all occupants, and this is certainly what the Fiesta ST does. We were lucky enough to take the car to its max on the sublime roads above Nice and whatever was thrown at it was simply returned with interest. Ford have done an incredible job here; they’ve disguised all the electrical aids and excess flab that modern cars are cursed with and made a car that feels raw and unbridled. Acceleration is keen with the engine happy to rev, and the car simply handles whatever corners are thrown at it, without ever getting flustered or confused.

It’s a similar story in the noise department – an aspect I unashamedly place much importance on. Both the Focus and the Fiesta utilise a clever system called a Sound Symposer which, in simplest terms pipes the engine note directly into the cabin without being deafening at the exhaust and failing to meet stringent sound regulations. I found the whole thing a little frustrating in the Focus, sort of like hearing your favourite song on a radio that’s stuck on mute. The Fiesta’s system is turned up to 11 in comparison and provides a hugely satisfying soundtrack that gets better and better as you progress towards the red-line.

The Fiesta ST doing it’s best impression of a Reliant Robin. This chassis is properly sorted.

So, which one would I take home? Obviously, if size and 5 doors are high up your list of importance, it’s a no-brainer, it’d have to be the Focus as the Fiesta just can’t compete. If it’s pure driver satisfaction that floats your boat though, I’d undoubtedly save a wad of cash and take the Fiesta – it’s just more satisfying. I’m not saying that it’s perfect – the furthest gears were a little hard to reach and the smaller Recaros pinched a tad after a couple of hours but, on first impression, these were honestly my only niggles. I’ll be fascinated to find how the Fiesta ST is to live with when I get my hands on it for a longer test but, for now, I’d go as far as to say that if Toyota’s GT86 represents a return to innocence for coupes, this Fiesta ST is it’s hot-hatch equivalent. Some accolade huh?

For brochures and details on how to order, please go to; http://www.ford.co.uk/Cars/Fiesta/Fiesta-ST

I'm Ben Harrington and I'm a car lover, freelance motoring journalist and family-man (I'll let you decide the order!) I started Driving Torque in 2010 to share my love of all things motoring with the wider world. Since then, … END_OF_DOCUMENT_TOKEN_TO_BE_REPLACED