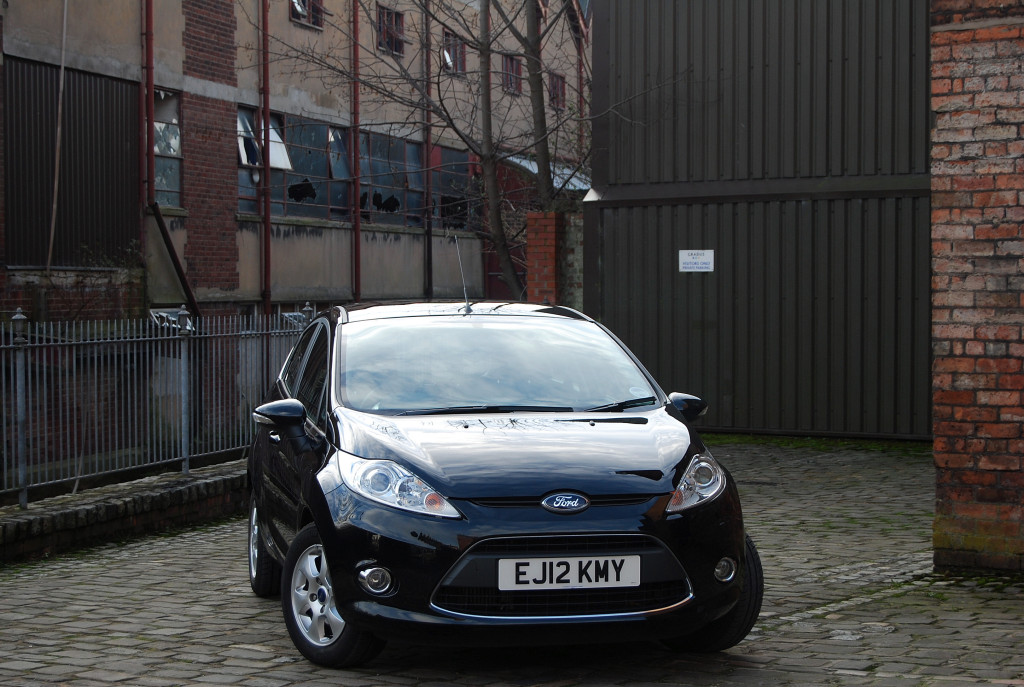 Fact; The Ford Fiesta has been Britain’s most popular car every year since 2009 when it knocked its big brother – the Focus off it’s well-worn mantle.

Near Certainty; Unless the price of oil is decimated and the car buying public decides that a 10yr old Range Rover Vogue, equipped with a 4.4 V8 petrol engine (circa £9975) makes more financial sense than Ford’s latest small hatch (from £9795 OTR), the New Ford Fiesta will march on triumphantly to the top of the 2013 charts.

How can I be so sure that the Fiesta won’t be knocked off its lofty perch? Well, Ford seemed to have taken the old adage ‘if it ain’t broke, don’t fix it’ and used it with consumate wisdom. There are definitely enough revisions and improvements to the 2013 model to justify the ‘All New’ tag, but the majority of the car is taken straight from the previous incarnation which was hardly looking long in the tooth itself.

The All New Ford Fiesta 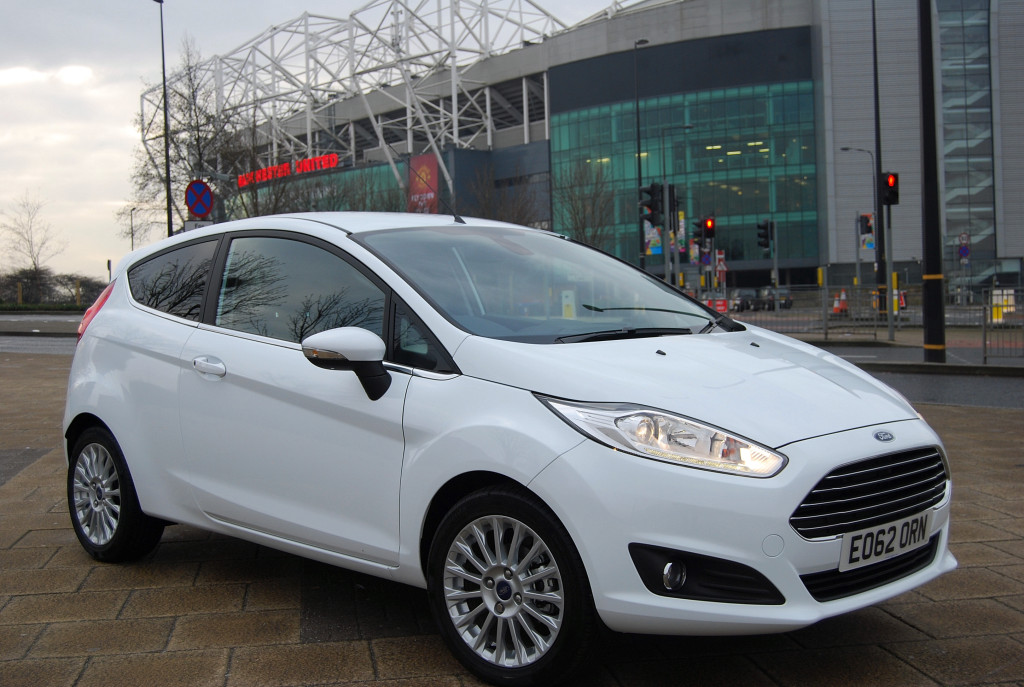 I was in the fortunate position to arrive at the New Fiesta launch in Manchester in the previous model that I was road testing. This ‘out of the old, into the new’ situation is undoubtedly the best way to draw comparison as I had every last niggle and highlight fresh in my mind. In the blink of an eye, I was drawn to establishing whether this new car had simply improved upon the last formula, or whether the essence of such a successful model had been lost in the intricacies of launching a car with its own identity and character.

Visually, the new model pulls off the amazing trick of being very similar to its predecessor whilst, at the same time, looking completely different. That trapezoidal nose has actually graced the front end of many Fords, including the Fiesta, for a while now. By adding some shiny brightwork, giving the new model a facelift and swapping the smaller, secondary air inlet from above to below the main ‘mouth’, the resulting car is instantly transformed, not only into a new model but also into a part of the new Ford family image. 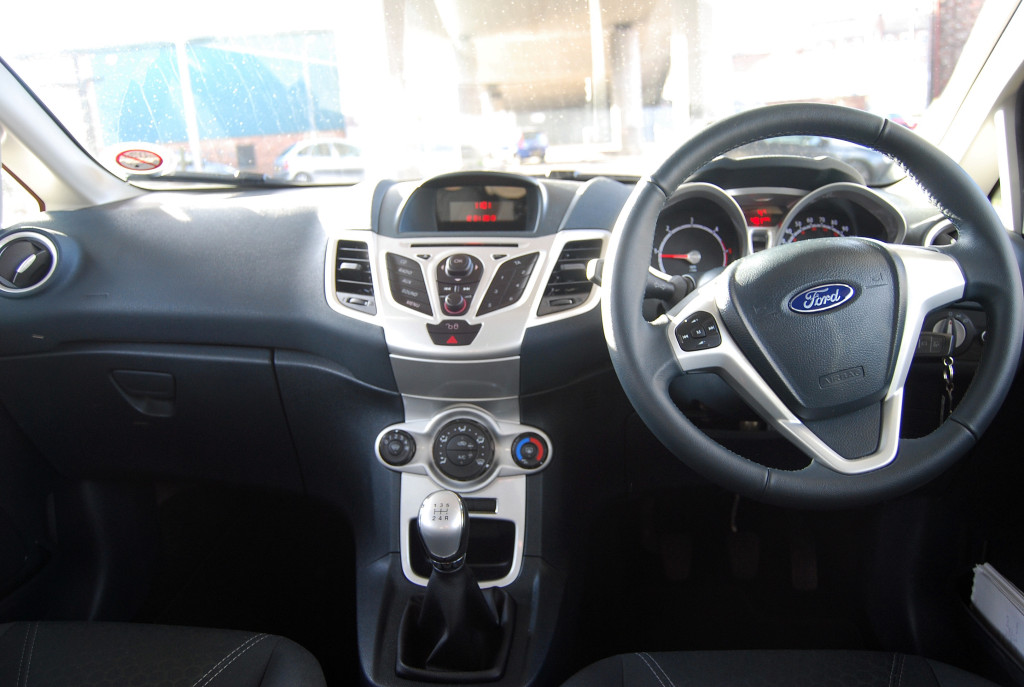 2012 Fiesta Interior, a very pleasant place to be

Inside the New Fiesta, the changes are negligible which came as no surprise as, again, the previous model’s cabin was chic, funky and fresh, with all manner of eye-catching shapes and materials being utilised in a very similar fashion to the ultra cutting-edge Focus. The quality of materials used and overall attention to detail really have no right to appear in a car in this price bracket and Ford have been quite shrewd in ensuring that possibly the most memorable part of the car is the environment which the occupants see most; the cabin. It really is futile giving a car like this the world’s most attractive engine bay when the majority of its target market have no inclination whatsoever to ever open the bonnet. 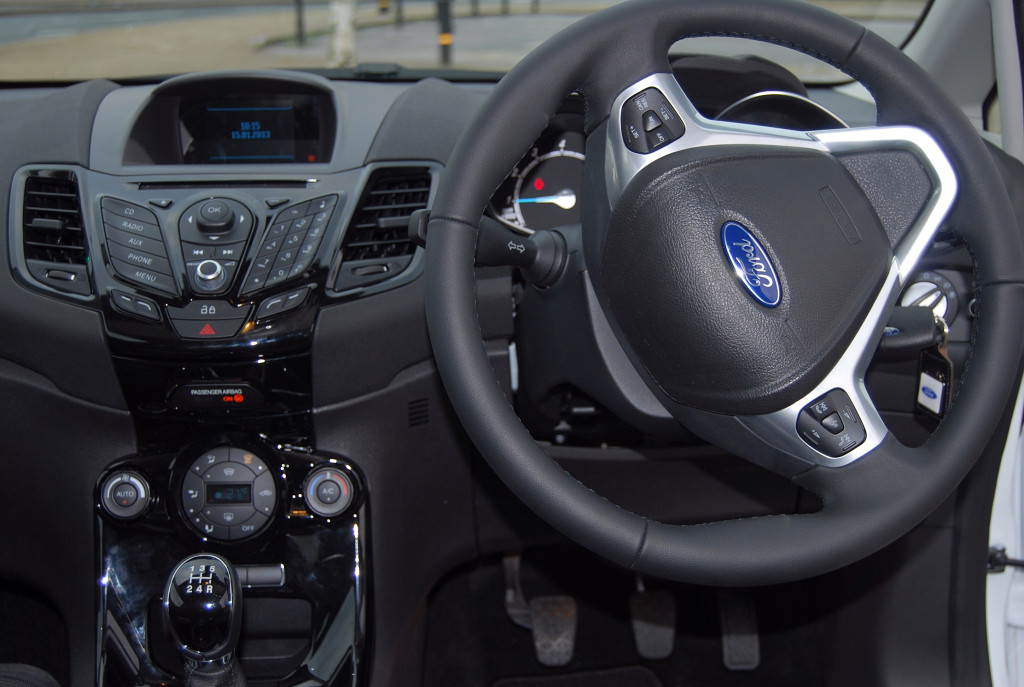 That said, there were a couple of niggles inside the previous model Fiesta that have now been ironed out, the most significant being the multimedia unit. The unit in my test 2012 model wasn’t disastrously bad, it was just nothing to write home about either; it played CDs, it boasted multiple radio stations, it even had an incredibly useful USB port, into which one could plug one’s Iphone and merrily select tracks in MP3 format. The problems arose when the ‘shuffle’ mode was operated and a random selection of tracks were played. It would reach the end of one track and, instead of instantly choosing the next one to play, the first few lines of the subsequent song would be heard whilst it made up it’s mind. Sounds like a minor annoyance, doesn’t it? You try it, in no time at all it’s incredibly irritating.

Thankfully, Ford have decided to outsource the current multimedia software to a little company who apparently know a thing or two in that field; Microsoft. They’ve concocted a system called Sync and, speaking from first hand experience, it does exactly what it says on the tin, eradicating any previous issues that existed.

Another technological innovation on the new Fiesta is a system called MyKey. In a nutshell, it allows the vehicle to be programmed by its owner via the keys, altering settings such as maximum speed, audio volume and the low-fuel warning. The thinking behind this is that parents, worrying about their teenage offspring who are out driving, will be reassured in the knowledge that their pre-armed Fiesta will be working extra-hard to ensure their safe return home. Now, the memories may be getting a little hazy but I can remember enough about being a teenager to state with confidence that this is the last thing I’d have wanted in my car. I also know that, even though it’s generally not their money that’s buying their first car, with enough incessant whining, any teenager worth their salt will be able to influence which car is bought and potentially steer well clear of this ‘big brother’ technology. It’s certainly innovative and will probably attract buyers, my only reservation is that it could possibly deter buyers too. 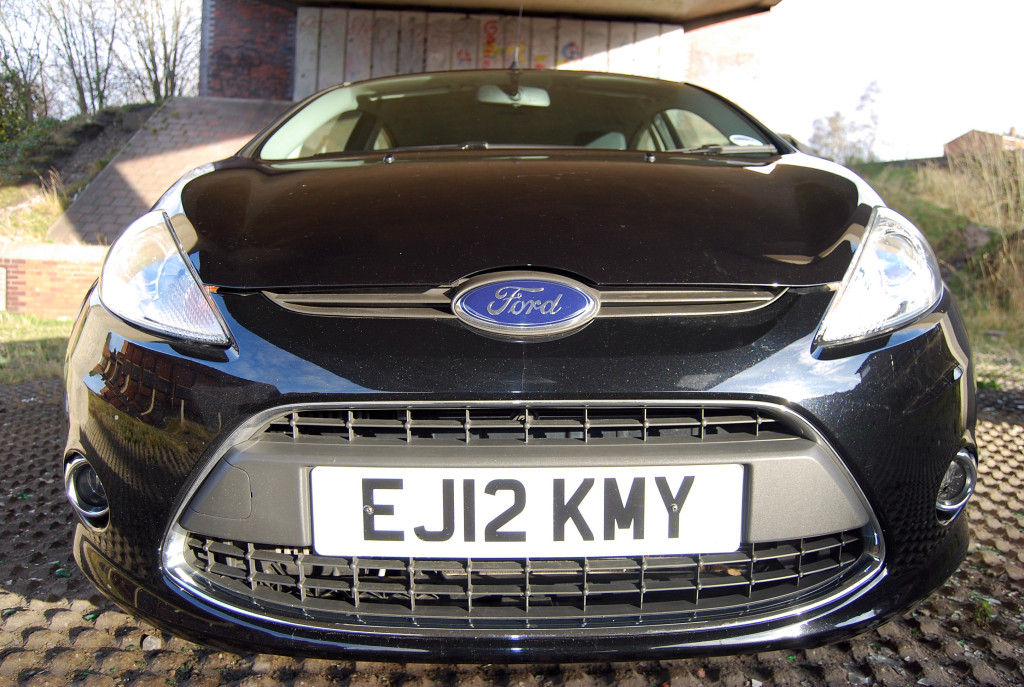 Ford claim that, due to the state of the global economy, many buyers are choosing to ditch their larger hatchbacks and are opting instead for something Fiesta sized to keep costs down. The fact that their very own Focus was deposed from the top of the charts by the Fiesta corroborates this claim and Ford have decided to act upon it by adding a new range-topping Titanium X model, in order to reinforce that feeling of quality that the Focus driver had previously enjoyed. Combine leather and climate control with the fact that the Mk1 Focus was only 20cm longer than this latest Fiesta and it’s easy to see how a smooth transition can be achieved.

One monumental leap forwards in this new model is the introduction of Ford’s multi award-winning range of EcoBoost engines. I’d experienced this excellent little three-cylinder in the Focus recently, without disappointment, and I was itching to get my hands on the lighter Fiesta, equipped with the same powerplant. Does it work? Of course it does! I sampled both the 125ps and 100ps variants and both were huge fun with character to burn. I quite safely predict that this excellent engine/chassis/gearbox combination will only reinforce the Fiesta’s rock-solid reputation in the market as it offers a fun factor that it’s competitors can only dream of. 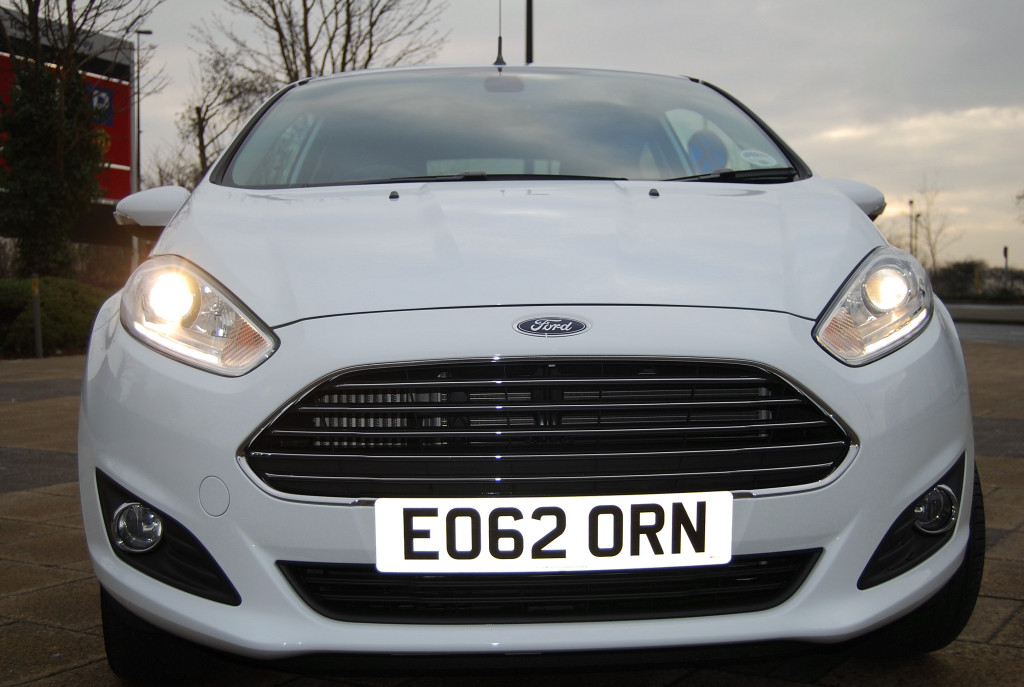 ……and All New Ford Fiesta Nose. Some shape-shifting going on.

The official economy figures for the Ecoboost models are 65.7mpg combined, admittedly this isn’t a patch on my Duratorq Diesel test car’s 85.6mpg but there are other considerations to be taken into account here. The very nature of the free-revving Ecoboost engine when compared to a fairly reluctant Diesel is hugely important in my opinion and the throaty sound that resonates around the petrol-engined model’s cabin gives a real hot-hatch feel without the associated costs. I also found that the relatively small Fiesta struggled with the extra weight of a Diesel lump up front whereas the lightweight petrol engine made the car less nose-heavy into corners and really did justice to the extremely satisfying driving set up. As both models slip in under that magical 100g/km on emissions, there isn’t a VED issue to separate the two either.

Ultimately, the Fiesta’s sales figures speak for themselves and it was going to take a series of huge errors for the updated model to ruin such a complete little car. That said, it wasn’t perfect, a fact that Ford weren’t too arrogant to acknowledge and remedy. With its niggles ironed out, it’s striking new look and, perhaps most importantly, the introduction of their EcoBoost engines, the Fiesta will undoubtedly go from strength to strength. 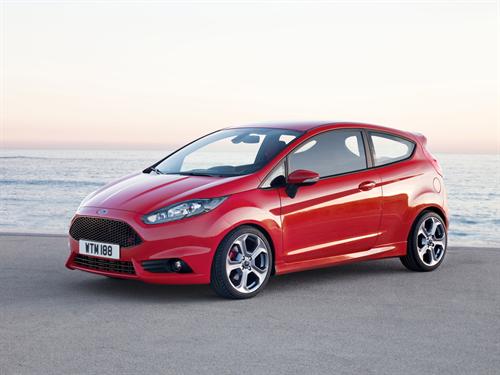 ST due to arrive in April – looks fantastic 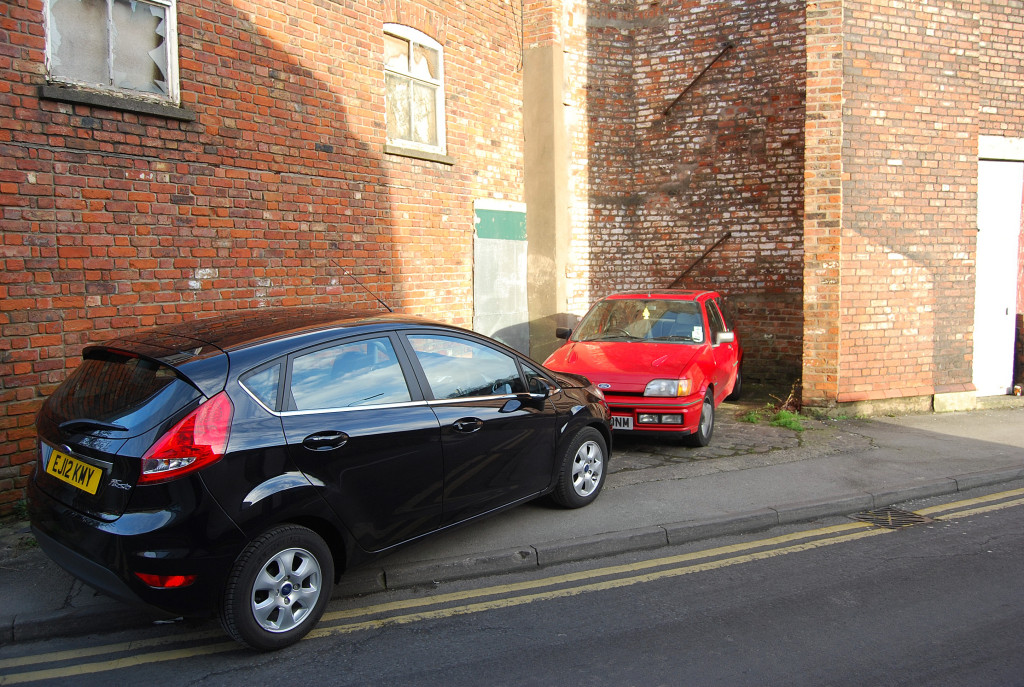 They always recognise their own, apparently!

I'm Ben Harrington and I'm a car lover, freelance motoring journalist and family-man (I'll let you decide the order!) I started Driving Torque in 2010 to share my love of all things motoring with the wider world. Since then, … END_OF_DOCUMENT_TOKEN_TO_BE_REPLACED