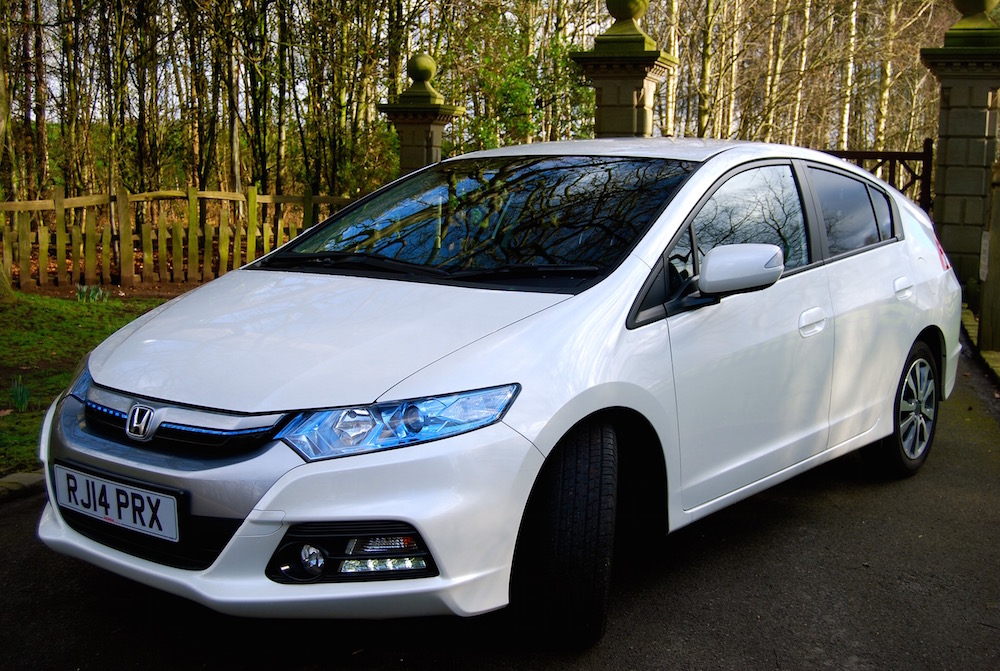 The first Honda Insight – a two-seater, three door coupe, was launched way back in 1999. This was when hybrid cars were revolutionary, not the common sight that they are on our roads today, and the Insight, along with a certain Toyota, were apparently a view of the future of ‘planet-friendly’ automotive styling and engineering.

Fast forward to 2015 and the Insight has grown into a slightly more conventional five door hatchback; its wind tunnel inspired, super-slippery design is still the driving force, but some aerodynamic aids such as the covered rear wheels have been sacrificed in the name of aesthetics. Blue-tinted lights are a snazzy little feature that make the Insight stand out in a crowd 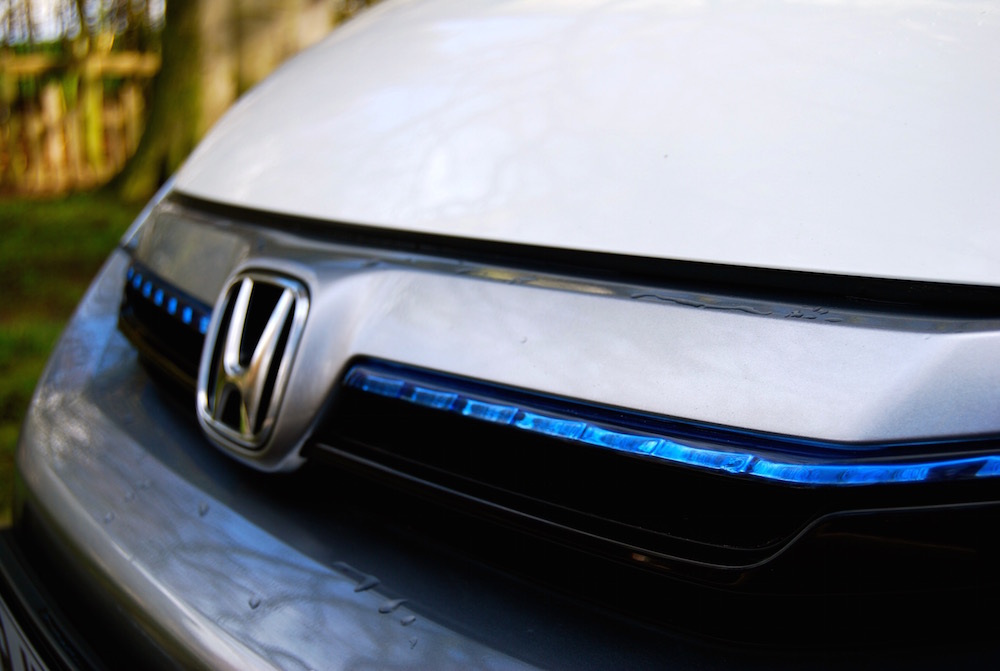 Cutting bothersome weight is still something the Honda engineers obviously prioritise, though, and that becomes apparent when you look inside the Insight. The usual levels of Honda quality and refinement are found lacking somewhat when compared to the rest of the range, with some plastics utilised that are way too scratchy and flimsy for a car that’ll ultimately cost over £20K to own.

Everything inside the Insight feels like it’s ducking down to help provide some streamlining, too, and you almost look down on the dashboard. The driving position is more ‘sit-on’ than ‘sit-in’, and you really start to feel like providing somewhere for a driver and passengers is an inconvenience the Insight would rather do without.

That said, there is a surprising amount of living space, far more than you’d warrant by looking at the Insight’s basic shape and size, but when the engine bay only has to find room for a diminutive 1.3l engine, it does tend to free up some space inside to stretch your legs.

On a less positive note – the other half of the Insight’s power train that backs up the little petrol unit needs somewhere to keep its Nickel metal hydride batteries, so don’t expect the biggest boot in the world. At 408 litres, it’s not that pokey, and the flat floor does make loading larger objects in and out easier, but when you consider that the Ford Mondeo hatch weighs in with 550 litres of space, you get some indication just how much room those batteries eat up. 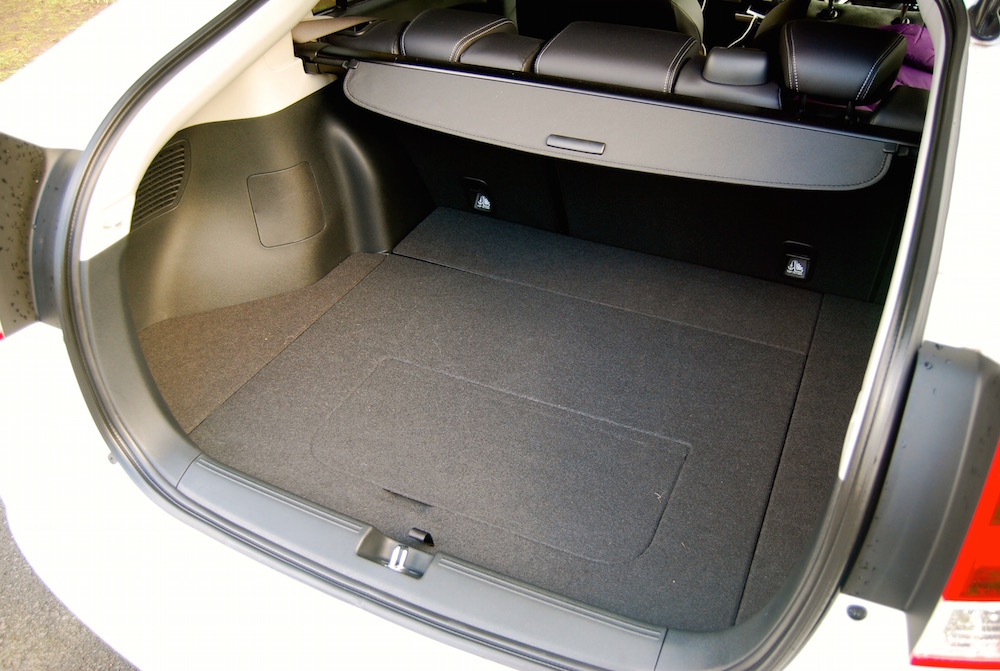 One of the first things you’ll notice when driving the Insight is the return of that split rear window that Honda are so keen on. It’s not so noticeable in the Civic, and you kind of expect some inconveniences like that in the CR-Z coupe, but having your rear view so impeded really affects the user-friendliness of the Insight as you’re constantly wondering if there’s something lurking in that blind spot. 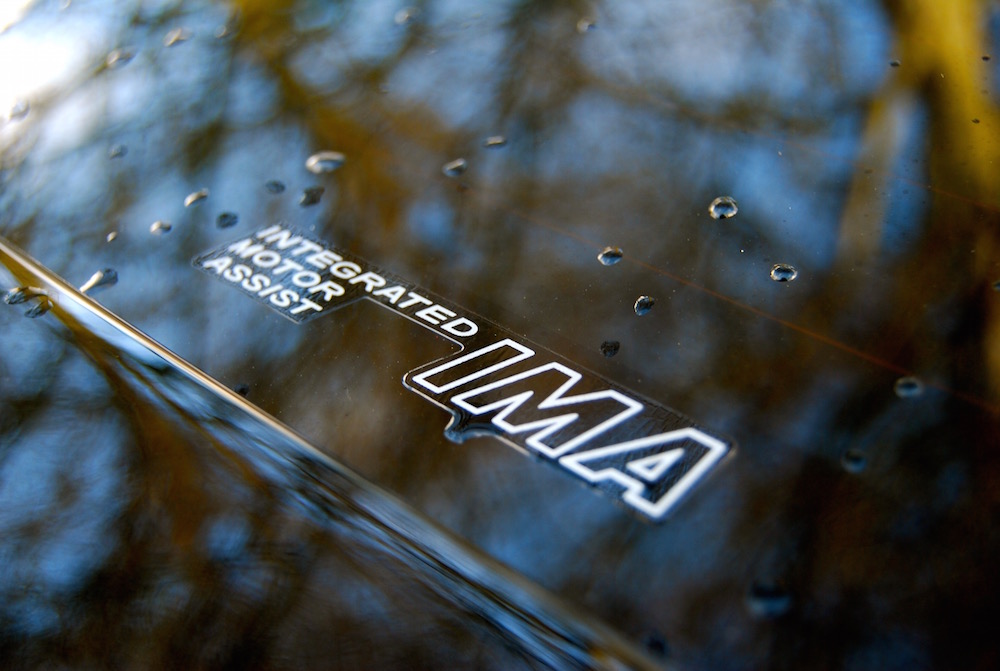 The electric and petrol motors work either in unison or on their own, dependant on what’s being asked of them. I was surprised to find that the electric motor very rarely went solo, even around town and with my most delicate of right feet on, but I was driving it in the middle of January when the heater was in constant use and batteries aren’t at their most efficient due to the temperature. There’s a highly addictive graphic mode on the Insight’s display that lets you know which motor is providing power and whether the batteries are being charged; it quickly becomes a priority to get those batteries topped up – unfortunately, producing fossil fuel hasn’t yet been achieved. 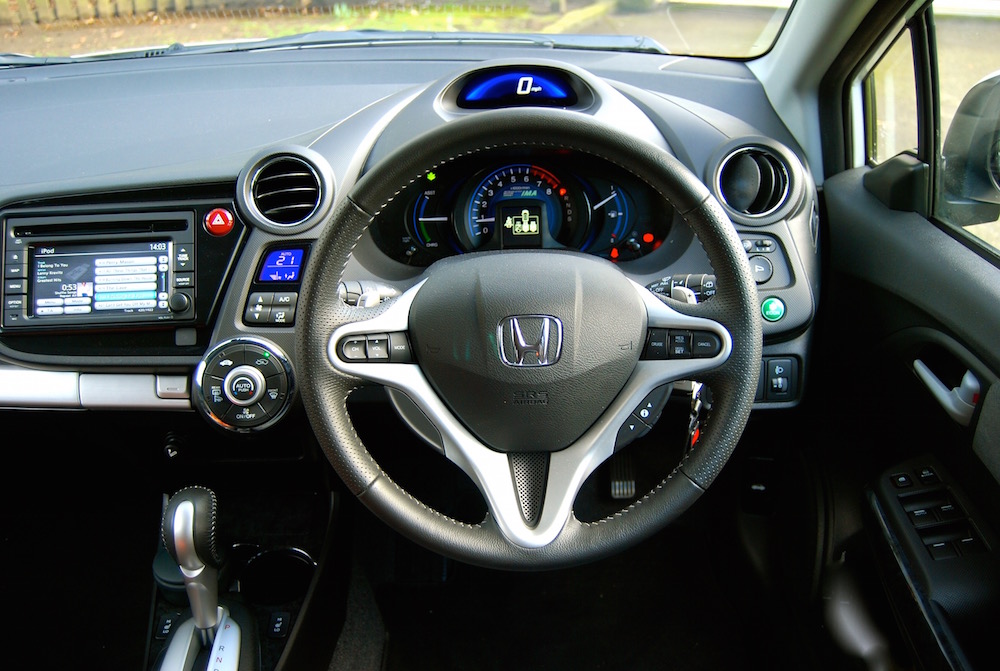 There’s an optional economy mode on the Insight (you can’t miss it, it’s a big green button with a tree on it), and I’m kind of thinking that if you’ve taken the decision to buy this kind of car, you’re pretty keen on keeping your driving as frugal as possible. One consequence of pressing this button is that it stifles the Insight’s responsiveness and power, as you’d expect from an economy mode, but it also squeezes every last drop of fun out of the driving experience, not that there’s much to squeeze.

Ask the Insight for anything approaching decent performance and all hell breaks loose in the noise department; the petrol unit revs higher, the electric motor whirrs like a demented food-blender, the CVT box screams an octave higher, but that’s about it. Progress is pedestrian, to say the least, and once you reach 60mph the ‘box and noisy low resistance tyres will sound like they’re near breaking point. This whole experience isn’t helped by a steering set up that feel completely disconnected from the wheels and a ride that skips nervously around your lane. Opting out of economy mode and putting the ‘box in its faintly ironic ‘sport’ setting does improve things a little, but isn’t that slightly beside the point? 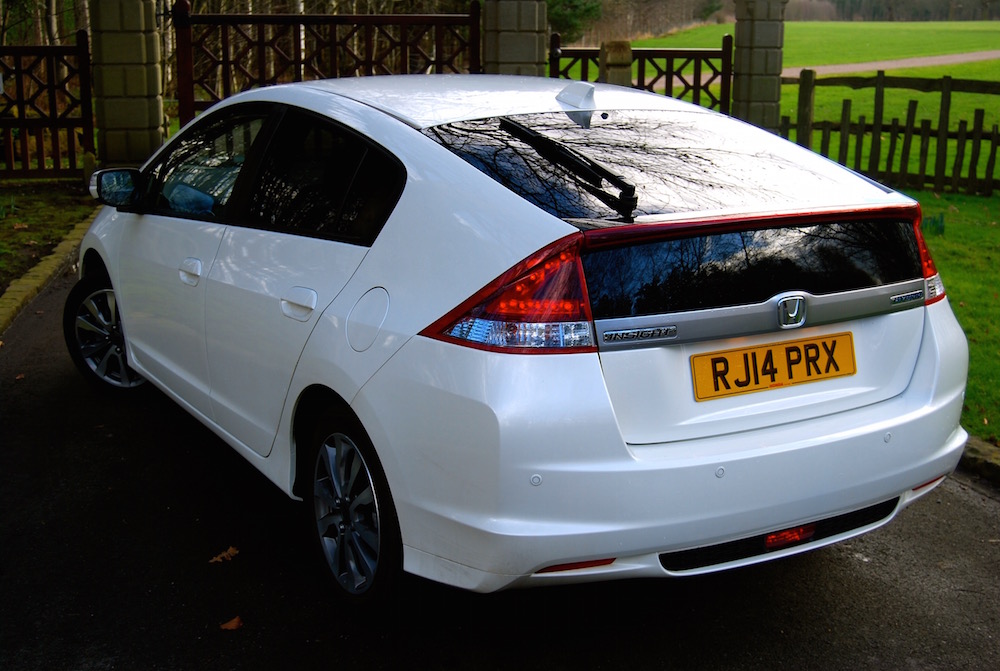 Should I buy an Insight?

So, the Insight doesn’t look that great, it feels cheap inside and the driving experience is borderline depressing, but surely it’s super-economical, right? Erm, no. Even its claimed 65.7 mpg combined isn’t that impressive, and the real-world 48mpg we achieved is even less impressive, which probably explains why Honda have made the wise decision to pull the Insight from its range. The problem is, it may have been a pioneer when it was launched, along with that Toyota, but the way technology has moved on in recent years has left the Insight as irrelevant and outdated.

I'm Ben Harrington and I'm a car lover, freelance motoring journalist and family-man (I'll let you decide the order!) I started Driving Torque in 2010 to share my love of all things motoring with the wider world. Since then, … END_OF_DOCUMENT_TOKEN_TO_BE_REPLACED