Back in the 1980’s, before imagination in car design went through an age of prohibition and Honda were producing some of the finest F1 engines ever seen, a distinctive silhouette emerged from the rising sun in the form of a quirky little fastback called the CR-X.

Although not miles apart from the omnipresent Civic (it was marketed as the Civic CR-X in some regions), it offered an air of originality and panache that simply weren’t an option on any available hot-hatch, a breed that was all-conquering at the time.

Skip forward a few decades then, and what we have here is the spiritual successor to the CR-X, in the shape of the Honda CR-Z – Honda wisely chose to leapfrog the CR-Y model, for obvious reasons. 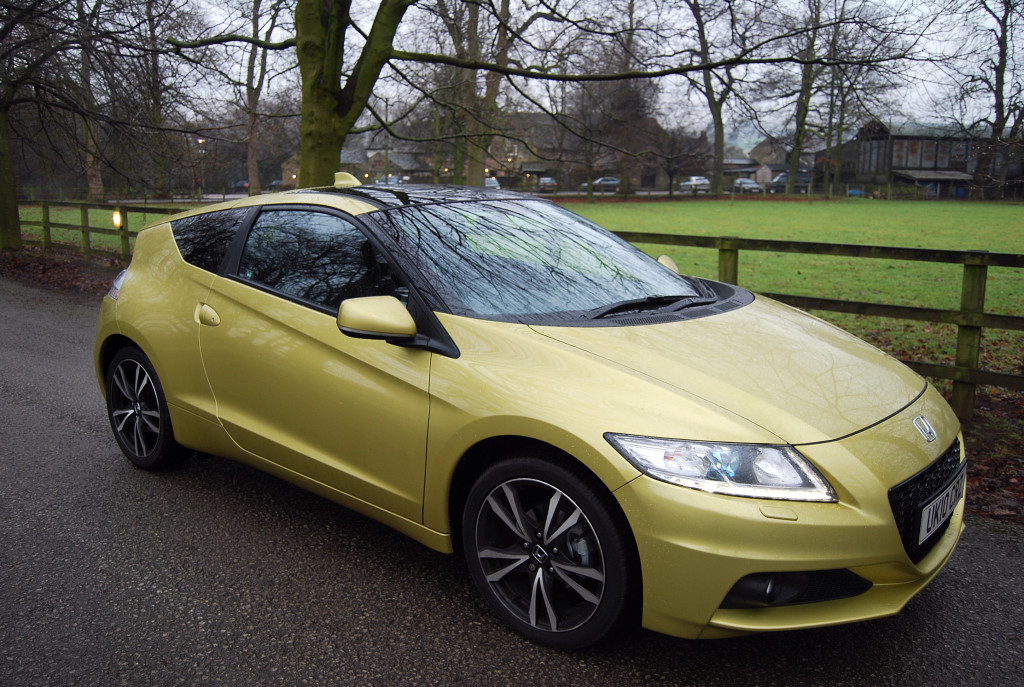 The styling is unmistakably similar. With its characteristic roof-line flowing seamlessly into the, near horizontal rear hatch before deviating dramatically south to form part of the flat rear end. There are yet more familiar styling cues elsewhere, in particular, the sweeping nose and long bonnet which share nearly the same gradient as the windscreen, cutting through any annoyingly resistant air like the proverbial hot knife through butter.

So, the family lineage is undeniable, they even both sport a fairly uncommon 1.5 litre engine, so can we assume that the CR-Z is simply another retro reproduction? I delved further in, to find out.

Love it or loathe it, the styling of the CR-Z is impossible to ignore. With its squat stance and more lines and folds than an origami swan, it gets attention wherever it goes. initial reaction from people I asked was roughly 50/50 for the love/loathe camps but this swung heavily towards love once the ‘Energetic Yellow’ aspect of our test car was hypothetically removed. I’m inclined to agree. 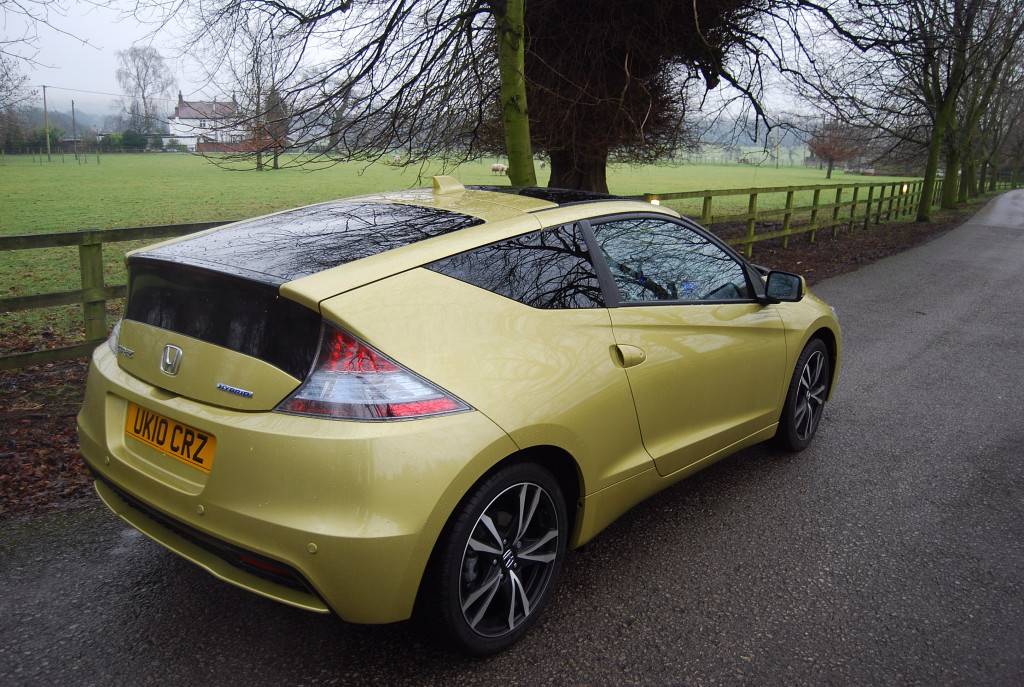 That said, the look of the CR-Z isn’t for everyone, but it’s great to see a car spark debate. Our roads are jam-packed with generic automobiles that are best described as ‘quite nice’. This isn’t one of them.

Assuming that you like the taste of  Honda’s Marmite car then, what else does it have to offer, apart from being a great initiator of discussion at dinner parties? Well, this is where things get a little paradoxical. If we were to judge this particular book by its cover, we could assume that it was a thrill-seeker, pure and simple, on a mission to rid the world of fossil fuels. Not true. You see, the CR-Z’s 1.5 litre petrol engine has a support band in the shape of an electric motor which throws its own 20bhp, and, perhaps more importantly, 78Nm of torque  into the equation. 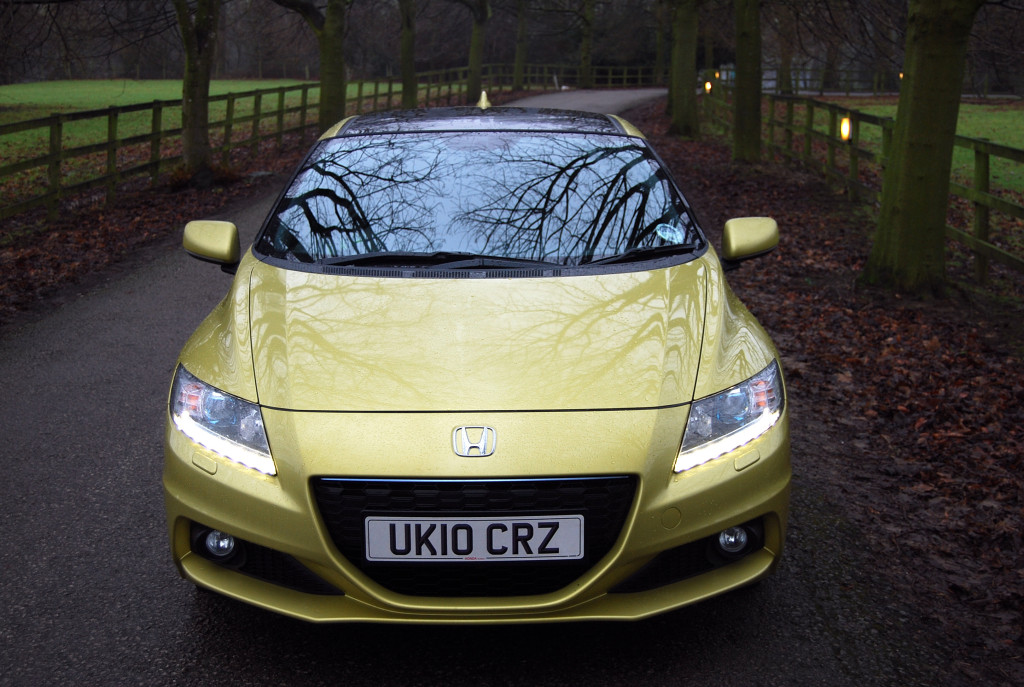 Better still, there’s a little blue button on the steering wheel, marked S+. This stands for Plus Sport and is linked to the CR-Z’s 15KW electric motor (up from 10KW for the 2013 model). One press whilst accelerating and all of a sudden you’re Jensen Button, using his KERS facility to overtake Vettel on his way to a Grand Prix victory. It does take a while to recharge if it’s used to it’s full extent but it’s certainly more than just a gimmick and can quickly become very addictive.

There is, of course, a price to pay for the extra help the batteries provide and, as usual, it’s weight. The CR-Z does an admirable job of disguising its additional mass and rarely gets ruffled, even on rapidly altering roads. Gear-changes are neat and precise with a very satisfying ‘clunk’ between each ratio. I personally prefer a little more weight behind my ‘box but the CR-Z’s light, clinical, short-shift approach will undoubtedly appeal to many. 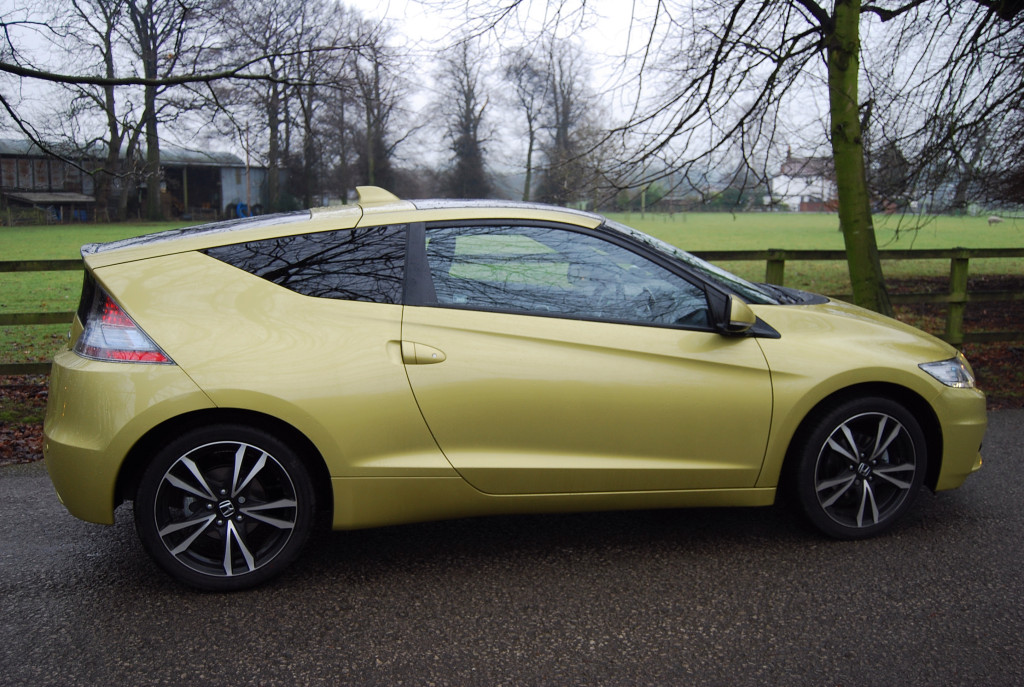 17” alloys are standard on GT models

What no car can do though, even one this clever, is totally rewrite the laws of physics; push the CR-Z hard and the electronic assistance will disappear fairly quickly, leaving the 1.5 litre engine to singlehandedly lug around a pretty-heavy coupe with no help from the now redundant, weighty batteries. When this does happen, performance suffers greatly and economy figures will rapidly tumble from Honda’s claimed 54.3 mpg combined. 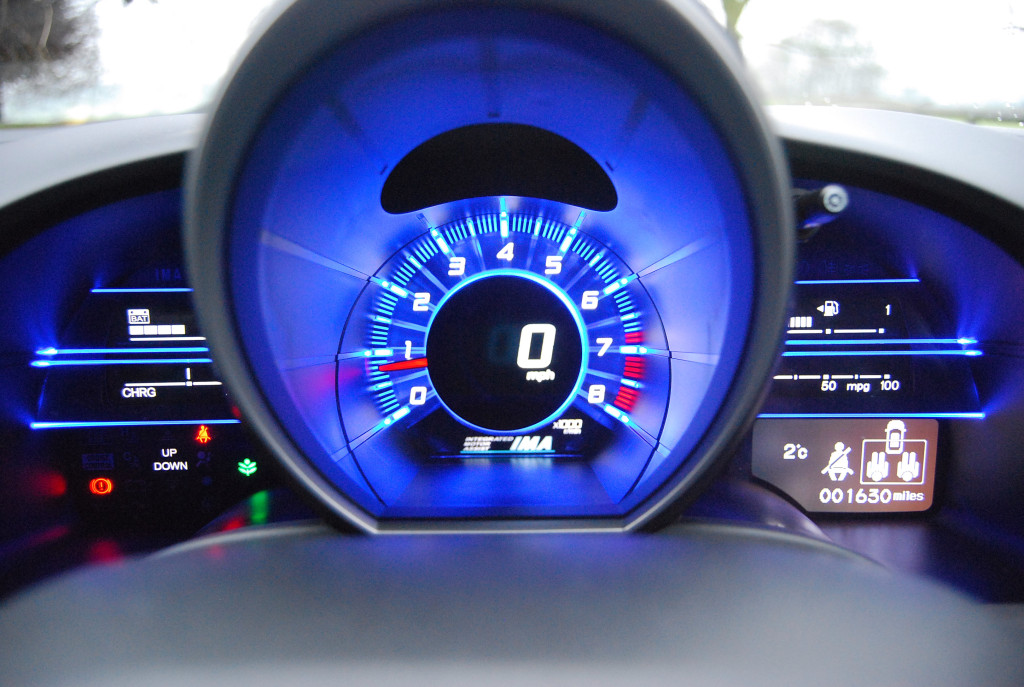 Quite a distinctive view from the driver’s seat

A very pleasant surprise in the CR-Z comes by way of its innovative interior. Japanese cars have long been dogged with a reputation for blandness and a lack of quality in this department but the CR-Z brings a whole host of new toys to the table. If, like me, you’re sick of dull grey plastics and those generic LCD clocks that have cheapened Japanese cars for years then this will surely be a breath of fresh air. With its neon bright, 3-dimensional driver’s gauges that forcefully grab one’s attention, the cabin could possibly be described as ‘busy’ and I imagine that it could become slightly irritating on a long journey. I, for one, appreciate its originality though, it reinforces that this car is a little leftfield and quirky, just like it’s CR-X ancestor. 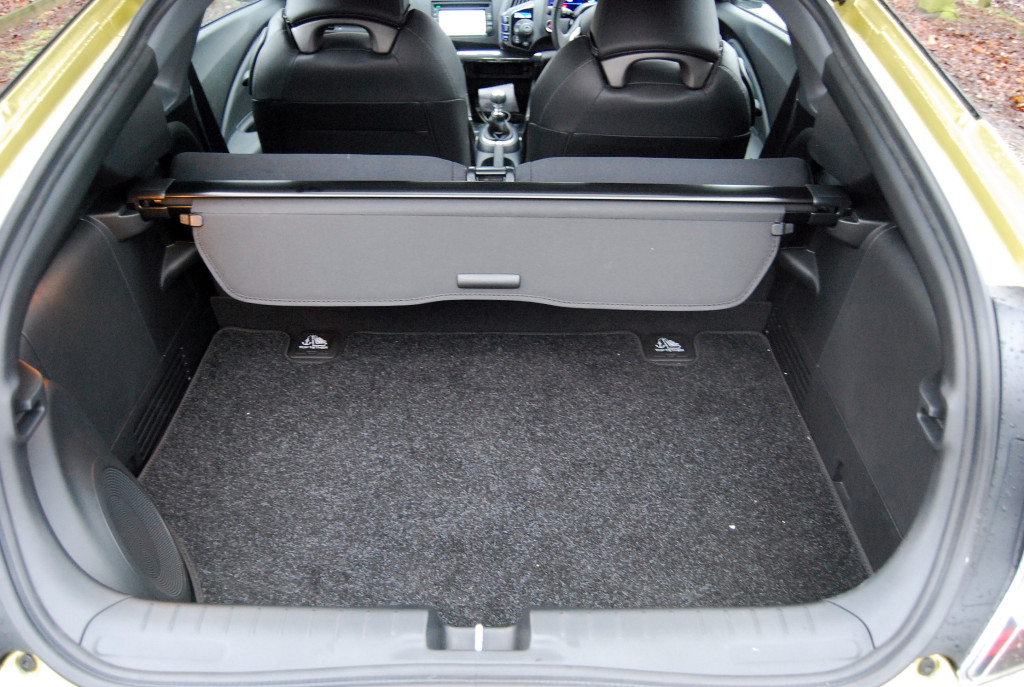 One aspect of the CR-Z that should be made perfectly clear is that this is no family hatch – it’s a true 2+2. The rear seats are only large enough for the youngest of children – and even then I’d recommend short journeys only. Getting aforementioned small children in and out of the rear seats will quickly prove irritating too, as the front seats don’t return to their original position after access to the rear has been gained. This, and the lack of boot space due to the position of the Lithium Ion batteries, reinforce the assumption that Honda weren’t aiming at the family market when the CR-Z was pencilled. Anyone who wants a little more in the way of practicality should possibly hang on for the return of the Civic Type-R that’s recently been announced. 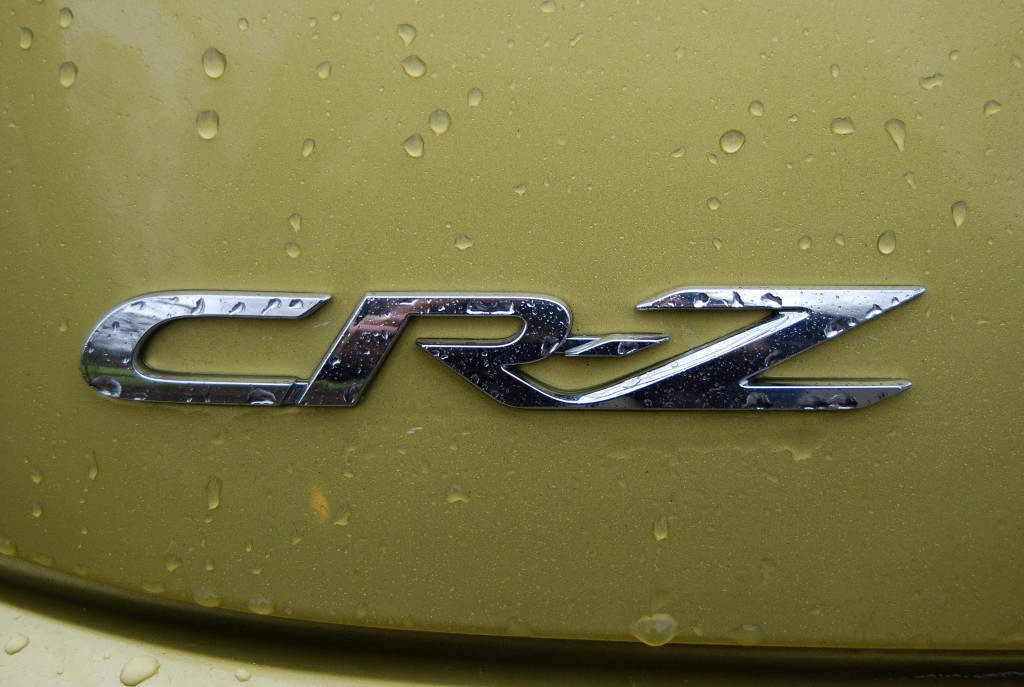 So, just what is this little car then? Is it a sports car or an eco-warrior? A ’80s throwback or a glimpse of the future? The truth is, it’s a bit of everything and Honda have admirably provided a bit of eye-catching glamour without the usual associated guilt. At nearly £25k though, this top spec GT-T model is sailing dangerously close to some tasty competition, in particular the Toyota/Subaru GT86/BRZ. Look at the cheaper Sport spec models however and for just over £20k, you could have a desirable little coupe with some very impressive numbers – 56mpg and 116g/km CO2. Makes sense, doesn’t it?

I'm Ben Harrington and I'm a car lover, freelance motoring journalist and family-man (I'll let you decide the order!) I started Driving Torque in 2010 to share my love of all things motoring with the wider world. Since then, … END_OF_DOCUMENT_TOKEN_TO_BE_REPLACED