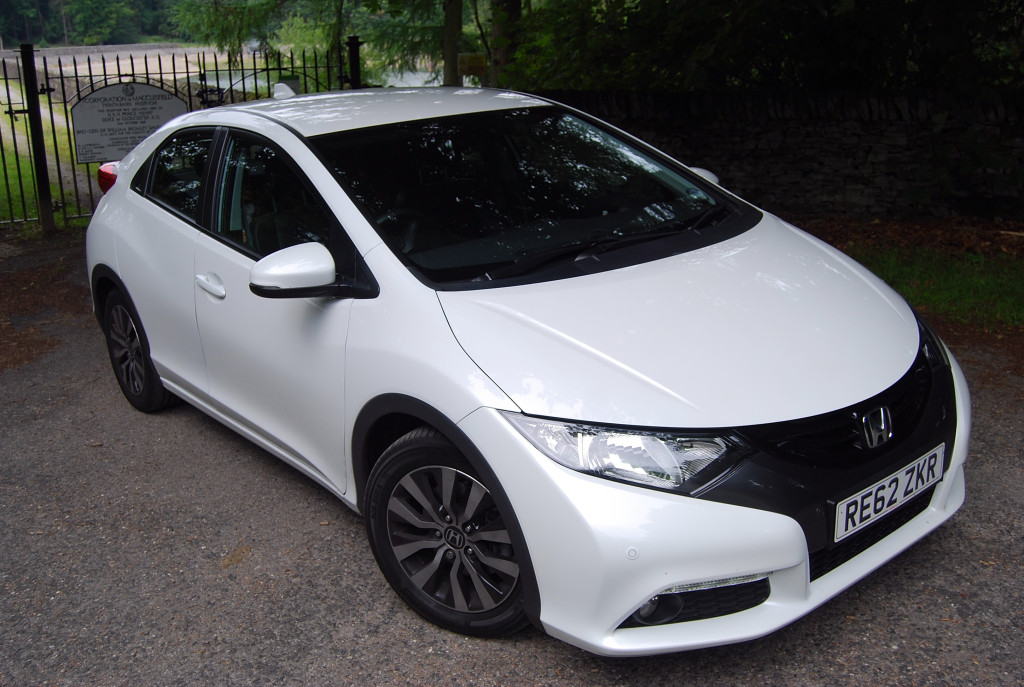 Civic certainly couldn’t be mistaken for anything else

Within the last decade, Honda‘s ever-so-popular Civic has gone through something of a transformation, particularly in the identity department. It wasn’t so long ago that the Civic moniker was seemingly plonked on just about any size or shape of Honda, as if they’d actually exhausted the world’s supply of car names. Seriously – just Google ‘1990s Honda Civic‘ and the range of images that appear is strangely reminiscent of a bag of pick and mix – they may all be sweets, but no two are the same.

Not any more though. The modern-day Civic is definitely a mid-size hatchback in the Focus/Golf/Astra mould, which means it’s picking some pretty brave fights with some serious competition. This particular Civic i-DTEC is equipped with Honda‘s much-lauded new 1.6 litre Diesel engine, dropping it right in the middle of what must surely be the bloodiest of fights, as families and businessmen alike strive to achieve as much bang for their buck as possible, either on the forecourt or in the tax office. 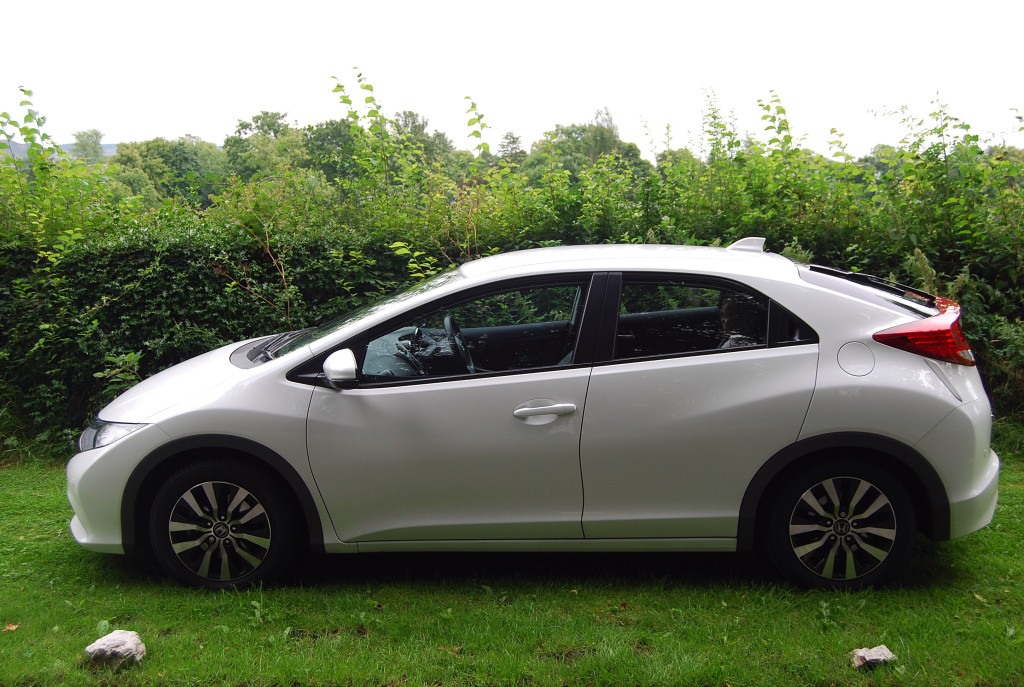 This generation of Civics has been with us for a while now and yet it still manages to stand out as something a little bit different. It could be said that it’s styling was deemed a little controversial upon launch and some of the previous generation’s charm had been sacrificed in favour of a flurry of awkward angles and design features. Personally, I find the Civic’s quasi-futuristic appearance and apparently absent rear door handles increasingly appealing, especially when set against the backdrop of some of its competition, many of which seem to be morphing into the same, staple shape. 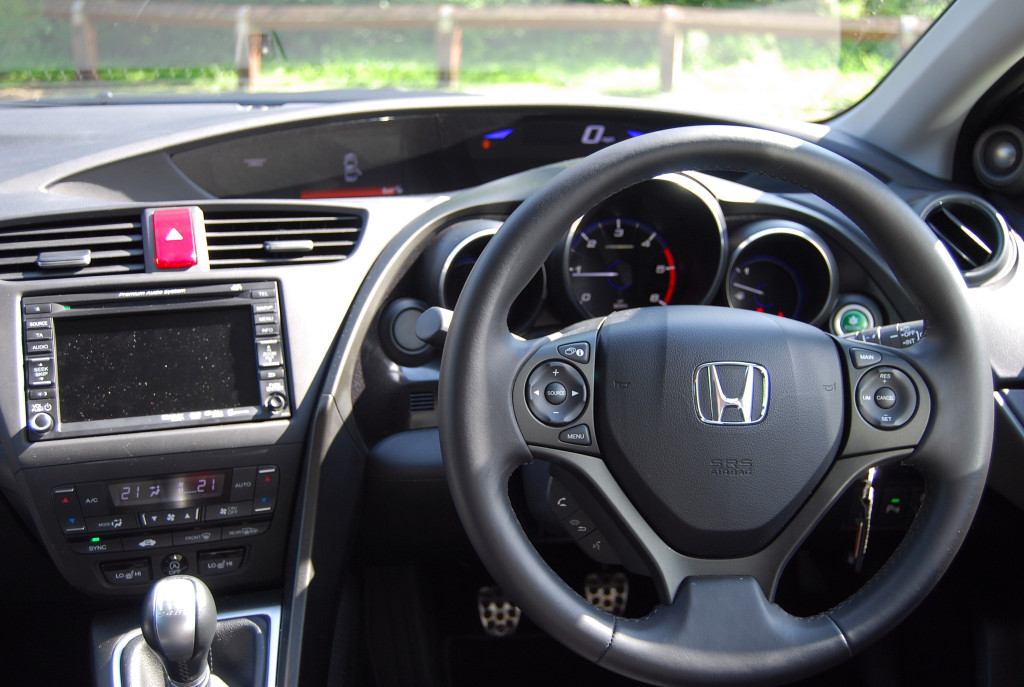 The theme continues inside the Civic i-DTEC, with a multitude of eye-catching shapes and features that set the car apart from, well, anything else. Sit in the driver’s seat and the first detail of note is the two-stage digital dashboard, adorned with near day-glo illumination. This dual-height approach to the information one requires when driving could initially be described as a little unnerving; just as the perfect driving position is achieved and one feels very much ‘in’ the car, rather than ‘on’ it, a glance at the lowermost dials completely alters one’s perspective, encouraging more fettling of the seat and steering wheel to feel less upright. The answer is to overcome this urge to modify and stick with it, it doesn’t take long for the whole experience to feel completely natural with an engaging driving position. 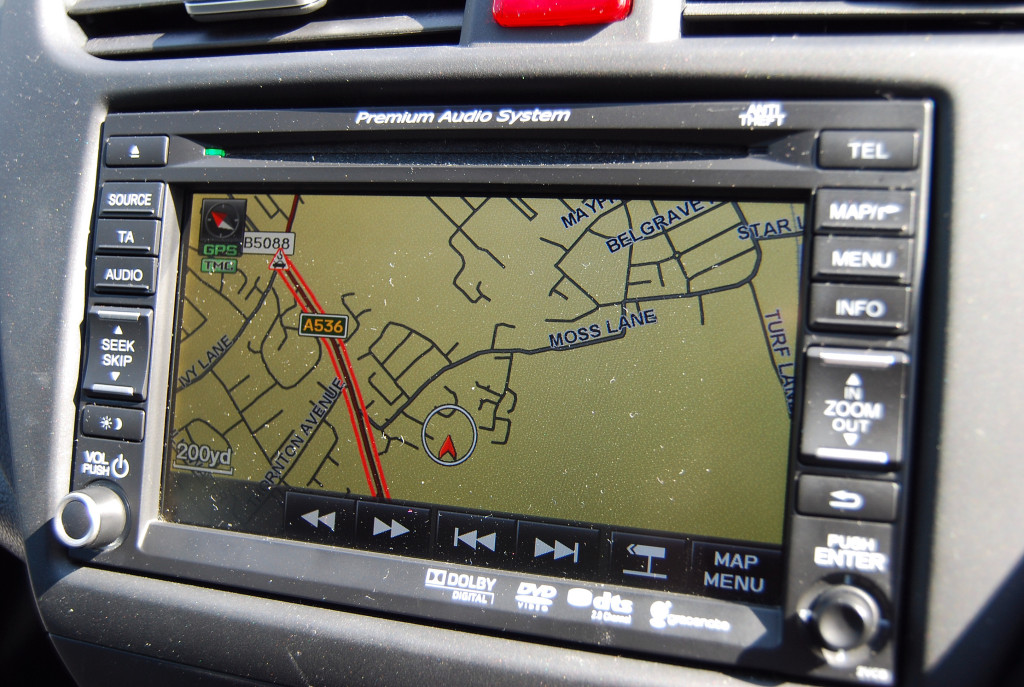 An easy trap to fall into with the Civic’s interior, in particular it’s slightly lairy dashboard and Casio-calculator-watch-esque multimedia system, is to start wishing that the whole thing were a little more, well, German. This fondness for the subtle, understated approach to things, that certain manufacturers such as Audi have adopted is entirely understandable, if a tad unfair. Honda are proud to be Japanese and are quite rightly doing things their way. It’s good to see this approach every now and again as life would be so boring without individuality. I say – if you want a car with a Germanic approach to interior fittings, buy a German car.

This class of car simply wouldn’t work if its interior space were significantly inferior to the competition and this possibly explains the Civic’s expansion over the previous model. I felt comfortable and well accommodated in every seat, my only slight wish would be for a touch more headroom in the rear for long journeys. 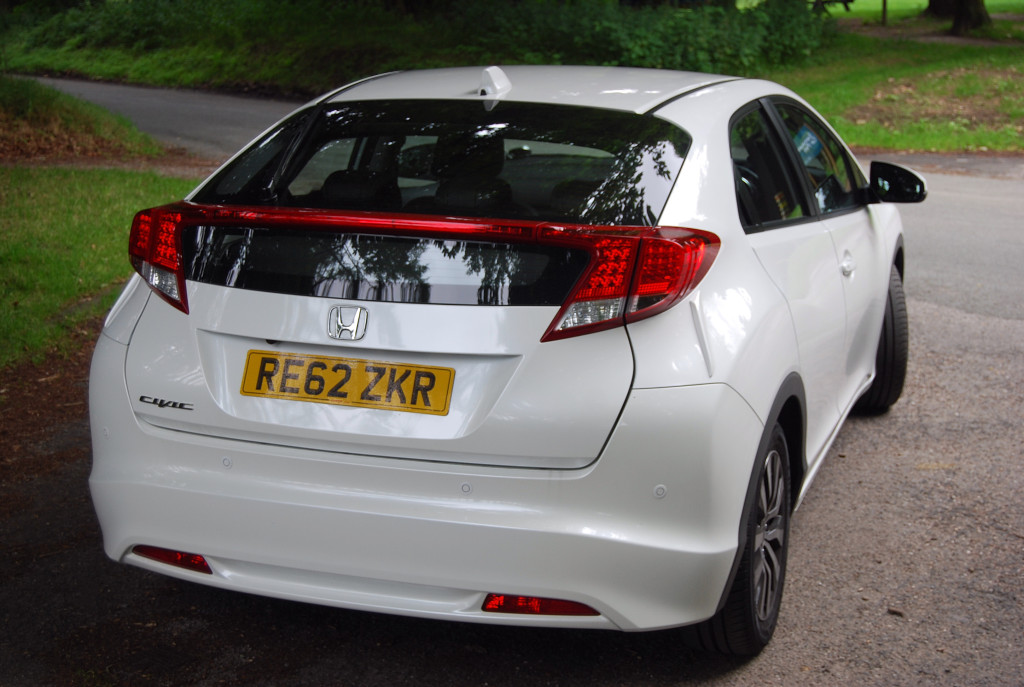 Sit in the driver’s seat of the Civic and a glance in the rear view mirror presents something of a fly in the car’s ointment – a large bar bissecting your view of what’s being left behind. It may look pretty from the outside but the truth is that this dual-screen effect which Honda are so keen on utilising does, in reality, irritate. All but the lowest spec Civics come complete with a rear view camera and I’d say it’s almost essential to assist when reversing. Our top of the range EX test car was also blessed with parking sensors, I’d tick this option every time to counteract the compromised view and hopefully save a few trips to the bodyshop. 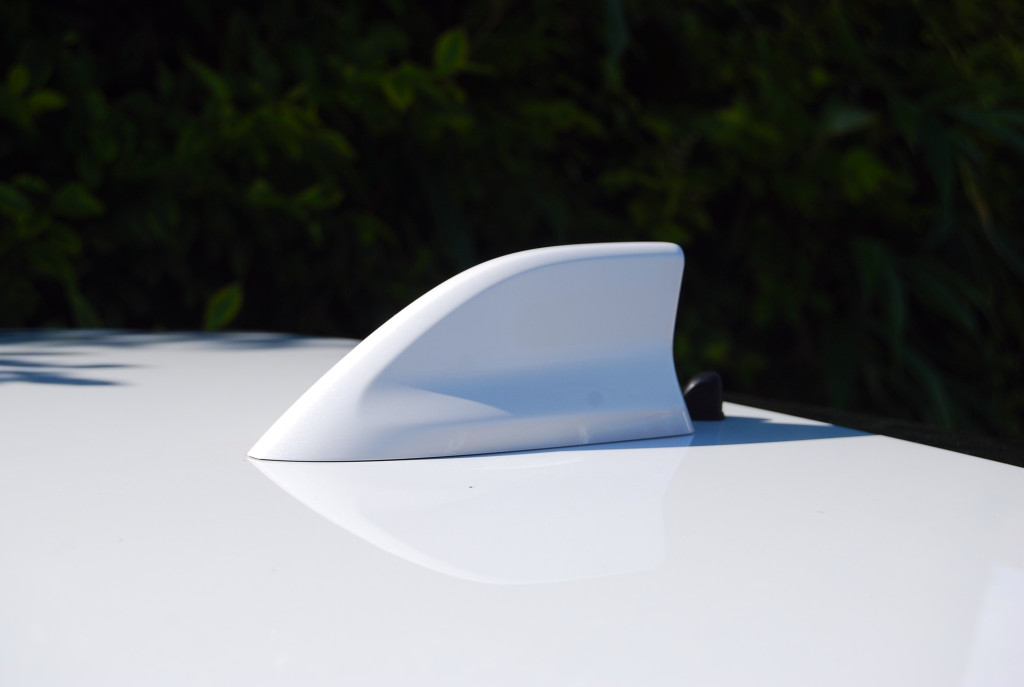 Civic is covered in fins – here’s a sharky one…….

So, that’s the living space covered, what about the oily bits? Honda’s new 1.6 Diesel engine has been received with much fanfare and is destined to find its way into as many Honda products as is reasonably possible. So what’s all the fuss about? Cold start-ups – traditionally the leveller of oil-burners due to unrefined rattles, present very little in the way of noise or vibration, even on the outside. Once thoroughly warmed however, you’d be hard pressed to hear which fuel you were burning, the noisiest aspect at civilised revs being the car’s air-conditioning fans.

The manual ‘box in the Civic is a joy and seems so well suited to the torquey nature of this Diesel lump. Changing gear can become something of a novelty, as the engine’s 300NM of torque pulls the car along across the entire rev-range with little complaint, even at lower revs where you might usually expect some labouring. 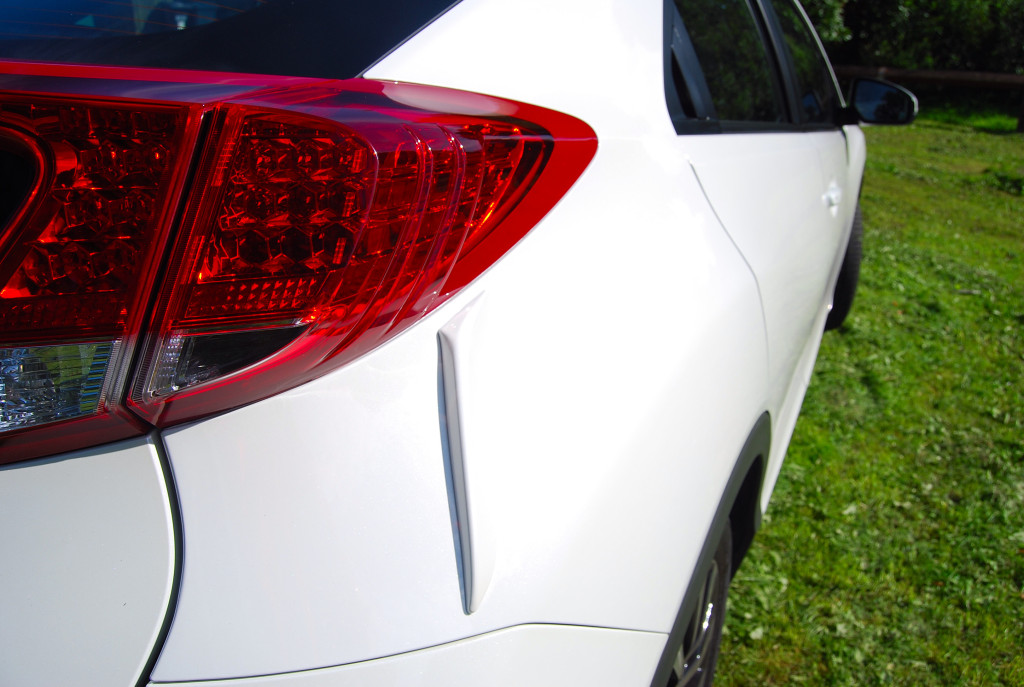 Honda claim that the Civic, when mated to the 1.6 Diesel will achieve 78.5mpg and 94g/km, making it VED exempt. These economy claims are sometimes unattainable though and history has taught us to take them with a sizable pinch of salt. Apparently not so in the Civic though; when brimmed with Diesel, the range is a predicted 650 miles. After two days of care-free driving with little thought for conserving fuel, the needle on the Civic’s fuel gauge was still stubbornly clinging onto ‘Full’ like a long, thin limpet, the range had also somehow crept UP to 850 miles. Have Honda secretly achieved perpetual motion? Hmmmmm…..

Handling in the Civic is civilised and reassuringly predictable. It flows through corners with constant communication through the steering wheel so that any understeer is expected and easily corrected. The power steering is massively assisted though, so don’t expect handling to be quite up to the standards of the eminently impressive Focus.

The engineering expertise that Honda are so renowned for simply screams out of the Civic in a way that belies its sub £20K starting prices. Driving one is a pleasure, with a sensation of quality that would put many, far more expensive products coming out of Bavaria to shame. All this, mated to Honda’s  excellent new engine and the usual extras found as standard, results in a package that’s very hard to argue against.

I'm Ben Harrington and I'm a car lover, freelance motoring journalist and family-man (I'll let you decide the order!) I started Driving Torque in 2010 to share my love of all things motoring with the wider world. Since then, … END_OF_DOCUMENT_TOKEN_TO_BE_REPLACED