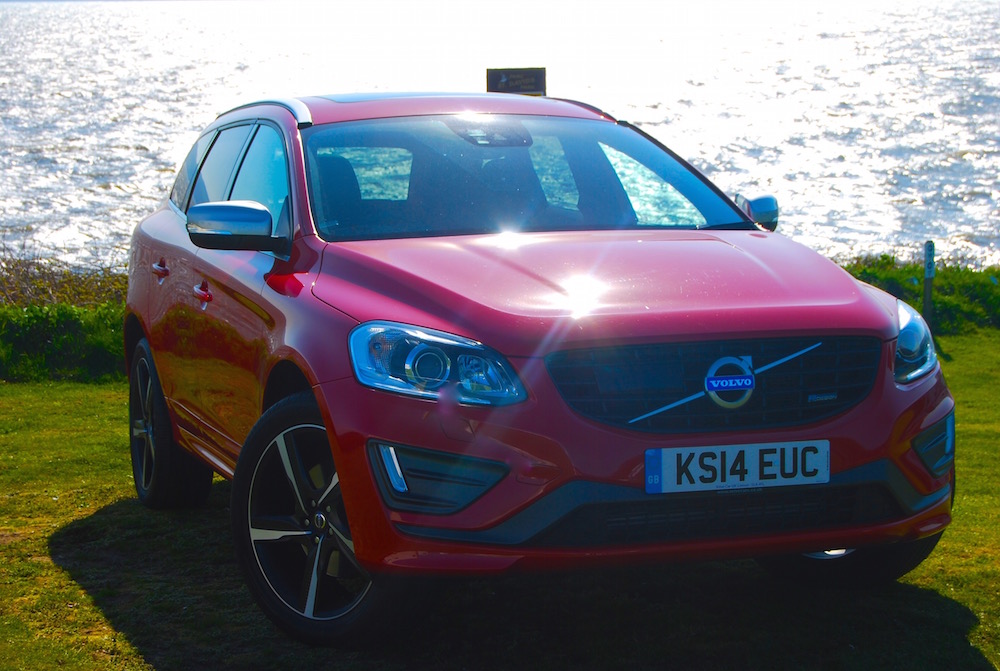 2014 facelift aside, the Volvo XC60 has graced our roads in the same basic shape we have here since 2008, and it’s been a runaway success for the Swedish marque.

This isn’t just any XC60, though – this is the rather sexy looking R-Design Lux. But perhaps more importantly, it’s also packing a new 2.0l diesel engine under the bonnet that claims to squeeze over 62 miles out of every gallon of juice, whilst emitting a taxman-friendly 117 g/km CO2. On the face of it, then, this XC60’s conscientious, striking and as it’s a Volvo, it’ll look after your family like a particularly attentive German Shepherd (or Swedish Lapphund) on guard duty.

SUV design seems to fall into two categories; there’s the traditional, boxy shape that stems from the original Jeeps and Land- Rovers, and then there’s the more sleek, modern silhouette that don’t live in denial of the existence of the wind-tunnel.

The XC60 definitely falls into the latter category. Its big brother – the XC90 has recently been completely renewed, but if you look at the outgoing model, the XC60’s inspiration is easy to see. With its muscular shoulder-line and steeply raked windscreen, it’s so obviously a Volvo SUV, and its new, more aggressive face has kept it looking as modern a design as when it was released. 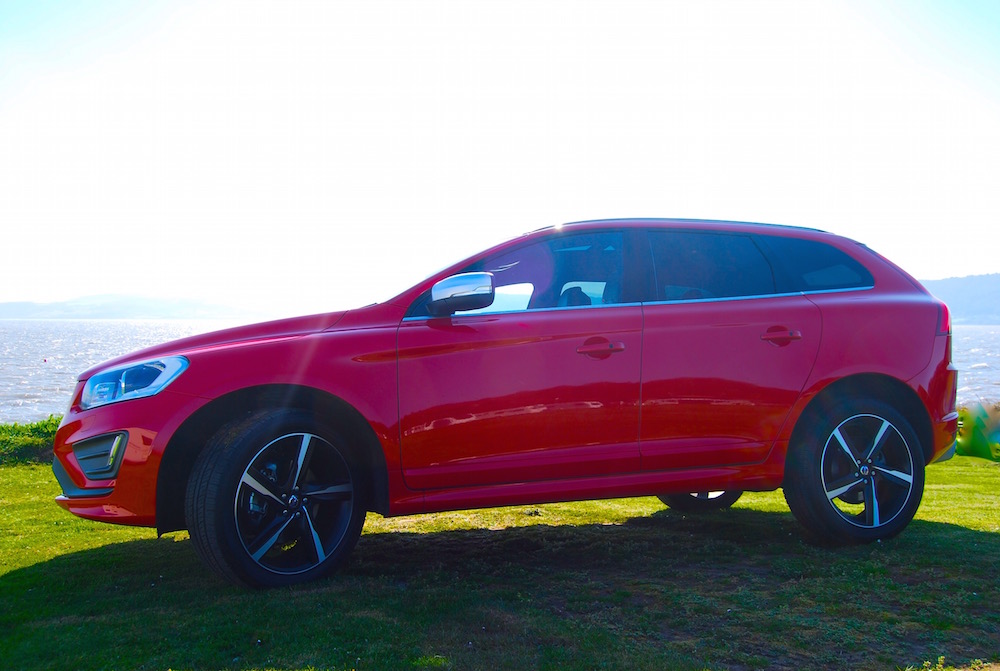 The inside of the XC60 has had a bit of a tickle, too. Recent Volvo interiors are amongst my favourites thanks to some interesting materials and that floating console which still looks fresh and innovative .The XC60’s cabin is now in-keeping with the rest of the Volvo range and the driver focussed central dash suggests a certain attention to detail that backs up the XC60’s air of quality. 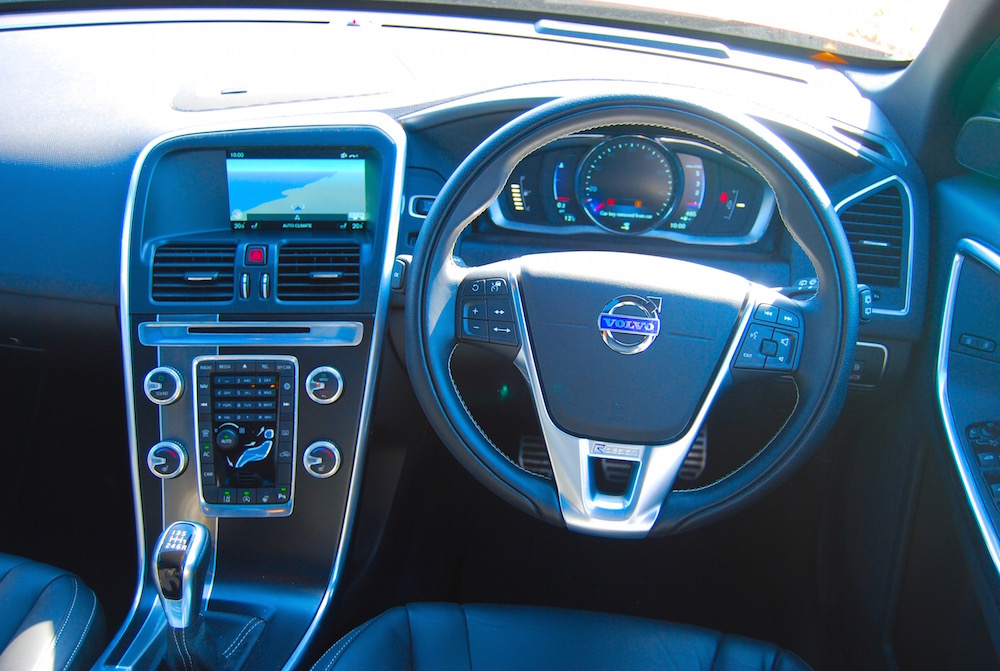 In these days of electronic hand-brakes, there doesn’t seem to be an industry standard governing their operation, i.e. does pushing the button turn it on or off? It’s therefore a breath of fresh air to see the XC60’s  hand-brake button has simple instructions written on it in full view; those Swedes do common-sense so well.

Speaking of clever touches, if you’ve got children or you’re possibly investing in some in the near future, the XC60 has a great optional extra for you. For a mere £295, the rear seats come with integrated booster seats which are erected or stowed away at the touch of a button. I’ve often looked at regular booster seats and thought they seemed a tad lacking in comfort, and they’re a pain if an adult gets in the back. These built-in alternatives look far more forgiving and they went down very well with my 5 and 6 year-old guinea pigs.

That said, it’s not perfect. If you spec your XC6o with a manual ‘box, changing gear whilst simultaneously stowing a coffee in the cup holders is a bit fiddly. I also managed to activate the memory seats whilst getting out of the XC60 as enough weight on the seat bolster will make it come into contact with the controls: slightly disconcerting when you’re not expecting it. 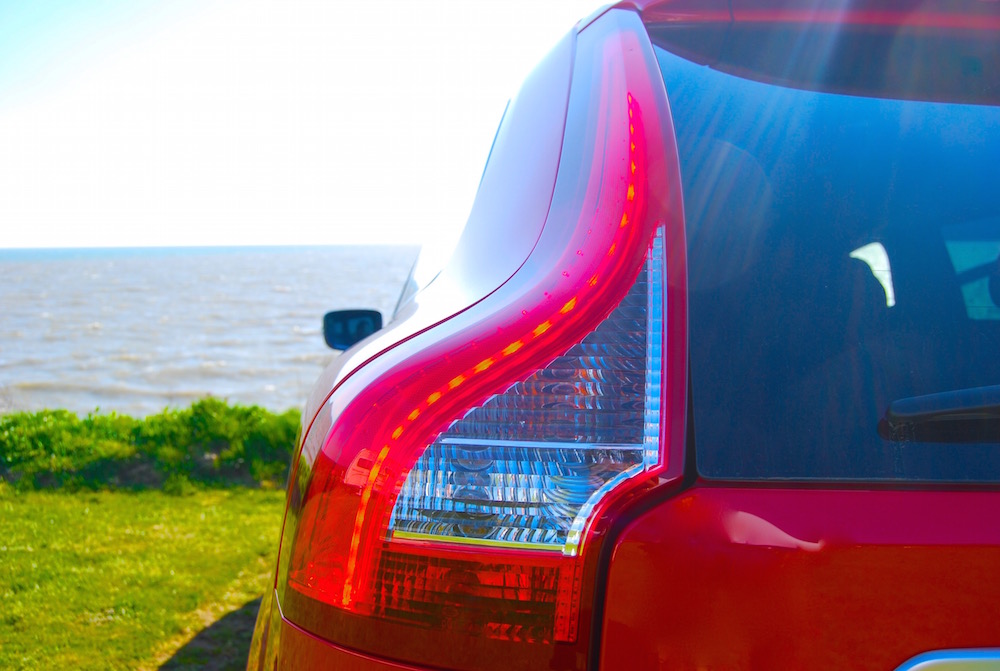 This wouldn’t be a Volvo review if the subject of safety didn’t come up, so here’s a little pointer to consider: can a car be too safe? By this, I obviously don’t mean how well a car performs in a crash, I mean – can a car be stuffed so full of aides to avoid crashing  in the first place that they ultimately become a distraction or get deactivated because they’re just annoying?

The good people at Volvo would naturally disagree with what’s a slightly controversial view, but when a car’s constantly beeping, bonging and flashing to warn you about 101 potential disasters such as other road users it deems too close, or hedgerows in your blind spot, it can become a hazard in itself. A lot of these safety features are included in the optional £1,900 ‘Driver Support Pack’, and that’s a small price to pay for ultimate peace of mind, just be prepared for an occasional attack on the senses if you do tick this box.

This range-topping R-Design Lux is eye-catching whilst remaining classy with its more aggressive grille, twin exhausts and deeper sill. It handles well considering its relatively lofty stance and front wheels providing drive, and there’s enough feedback through the wheel to keep things interesting, just don’t expect much in the way of off-road prowess. 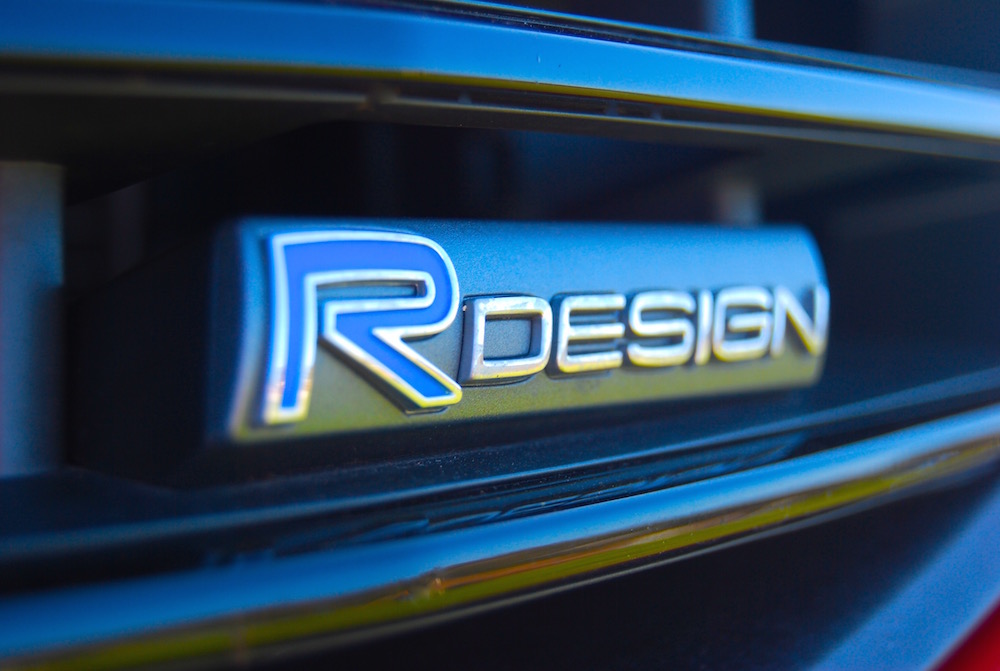 Careful with the options

Part of our XC60’s striking looks and sportier handling are down to its optional 20″ Ixion wheels (£1,200), and they are a beautiful, delicate design. When coupled with the R-Design’s stiffened suspension, though, the ride becomes jarring over less-than-perfect surfaces. The R-Design pack comes as standard with the same wheel in a far more compliant 18″ diameter; it doesn’t look quite as striking but you’ll probably be grateful for the extra rubber. 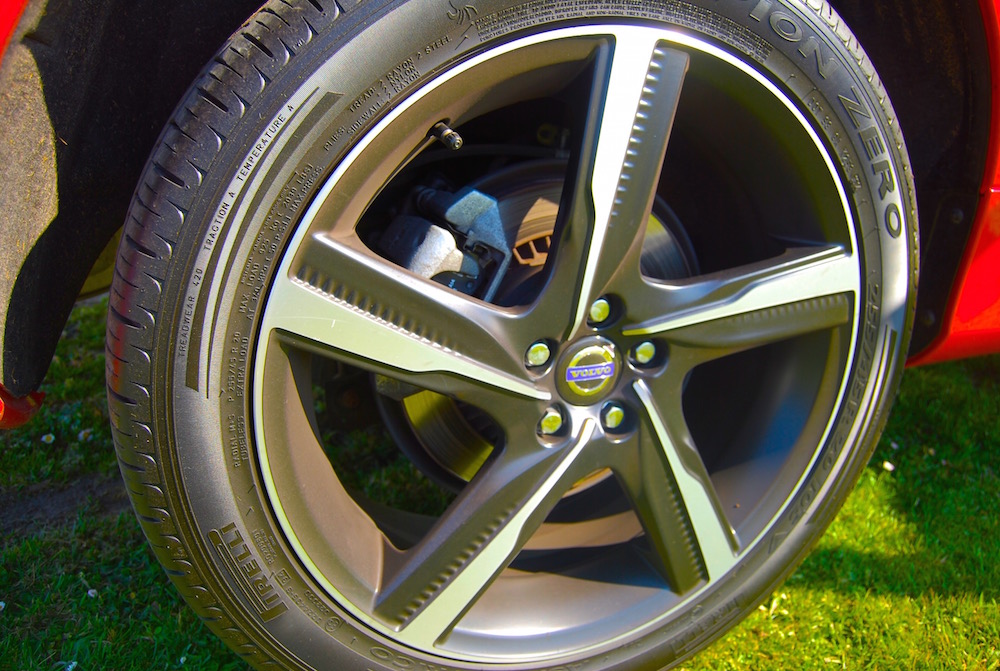 A real plus for this XC60 is its new ‘Drive-E’ 181bhp engine which represents a huge leap forward for Volvo. When one considers that this is an SUV with a kerb-weight approaching 1.9 tonnes, its 8.1 second 0-60 time whilst only emitting 117g/km Co2 and combined mpg of nearly 63 are a real achievement and put the XC60 ahead of its rivals in terms of both performance and economy. Yes, it’s a bit typically rattly on start-up, but there’s not a hint of noise from inside the cabin, and it feels so alive and responsive for such a frugal engine that I think we could forgive it a bit of noise. 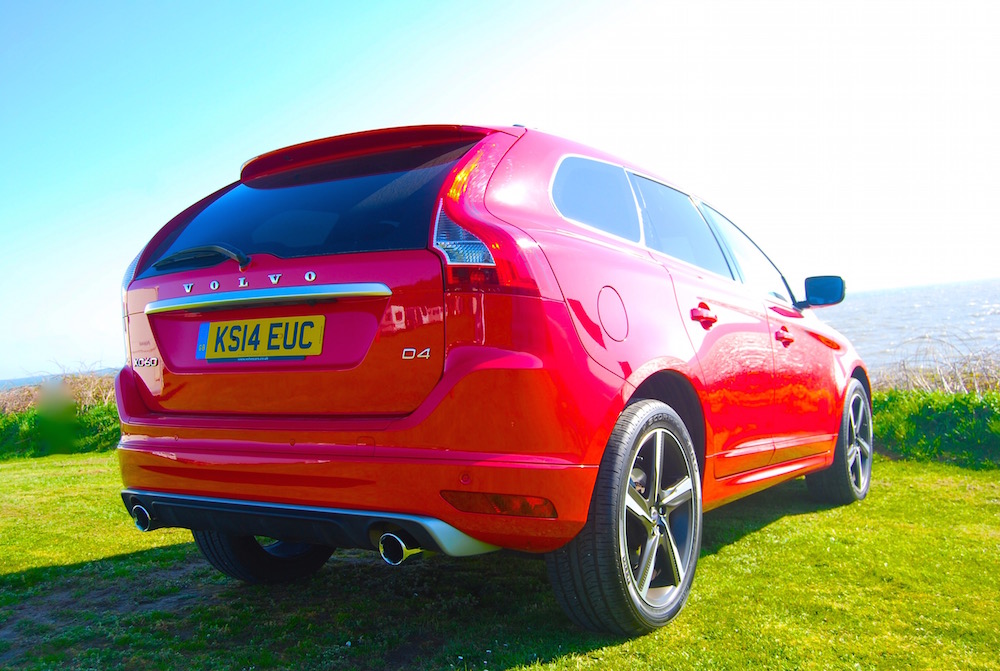 As I mentioned earlier, this FWD XC60 was designed and built for tarmac and possibly a dirt-track at best. If mud-plugging is going to be part of your XC60’s everyday life, you’ll obviously need 4WD, but that means you’ll be stuck with the previous-gen 2.4l  diesel unit which is significantly slower, dirtier and thirstier than the new 2.0l engine. Shame.

The XC60 might be a little long in the tooth these days and a replacement can’t be too far off. As long as FWD is enough though, with this new range of Drive-E engines, its performance and economy figures put a lot of the competition to shame.

For full details go to www.volvocars.com

I'm Ben Harrington and I'm a car lover, freelance motoring journalist and family-man (I'll let you decide the order!) I started Driving Torque in 2010 to share my love of all things motoring with the wider world. Since then, … END_OF_DOCUMENT_TOKEN_TO_BE_REPLACED