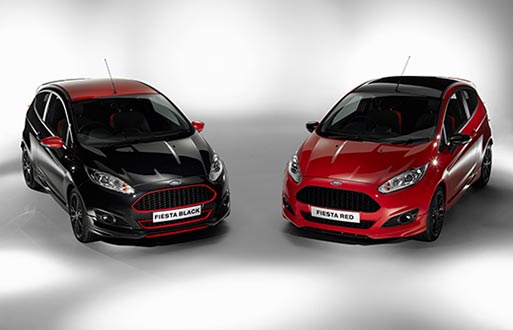 So, you quite fancy the idea of a Ford Fiesta ST – who wouldn’t? Unfortunately, though, your age/bank balance/less than squeaky clean licence makes the ST’s insurance group unaffordable, so what do you do? Well, there’s the Fiesta Zetec S which comes with Ford’s excellent 1.0l EcoBoost engine in 138bhp guise – just 40 less than the ST – but you find the Zetec S is comparatively a bit………how shall I put this……….dull looking?

Well, help is now at hand in the shape of the Fiesta Red & Black Editions, based on the Zetec S platform but rather more striking looking in either black with red highlights or, you guessed it, red with black highlights.

We’ve obviously got the Red Edition on test here and, although it’s handsome enough with its gloss black wheels, it’s the Black edition that really stands out in a crowd, mainly thanks to a coat of bright red lipstick. 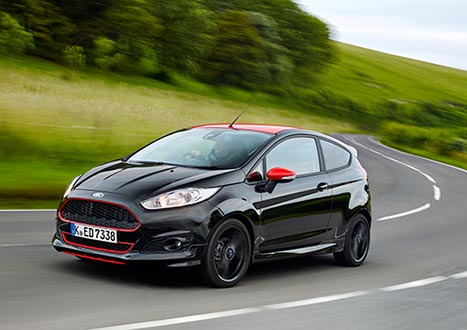 The Black Edition’s eye-catching looks come at a premium, though, and at £16,845 it’s £500 more than the Red edition at £16,345 OTR. This corresponds almost perfectly with the extra cost of having your Fiesta in black rather than the free-of-charge red, and both special editions are just £100 more than the similarly specced Zetec S models they’re based on. 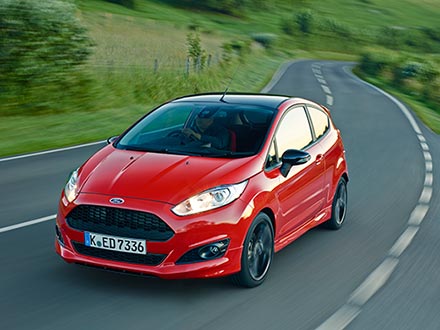 What does the £100 get you, then? Well, your standard 16” alloys are binned in favour of some rather natty looking 17” 8-spoke black rims and on the inside they’ve thrown in a few cow-hides, including one around the steering wheel, and there’s copious amounts of red stitching dotted around the place – essential for any self-respecting hot-hatch. Admittedly, the Black Edition is a bit more ‘special’ looking than the Red, and you’ll probable feel that you’ve got even more for your £100 over the Zetec S base. 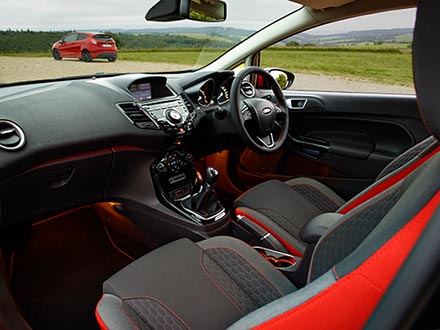 Is the term ‘hot-hatch’ a bit of a step too far for this Fiesta, though? Well, in all honestly, in this day and age it probably is, yes, as the big-boys creep closer and closer to sub 5 second 0-60 times. These Black and Red Edition Fiestas may look quick but essentially their 3-cylinder, 1.0l units will only get them to 62mph in 9.0s – that’s the same as the 1.6l 205 GTi which is 30 years old next year!

Being a Fiesta, though, it’s a hoot to drive, especially with its sports suspension set up, and it’ll average 63mpg whilst emitting just 104g/km CO2 so VED is practically nothing. You only get drum brakes at the rear so stopping isn’t quite as keen, and it comes with a run-of-the-mill 5 speed ‘box, instead of the ST’s 6 speed, so the drive is diluted somewhat.  The Fiesta Red & Black Editions aren’t the cheapest car in the segment by any means, but for thrills and looks per pound, they fight well above their weight.

For full details go to: www.ford.co.uk

I'm Ben Harrington and I'm a car lover, freelance motoring journalist and family-man (I'll let you decide the order!) I started Driving Torque in 2010 to share my love of all things motoring with the wider world. Since then, … END_OF_DOCUMENT_TOKEN_TO_BE_REPLACED