From Romulus and Remus to the impressively mono-browed Gallagher brothers, sibling rivalry has been well documented throughout history, proving to be a source of amusement for onlooking parties, be it citizens of fledgling Rome or fans of a now defunct Britpop group.

It usually transpires that it’s the similarities between brothers or sisters that generate their discontent and are their eventual undoing and on the face of it the Mercedes models we have for comparison here are two peas in a pod. 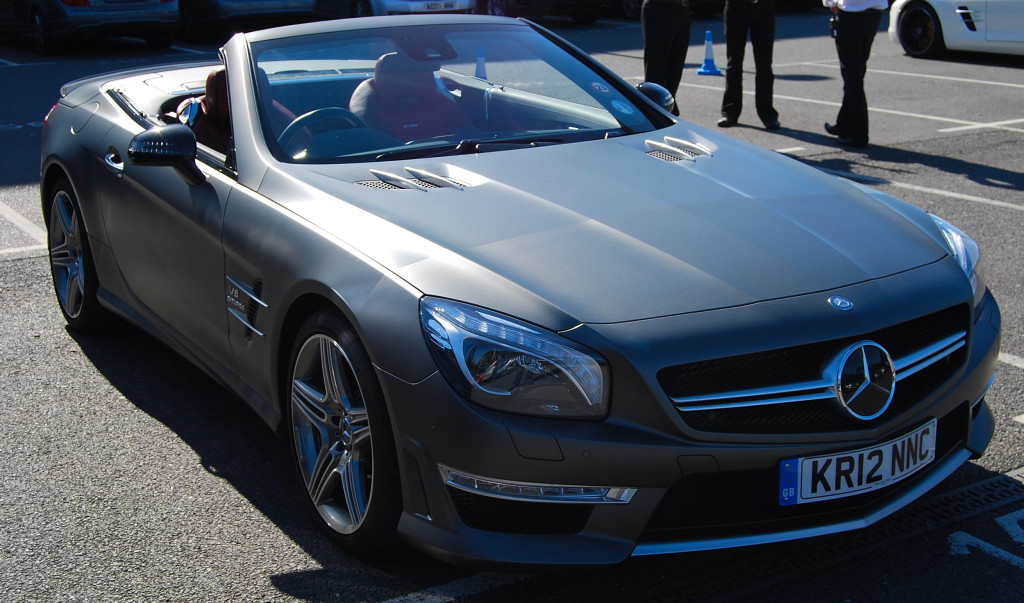 Visually, both sport the classic Mercedes silhouette of an impossibly long bonnet with the two-seat driver’s cabin positioned somewhere just in front of the rear wheels.

Technically, both models conceal a large capacity, V8 engine under aforementioned long bonnet, providing drive to the rear wheels only via a 7 speed automatic ‘box.

Nominally there’s hardly anything to differentiate the two. Both bear the moniker of Mercedes‘ own tuning division – AMG, both have the numbers 6 an 3 smattered liberally about their person and the letters SL are proudly attached to both cars’ boot lids. 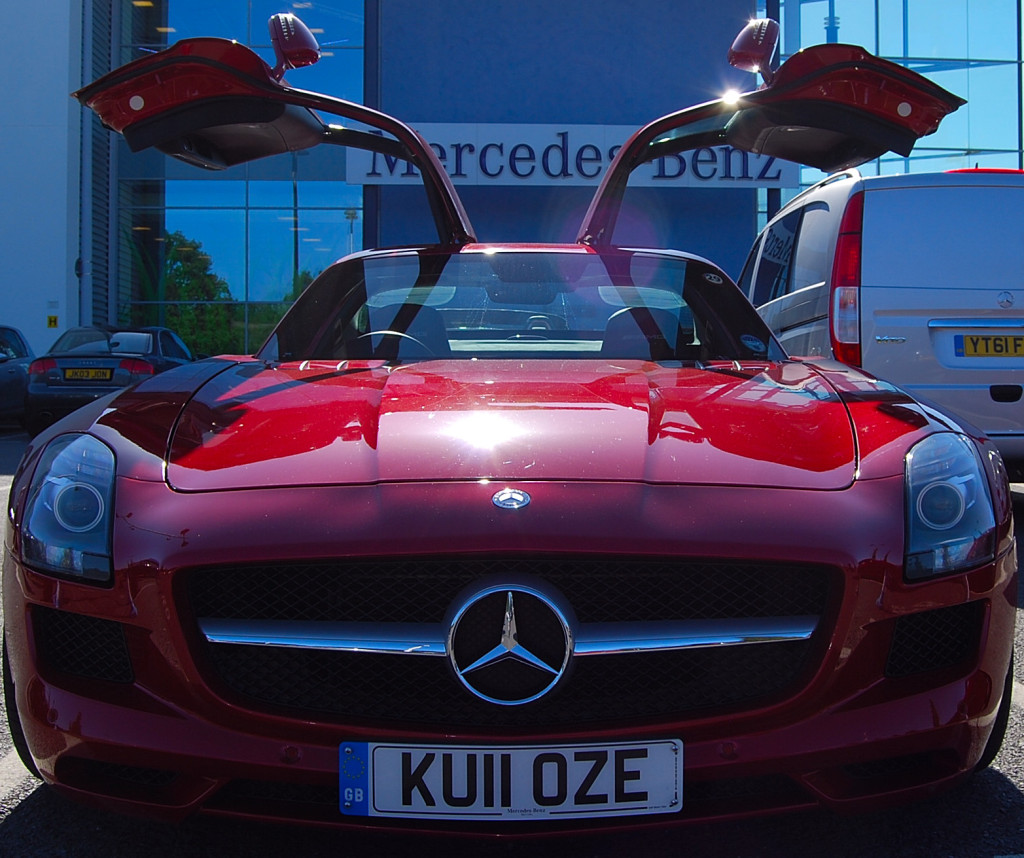 Now, I know what you’re thinking; the one with extravagant gull-wing doors doesn’t just have one S on its rump, there’s a second one positioned immediately after the L; SLS.

I’d be inclined to suggest that never before in the history of vocabulary has one solitary ‘S’ provided such a monumental difference between the meaning of two words. One is defined as a relatively everyday sports car, the other conjures images of a spitting, burbling supercar with styling cues dating back to what is often cited as one of the most beautiful, well, anythings ever made; the (confusingly titled) Mercedes 300SL from the ’50s

The price is one aspect that provides a subtle difference between these two car; £110k for the SL vs £168k for the Mercedes SLS AMG. Bearing this in mind, I was recently tasked with driving these Bavarian bullets, back to back with the sole intention of eking out just what that extra £58k gets you. I know, it’s a hard job but someone’s got to do it.

I think it’s probably best to clear up one important difference here and that’s the rather confusing nomenclature applied to both cars. The SL’s full title is the SL 63 AMG Roadster, the other being called an SLS AMG. Contrary to Mercedes’ previous system of naming cars, the 63 part bears no relation to the engine capacity of the SL as it’s powered by a 5.5l Bi-turbo lump. Just to flummox further, the SLS has the numbers ‘6.3’ attached to its flanks. This is a really naughty trick as under the bonnet it has a 6.2l V8!

Both of these cars may proudly wear the AMG badge but this is where another important difference occurs. The SLS is the first car ever designed and built with AMG at the helm, guiding things in their own particular direction. The SL was first conceived by Mercedes and then handed over to AMG to inject their brand of spice into the equation. This fact isn’t over-publicised by Mercedes, personally I wonder whether it should be in order to achieve a clearer division between the two cars.

So, with those aspects hopefully cleared up, we’ll move onto the important bit; how these cars make you feel and crucially, how they drive.

Even with its high sills to accommodate those signature doors, the SLS is surprisingly easy to get into and those sills immediately add to the all-important cosseted sensation provided by cars that sit so low to the ground. One tip worth remembering here is to shut the door BEFORE applying seat belt and getting comfortable. Unless you’re blessed with extra long arms, you’ll just have to reverse the process to reach up and grab the open ‘wing’. The impression of quality and craftsmanship is immediately evident in the SLS’ cabin but this is no more than we’d expect from Mercedes so no great shocks there. 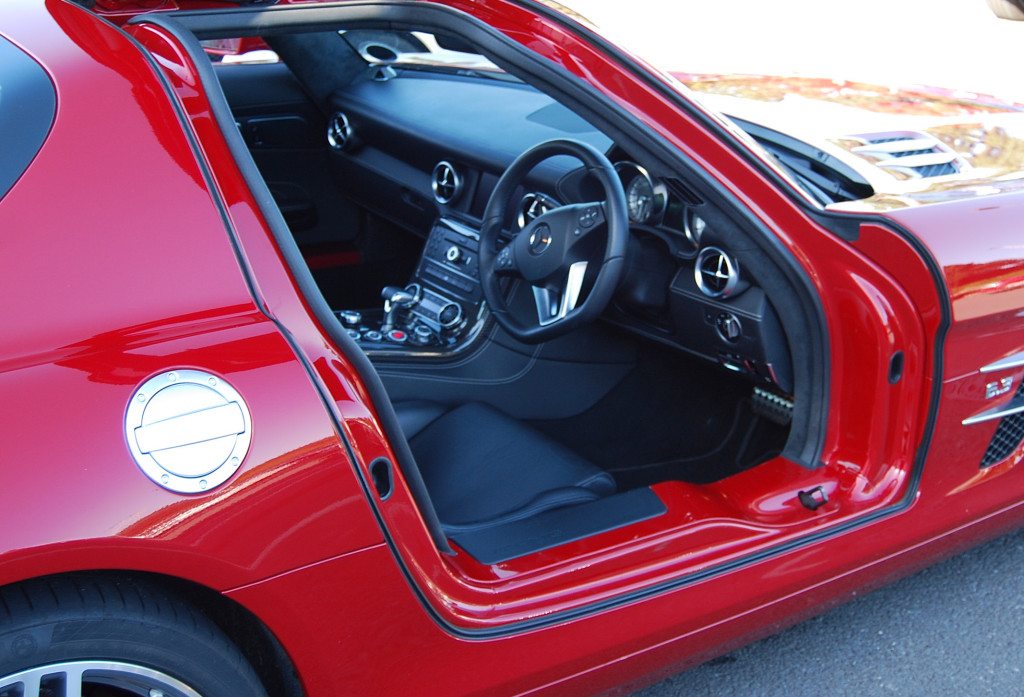 The beautifully crafted interior of the SLS AMG

Features such as the aircraft inspired air vents are still a thing of beauty. The overall impressiveness of the cabin that wowed people upon its launch may have been watered down a little now though as many design features have been filtered down to other models including the SLK and the SL AMG we have on test here.

There’s really very little to choose between the living space of both cars here; both are beautifully crafted, pleasant places to be that would ease even the longest of journeys, both share a well thought out infotainment system that’s clear and requires little training to gain familiarity. There are very subtle aspects of the SLS’ cabin that perhaps give it the edge over the SL, not least of which being the hugely entertaining, F1 style ‘change up’ lights that come to life when the gearbox is in manual mode. Apart from this though, I’m not sure there’s enough here to justify that £58k price hike.

On the road, both are surprisingly livable. I found that it takes very little time to gain confidence in navigating those long bonnets around, even when driven through a busy town centre complete with rubbish trucks collecting their wares and Chelsea tractors being woefully parallel parked; show them no fear and they’ll both willingly respond. It has to be said that the SL was marginally easier to pilot than the SLS due to increased visibility but when compared to its outside competition (Ferrari, Lamborghini etc), the SLS is a relatively narrow and user-friendly. It may be worth noting here that whilst negotiating this busy town centre, complete with bustling cafe culture, the SL grabbed just as much attention as the SLS. If it’s crowd-stopping attention you lust after, the SLS  might not be quite extravagant enough.

Away from the refuse collectors and abandoned 4×4’s that populate urban areas, I head into the country to allow these cars to show off their true accolades – speed and handling. On paper, there seems to be a world of difference in performance; the SL gets to 60mph in 4.3s whereas the SLS is a full half-second quicker at 3.8s. This is a lifetime in the world of fast cars and bragging rights but in reality, both feel brutal when accelerating from standstill. That’s not to say the quicker acceleration isn’t noticeable in the SLS- because it is, but the SL is still more than capable of providing that grin-factor when the mood takes you.

There are buttons and dials to adjust both damper and gearbox setting on both cars and this is where the two cars differ hugely. The dial which alters the ‘box on both cars has four pre-determined driving modes; C – ‘Controlled Efficiency, S – ‘Sport’, S+ – ‘Sport Plus’ and M- ‘Manual’ – each mode altering throttle response and gearing to suit the individual’s needs. The dials themselves are identical but the effect that turning them provides is significant. The clearest way of describing this difference is this; the ‘softest’ setting (C) on the SLS felt roughly equivalent to the most extreme mode on the SL (S+), leaving the heady heights of the SLS’ S and S+ modes simply unattainable in the SL. The story was the same when adjusting the damper settings with the SLS starting off at roughly the SL’s hardest set up.

This could be looked at as a double-edged sword, however as the SLS inevitably struggled to achieve the comfort and easy-driving nature of the SL which we all sometimes strive for when cruising home and not trying to break Nurburgring records. One admirable aspect of the SL’s drive is the complete absence of the dreaded turbo-lag. Clever use of technology has resulted in an engine that revs and responds almost identically to a naturally aspirated one – no mean feat but a very welcome one.

The SL and the SLS are both aurally magnificent. That deep, V8 rumble of the SLS at standstill breaks into an all-out rock concert, headlined by an F1 car tribute act – it really is that good. The bi-turbos of the SL inevitably muffle the sensation somewhat but it’s still there, it’s just turned up to 9 on the SL, as opposed to the SLS which is cranked all the way round to 11. This, of course, may be no accident as Mercedes will want every aspect of the SLS to stand ever-so-slightly apart from their other models, even the sound produced.

This brings me onto an elephant that’s been standing quietly in the corner of the room. It’s no secret that the 6.2l n/a engine in the SLS has its days well and truly numbered. I was amongst the first to don my blackest of mourning suits upon hearing this news as it is a truly monumental engine, even if you just listen to it go down the road. This, of course, means that, assuming production of the SLS will continue, it’s going to need a new, more economical power plant – one that involves lower capacity and that utilises turbos to make up the difference.

There is already available the twin-turbo 6.0l engine found in ’65’ labelled Mercedes, but this is a V12 so whether it can be made to fit into the SLS’ engine bay remains to be seen. It also doesn’t offer much improvement in terms of economy and emissions over the existing 6.2l lump which begs the question ‘what’s the point?’ All this leads to the conclusion that Mercedes may end up substituting the SLS’ engine for the 5.5l V8 found in this SL. They’d probably beef it up a bit but that £58k price hike would seem quite hard to justify.

To sum up; comparing these models simply because they share similar looks and badges is a fairly fruitless task. Yes, their joint genealogy is evident but, as it stands, there are more than enough differences to allow these two siblings to co-exist in beautiful, agreeable harmony.

I'm Ben Harrington and I'm a car lover, freelance motoring journalist and family-man (I'll let you decide the order!) I started Driving Torque in 2010 to share my love of all things motoring with the wider world. Since then, … END_OF_DOCUMENT_TOKEN_TO_BE_REPLACED