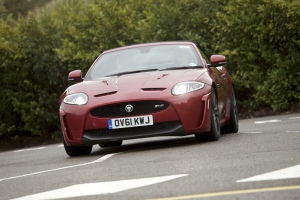 121mm, or 4.73 inches in old money if you prefer. That was the average rainfall in Britain for April 2012, nearly double the expected monthly amount.  The more mathematically minded amongst you will have already calculated that this equates to 4.033mm per day, doesn’t sound like much does it? I can assure you that this insignificant sounding amount felt like a monsoon as it pounded on my windscreen whilst I was wending my merry way southwards on the M6, cursing my luck and fervently glancing skywards, searching for that small shaft of light that might result in some slightly less inclement weather.

The reason for my unrealistic optimism was that on this particular day, I was being given the opportunity to road-test the all new Jaguar XKR-S Convertible, better still; I would be able to perform a back-to-back test with its fixed roof sibling to gain a true insight into what differences exist between the two. 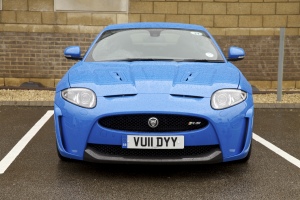 Having driven the XKR-S hardtop previously, I deemed it only fair that I give the convertible the first chance to deliver that ‘wow’ factor that rarely fails to be administered when driving cars of this nature and it didn’t disappoint. Aside the obvious lack of a metal roof on one model, the interiors are identical. A blend of traditional high grade leather, huge swathes of carbon fibre and some tastefully designed ultra-modern switchgear  are the order of the day on both cars but the convertible has the privilege of encouraging a large grin to appear across my face first. There are many neat little touches in the cabin that are comprehensively overshadowed by these car’s performance but someone, somewhere will have put a lot of time, energy and money into them so they shouldn’t be overlooked. Not least of these features is the ‘stop/start’ button that senses when the key is nearby and emits an eerie, blood red glow to the rhythm of a heartbeat. What better way to cross the divide between an inanimate lump of machinery and a living, breathing creature than to actually give it a pulse?  Interestingly, the XKR-S differs from much of the Jaguar range by persisting with traditional mechanical dials, I assume that this is either a weight saving measure or a way of reinforcing the very nature of the model, function over form.

Having depressed the irresistible start button, the 5.0 litre, supercharged V8 awakens with a somewhat startled yelp that settles into a deep, mellow thrum. Audibility is a large part of the attraction of a performance car for me and although the XKR-S convertible isn’t exactly quiet, I’m almost disappointed that the high quality fabric roof does such an impressive job of keeping noise intrusion to a minimum. In fact, the majority of engine noise is not entering the cabin from roof level, it seems to be coming from below, giving the definite impression that the active exhaust system is routed through the base of the driver’s seat, not an approach that I’d be averse to if I’m honest. 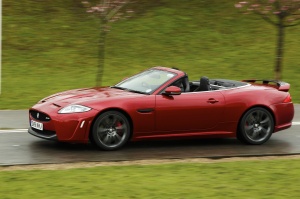 Time to get reacquainted with what 550bhp and 501lb ft torque feels like and as I tentatively pull out onto a drenched B road, it all comes rushing back, literally. Even left in ‘relatively sane’ mode, the acceleration is brutal with a claimed 0-60mph time of 4.2s, all being driven by the rear wheels as they competently scrabble for grip on a very unhelpful surface. The 6 speed ‘box is so subtle between gears that when coupled with such oodles of torque, it’s really anyone’s guess what gear you’re actually in but when corners are approaching as quickly as they do in this car, you have very little time to ponder such issues.

Just as I’m giving up all hope of ever getting the roof down, I have a ‘hallelujah’ moment and the rain
eases as I approach a convenient layby. The Jaguar takes 16 seconds to rid itself of its roof but unfortunately, this is a long time in British weather and by the time we’re topless, an annoying drizzle has commenced. I ponder for a while just how much of the £103,000 list price would be obliterated if the leather interior got a little soggy and then decide to throw caution to the wind and go for it. That £6000 price hike over the hard top is instantly forgotten as the engine note escalates into a satisfying bellow with nothing to mute the noise between exhaust and eardrum; it isn’t too long before that pleasure is taken away though. It obviously doesn’t take much time to reach 50mph in this car and as I accelerate on past it, my aural joy is replaced by a very normal buffeting wind noise. Even with the wind deflector deployed, it’s a strain to hear the exhaust and the whole experience becomes paradoxical: More speed = Less pleasure!

As the drizzle intensifies, the sensible side of me takes over and I spot another location up the road to weatherproof the Jag. As the speed decreases and the gearbox follows suit, something magical happens that could easily justify the extra premium of the convertible on its own. In complete contrast to the XK range’s somewhat gentlemanly image, the clever exhaust pops and spits pockets of fuel, resulting in a hugely satisfying cacophony, reminiscent of an old-school American V8. This noise should definitely not be muted by a roof.

In full sport mode, coupled with dynamic settings on and manual gear-changes selected, this car initially feels as fast and direct as anything I’ve driven, including its hard top sibling. It’s only after a few minutes that I wonder whether it’s just my imagination or has something been lost in the translation from fixed-head to drop-head? On such a precise piece of machinery it’s hard to detect any slightly rounded edges at all but thankfully I’m in the coupe next to draw a true comparison. 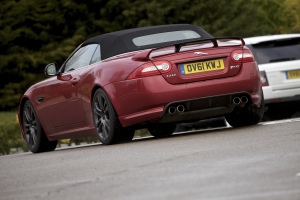 Jaguar XKR-S Convertible – roof back up!

According to the facts and figures, this XKR-S coupe that I now find myself in should present exactly the same driving feel as the convertible I’ve just exited. They somehow both weigh the same and, according to Jaguar, the performance doesn’t alter even a smidgen from one car to the other. The way a car actually feels bears little relation to its facts and figures however so the only answer is to get hands on in the coupe.

That glorious V8 howl is still very noticeable with a solid roof, whether this is done on purpose or is simply a by-product of removing sound deadening in order to lose weight, I don’t know. Either way, it encapsulates the cabin and unlike the convertible, it shows no signs of abating at higher speeds due to wind noise.

Out on the open roads the XKR-S coupe initially feels absolutely identical to the convertible which truly is testament to the engineers at Jaguar as they battle with the laws of physics to eliminate the flex that naturally occurs when a car loses its roof. It’s only when the coupe’s settings are turned up to the max that physics begins to win. The car is so beautifully balanced and just seems to respond immediately and exactly to the driver’s every whim, inspiring previously unknown confidence as you  point that long bonnet in the direction you want to travel and the rest of the car follows – very, very quickly. It’s barely noticeable at first but after a few quick corners, it becomes more apparent that this car was designed from day one with a roof in mind and unfortunately, some changes in weight distribution must occur if this vital piece of bodywork is dispensed with.
It’s obviously no slouch but when faced with this competition, the convertible’s miniscule flaws become apparent. But let’s be straight here, when I say miniscule, that’s exactly what I mean. Unless you actually owned both cars and planned on driving them back to back, the experience of driving the convertible would satisfy even the most enthusiastic of drivers, day in, day out, come rain or shine.

I'm Ben Harrington and I'm a car lover, freelance motoring journalist and family-man (I'll let you decide the order!) I started Driving Torque in 2010 to share my love of all things motoring with the wider world. Since then, … END_OF_DOCUMENT_TOKEN_TO_BE_REPLACED