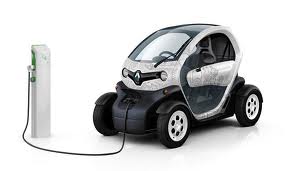 The Renault Twizy – A wise move or a clever gimmick?

Earlier this year, Renault released upon the world what they hoped would be the start of a revolution in transport – the Twizy. Officially classed as a Quadricycle and powered solely by lithium-ion batteries, it’s a pocket eco-warrior with distinctive, space-age looks and a tandem layout that would struggle to gain anonymity on any road it graced. Not seen one on the road yet? Me neither. Come to think of it, I’ve not met anyone who’s seen one, nor have I met anyone who’s friend’s seen one and I think I may know why.

The conundrum with the Twizy in my opinion is just who Renault expect to buy one? When they collated the results from the inevitably extensive market research they commissioned, just how large was the pot of people who couldn’t possibly be happy without a Twizy in their lives? 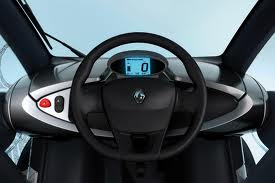 The view from a Twizy driver’s seat – fairly conventional really

The first and perhaps most obvious target audience are small car drivers who’s trips are invariably localised and who want these journeys to be as cheap as possible. With prices starting at just £6,690 for the base ‘Urban’ spec, it’s certainly cheap enough and has the added advantage of being exempt from VED due to being a zero emissions vehicle.  Parking doesn’t get much simpler and the transition from driving a car to a quadricycle is negligible due to the Twizy sporting a proper steering wheel and the switch- gear from a Clio. Doors don’t come as standard but for just £545.00 they can be added. Unfortunately though, they’re half-doors with no windows and therefore offer slightly less protection from the elements than a Sunday newspaper and this is where the whole idea falls down. Even the cheapest cars on sale today do a fairly impressive job of keeping their occupants dry and warm which, in this country at least, is one of the huge benefits of owning a car. Being forced to don deep-sea fishing apparel for every cloudy/chilly journey might just put some drivers off. 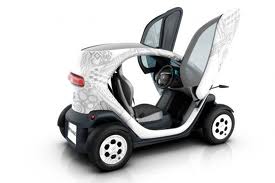 Are Renault looking to tempt riders off their motorcycles?; They’ve already got wet-weather gear and aren’t afraid to use it. Somehow I can’t see this plan working either though, no Ducati rider could possibly get his fix of adrenaline in a vehicle with 17hp and a top speed of 50mph. The advantage that bikes possess in stationary traffic would also be nullified as the Twizy is too wide to weave between cars.

Scooter riders could possibly be swayed but that zero road tax is only £16 cheaper than a 125cc and, oh yes, I may have forgotten to mention that when you buy a Twizy, it’s compulsory to also adopt a battery; this privilege will cost you £45 a month. Coupled with the fact that a Twizy can’t be stored in your average garden shed as many scooters are and all of a sudden it’s not a viable swap.

On a more positive note, the Twizy handles fantastically on its skinny rubber and the instant torque available from the 6kwH battery makes for an entertaining experience. Just don’t be tempted to have too much fun though; the 60 mile range is drastically reduced by spirited driving and although 881lb is light, one wouldn’t want to push it home and the alternative is to find an accessible plug socket and wait for the 3.5hr recharging cycle to complete.

Charging a Twizy is another conundrum I can’t quite fathom; if it’s left on the street attached to a domestic extension lead trailing from your front door, it’s surely only a matter of time before someone trips over the wire and sues you for negligence. If you’ve got a garage you can charge it in then you can probably afford a proper car with four seats that won’t contribute towards a bout of pneumonia. As long as you live or work in a major city centre, you’ll be able to top-up your Twizy at dedicated charge points. This is assuming that the optional anti-lift alarm you paid £170 for has sufficiently deterred any thieves from walking away with it.

So, is the Twizy a glimpse of the future and I need to move with the times? Possibly, but right here, right now this little electrical oddity seems to generate more questions than it answers.

I'm Ben Harrington and I'm a car lover, freelance motoring journalist and family-man (I'll let you decide the order!) I started Driving Torque in 2010 to share my love of all things motoring with the wider world. Since then, … END_OF_DOCUMENT_TOKEN_TO_BE_REPLACED