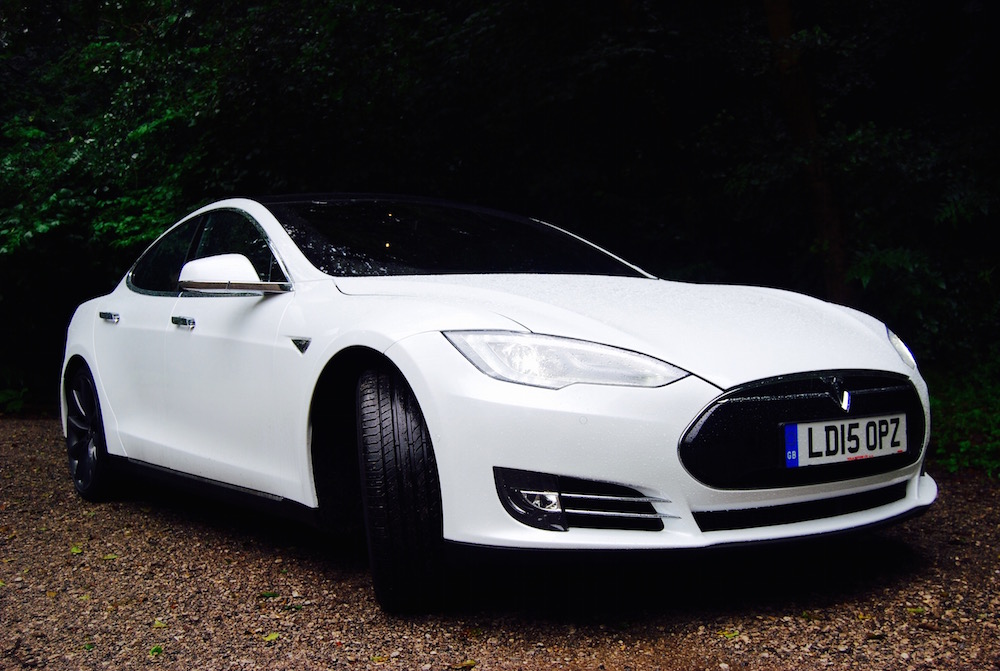 Petrol-head, piston-head, gear-head; all noggin based monikers used to describe people with more than a passing fervour for automobiles and their associated paraphernalia. I’m usually proud to place myself in whatever the collective noun is for this genre of people – we’ll call them a clutch – as cars and everything about them really stir my loins.

So, what happens when the petrol, pistons and even the gears are removed from the equation, as with this Tesla Model S? Can it possibly hope to light the same proverbial fire without the aid of a single spark? 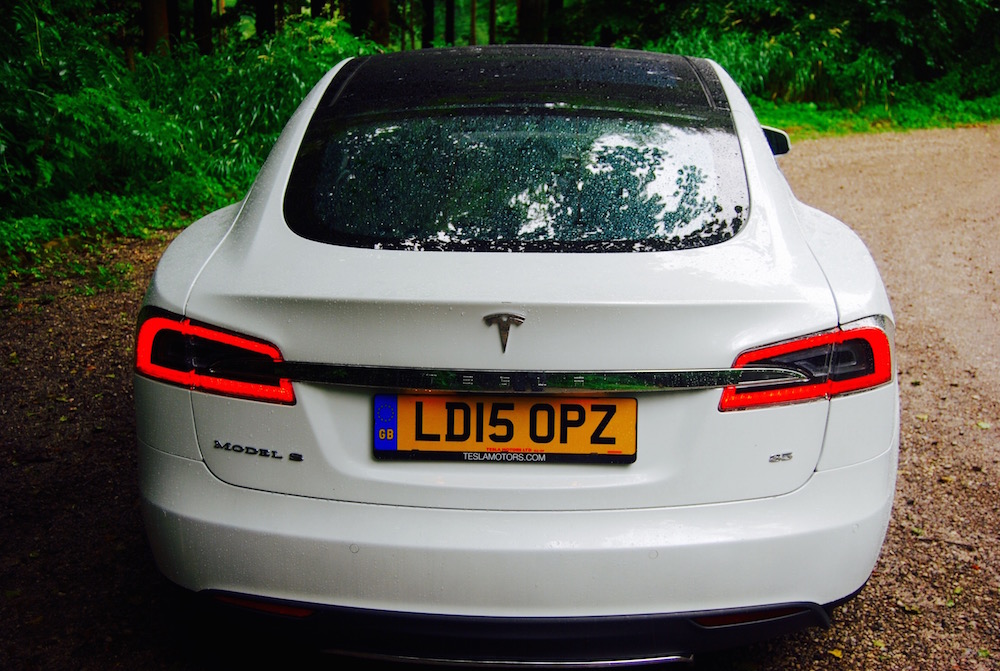 Well, let’s start with how it looks, before we get onto the way it moves. This is a large car, and I mean large – 4970mm long and with a 2960mm wheelbase means it’s a matter of centimetres shy of Jaguar‘s flagship XJ, and it beats the XJ in terms of width – 2187mm vs 2105mm. And yet, through the clever use of proportion and shape, it somehow doesn’t seem to take up that much space.

Everyone who sees the Tesla Model S seems to have an opinion on it, most of them comparing its appearance to a Maserati from the front and a Jaguar from the rear. I can definitely see what everyone means; there are certain shades of Ghibli and XF about the Tesla Model S. Bearing in mind that this is the first car Tesla have designed from the ground up (Lotus’ design influence on Tesla’s Roadster meant it was basically an electric Elise), it doesn’t come across as a ham-fisted first attempt.

Looking at it from the side, it’s sleek and sexy with ultra-slippery lines that don’t appear capable of resisting one bit of wind. In contrast, the rear is more muscular and aggressive with a pair of very un-saloon car haunches that house the rear wheels. I can’t help but feel that the Model S is let down buy its own face, though, which is somewhat cross-eyed when viewed head-on. Also, I know that it doesn’t need a big, gaping front grille – in fact it’d decrease its efficiency – but whenever any car has its ‘mouth’ blanked off with plastic, it just seems to make it look a bit….well……vacant.

Inside the Model S the design brief was undoubtedly ‘minimalist’. There’s a digital dashboard in the same mould as Audi’s system, a central screen that makes even Apple’s new monster iPad Pro look a mite wee, and that’s about it – not a knob or dial to be found. All of this gives a real feeling of space and airiness, which is lovely, but I increasingly found myself wanting a tad more storage space than a relatively small glovebox and a couple of cup holders. The ribbed central luggage area between the front seats  just seems to exist to show off the lack of transmission tunnel and is a bit useless; I believe an optional storage box can be purchased and I definitely would – the Model S may have two boots, but there’s not even a door-bin to be found inside.

Tesla claim to have used premium materials to kit out the Model S’ cabin whilst being as environmentally responsible as possible. There also seems to have been weight-saving put into the equation, though, as certain aspects feel a bit flimsy and unsubstantial to touch. 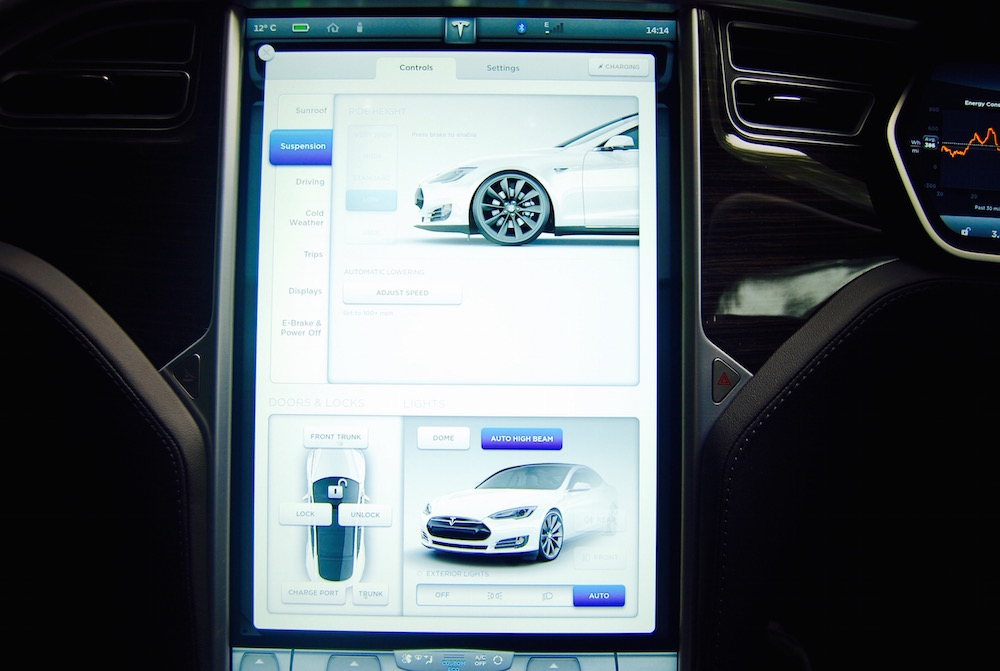 So, that’s the ‘show’ dealt with, but what about the all-important ‘go’? This is the 85kWh model with one motor driving the rear wheels; that translates to around 380bhp and 440Nm torque, 0-60 in 5.4s and 140mph top speed. All these numbers are only half the story, though, as the differences between driving the electric Model S and a conventional fossil fuel burner are chasmic. There’s no gears to change, no lag or delay of any kind and no real power bands to contend with; put your foot down and it’s just a steady, linear, eerily silent build up of speed which somehow loses some of its meaning thanks to the sheer lack of effort involved.

Take your foot of the accelerator and the way speed suddenly drops off is pretty dramatic, too; thanks to regenerative technology, it’s not really possible to ‘coast’ as such, and it’s so effective that the Model S’ brake lights activate to warn other road users you’re slowing down pretty quickly. 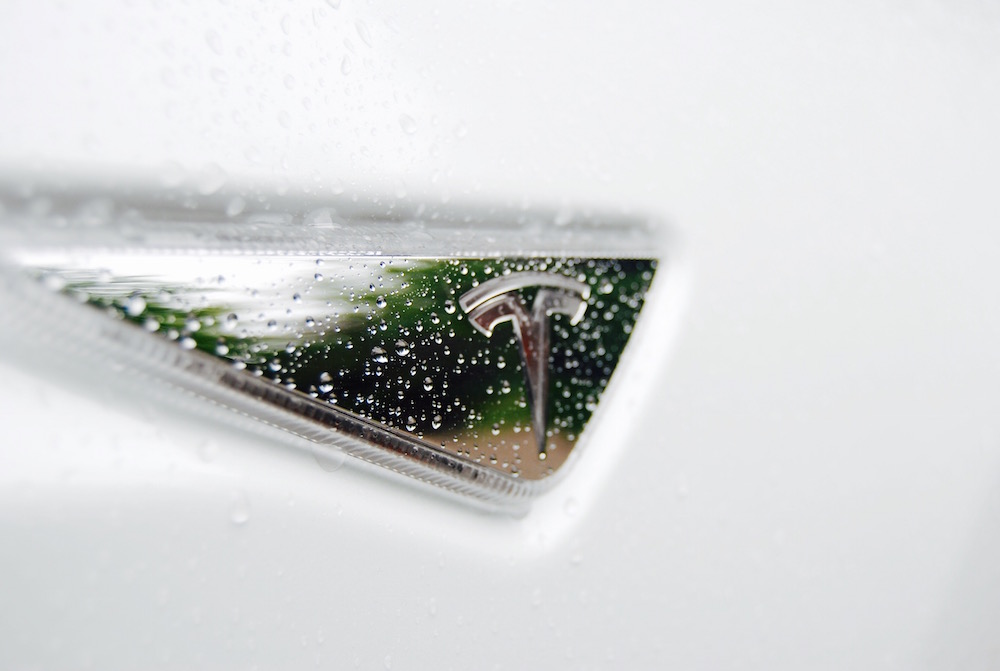 Thanks to an incredibly low centre of gravity, the Model S handles like no car of this size and weight (2108Kg) has any right to. It’s so easy to throw around and changes direction with the minimum of fuss, although this rear-driven derivative’s front end did tend to lighten at speed (Tesla claim perfect 50:50 weight distribution with their AWD models). What’s also surprising is just how comfortable and serene the Model S felt over bumps and loose surfaces, especially considering the optional 21” wheels our test car was shod with. This may be thanks to the ‘Smart’ air suspension it was riding on, but as that’s a £2,100 option, I’d be wary of parting with an extra £3,800(!) for the larger alloys and stick with the free-of-charge 19” wheels it comes with.

If optional extras are your thing, though, I can certainly recommend Tesla’s Ultra High Fidelity Sound system. Normally, the sweet sound of an internal combustion engine is more my thing, but as that’s not an option here, opting for one of the clearest in-car-entertainment systems I’ve ever experienced seems to make sense. Again, it’s not cheap (£2,100), but if music’s your thing, you’ll not regret it, especially if, like me you’re amused every time you turn it all the way up to 11 – surely a nod to Spinal Tap and an indication that Tesla have a sense of humour. 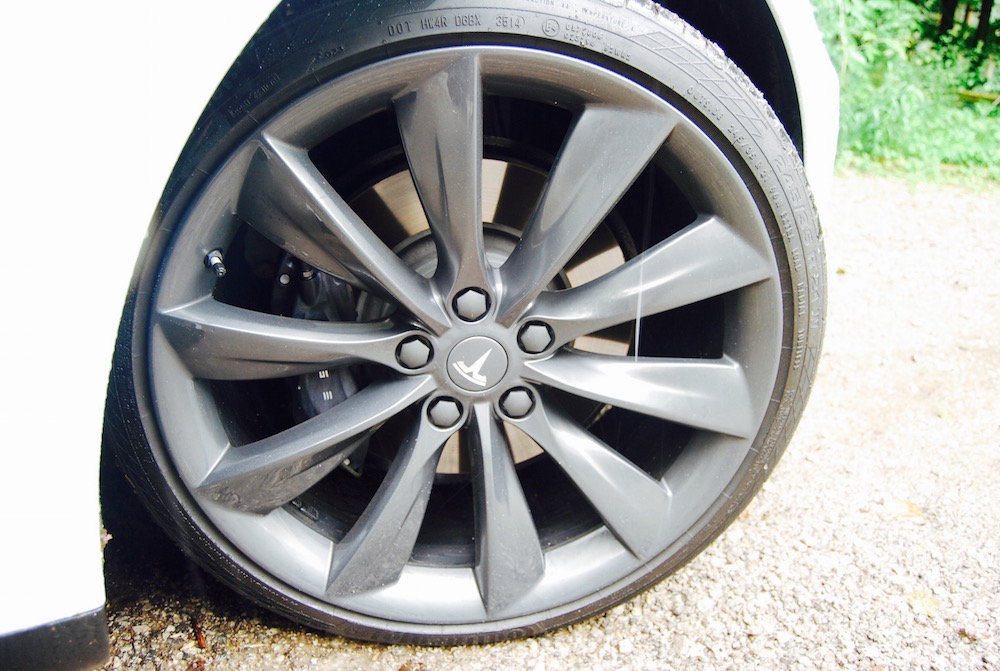 Britain may be somewhat behind the times in terms of infrastructure when it comes down to electric cars, but we’re getting better. Look to the likes of America and there’s fast charging points in many car parks – they’re even offering a battery swap service that’s quicker than filling a conventional tank of fuel. Where they’re heavily subsidised in Norway, the Model S has been the #1 selling car, twice! 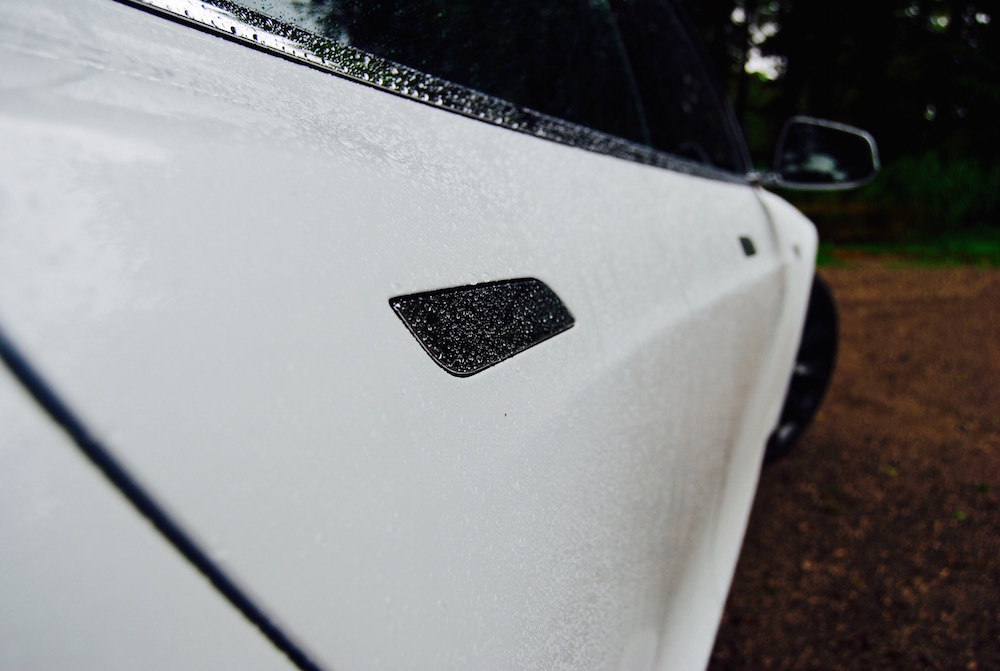 More charging points are being installed in Blighty all the time, though, and if you buy a Model S, Tesla will fit a fast charger at your home. There will always be initial range anxiety with electric cars but it’s reassuring that the Model S’ GPS system highlights chargers around you or on your route and calculates if your remaining charge will get you there. You can opt to minimise battery use from air con etc, but I’d personally save that for either very long distance driving or when power’s getting low – anything less than comfortable in a £60K+ car just doesn’t sit well with me. 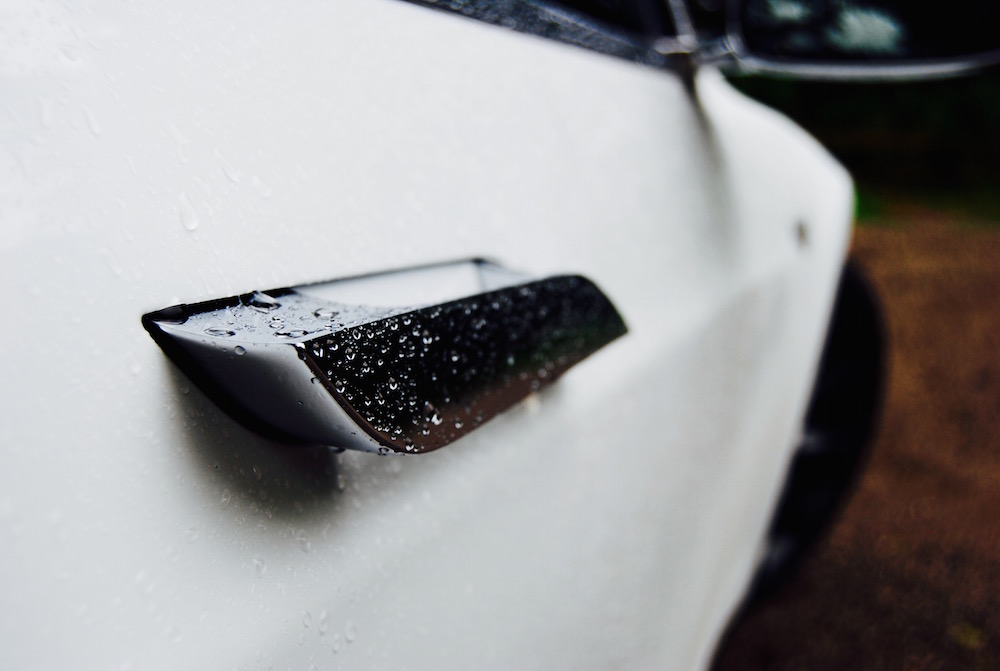 Anyone concerned about residual values? – Tesla will guarantee 50% buy-back after three years. Yes, it’s a different experience to a petrol engine mated to a conventional ‘box, and I know which one I prefer, but in terms of emissions, running costs and sheer speed, the Model S makes a lot of sense.

For full details, go to; www.teslamotors.com

I'm Ben Harrington and I'm a car lover, freelance motoring journalist and family-man (I'll let you decide the order!) I started Driving Torque in 2010 to share my love of all things motoring with the wider world. Since then, … END_OF_DOCUMENT_TOKEN_TO_BE_REPLACED