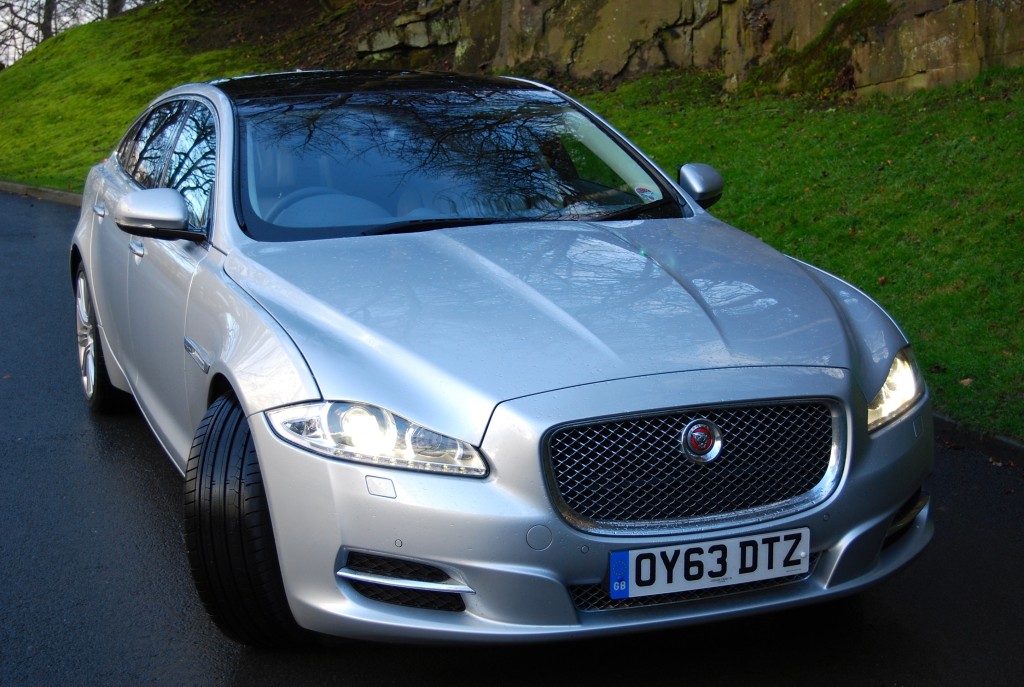 It’s hard to believe, but this face has been around since 2009 when it became the most original XJ…….ever.

For over forty years since their launch in 1968, Jaguar XJs as a breed (that’s XJ-plural, by the way, not the long defunct XJS) were instantly recognisable, no matter how many model updates and refreshments it went through. Its twin headlights were a consistent theme and its lower, more purposeful stance stood it apart from other cars in the class, subtly suggesting that although it may be perfectly capable of wafting dignitaries and heads of state around in its rear seats, the most pressing objective in the drafting rooms of Coventry was to continue Jaguar’s tradition of making the seat with the steering wheel the place to be. 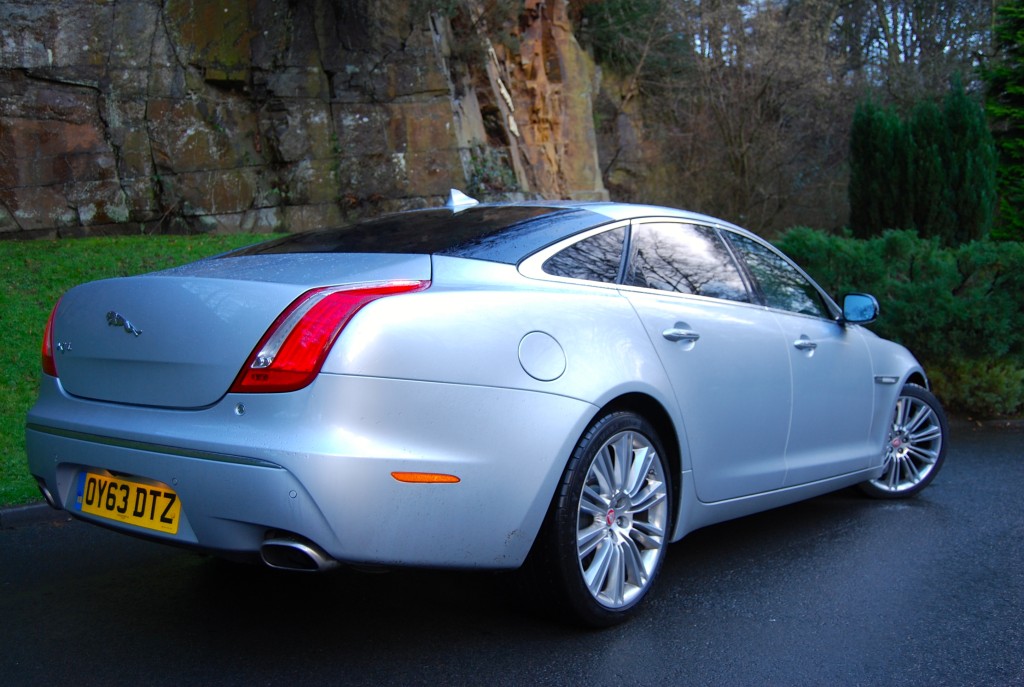 XJ L is 125mm longer than standard XJ. Doesn’t sound a lot, does it?

Believe it or not, the XJ guise we have on test here has graced our roads since 2009 and possibly best personifies the direction Jaguar has been taken since Tata took the reins of this potentially ailing brand in 2008. Visually, it’s unrecognisable next to any XJ of the past; undoubtedly a brave move that could have deterred as many long-standing customers as the new ones it attracted. Without sounding over-dramatic, imagine the Porsche 911 disowning that silhouette; you get the picture.

This test car isn’t just an XJ though, this is a Jaguar XJ L. It doesn’t take 20:20 vision to work out that the ‘L’ stands for ‘long wheelbase‘, but in all honesty, it could just as easily stand for ‘luxury‘, ‘limousine‘ or even ‘how the ‘l are you going to park that thing?!‘. The standard XJ isn’t exactly small, but by extending the wheelbase 125mm, this ‘L’ version enables occupants in the front and the rear to potentially be sat in different postcodes. Or time zones.

But what’s it like to drive? I couldn’t possibly have gotten through a Jaguar review without mentioning the old ‘grace, space and pace’ motto that the brand have admirably stuck to for decades, but is it really relevant in a luxo-barge such as this? 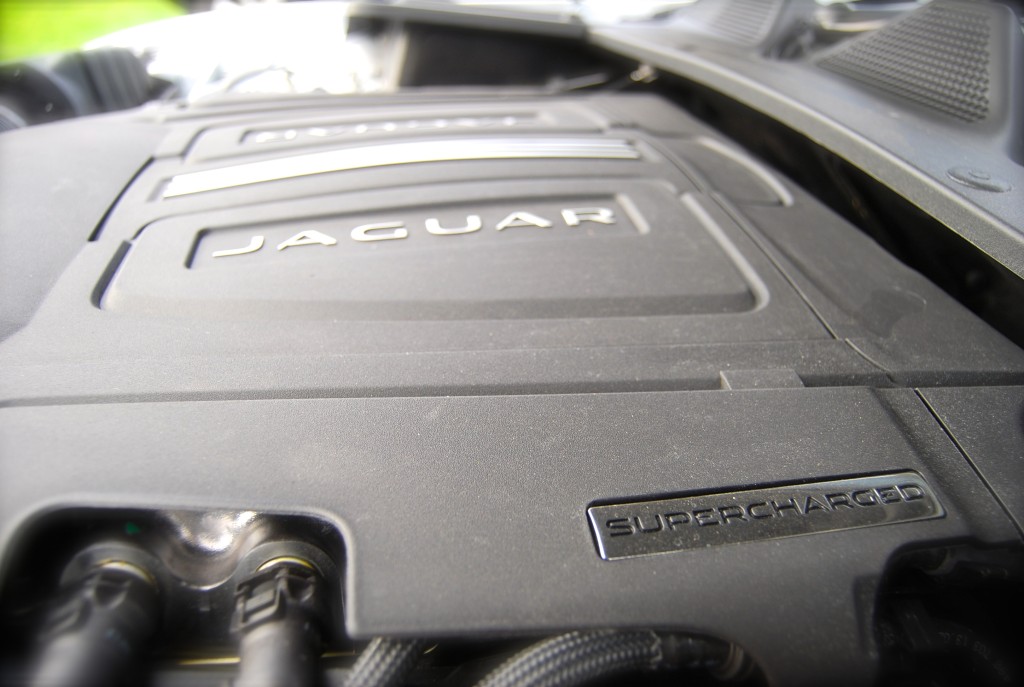 Jaguar and Supercharged – a lovely combination

Well, under the bonnet is as good place to start as any and this particular model kicks off proceedings with an engine emblazoned with a word that’s guaranteed to set the pulse racing  – ‘supercharged’. You can opt for your Jaguar XJ L to come complete with an oil-burning unit, and very fine it is too, but if driver-satisfaction is your priority, you need look no further than this 340bhp, 3.0 V6, most recently utilised with devastating effect in the F-Type. Anybody thinking there’s a couple of cylinders missing from this engine would be right – Jaguar took the decision to reserve the V8 for their Supersport and XJR models last year, in an effort to gain a touch more respectability on the eco-front. Replacing it with this V6 may have reduced bhp by almost a whole Fiesta ST, but with a 0-60 time of 5.7s, and top speed limited to 155mph, I defy most people to notice the real-world difference in performance or refinement, thanks in no small amount to the silky-smooth 8-speed ‘box, sourced from ZF. 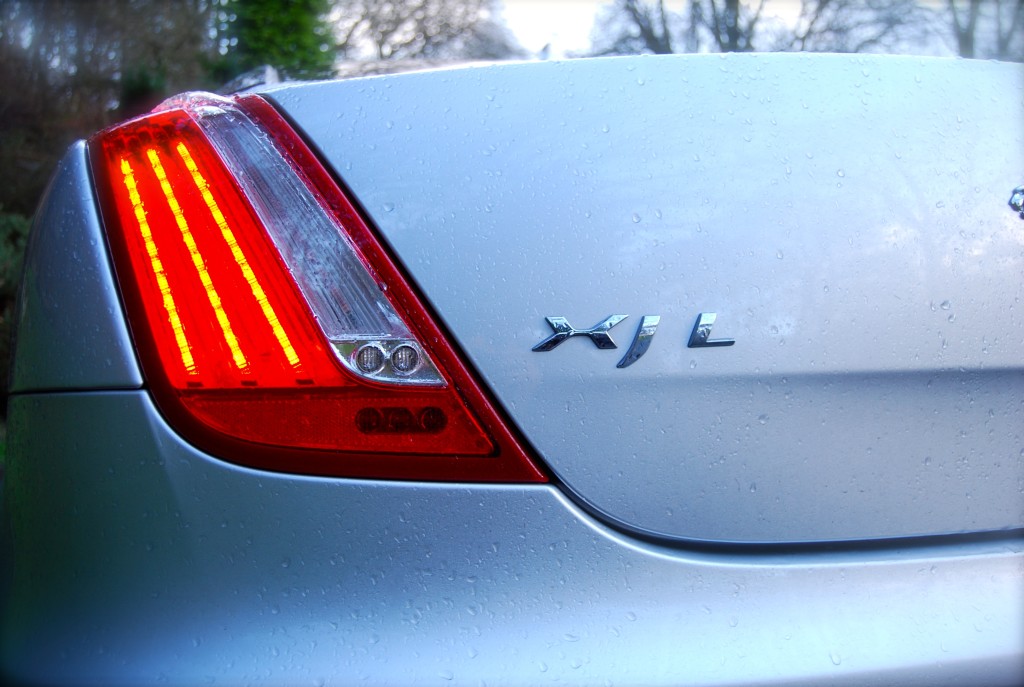 So, on the ‘grace and space’ front, it’s quite good. Recent improvements to suspension and dampers seem to have ironed out a few imperfections in the XJ L’s ride and so they should – being jolted and jarred whilst trying to deal with fellow world-leaders just won’t do. One thing I would recommend any owner or chauffeur do is to de-activate the ‘Eco’ button for every journey; I know it’s not the politically correct thing to say, but the stop-start on this Jaguar XJ L is far too intrusive and completely ruins the whole ambience of the thing. It was obviously fitted for reasons relating to emissions which can’t be ignored, but unless your inner eco-warrior just won’t allow it, do yourself a favour and turn it off.

But what about ‘pace’? – not usually a word associated with something weighing over 2.3 tonnes that doesn’t benefit from jet-propulsion and wings. Well, plonk yourself down into the hot-seat and any initial intimidation is softened by the relatively diminutive, thin-rimmed steering-wheel; stare out over the bonnet and there’s a power bulge, right down the middle that isn’t entirely obvious from the outside – all of a sudden, you get a sneaking suspicion that this car wants to undertake a little less wafting and a bit more galloping. 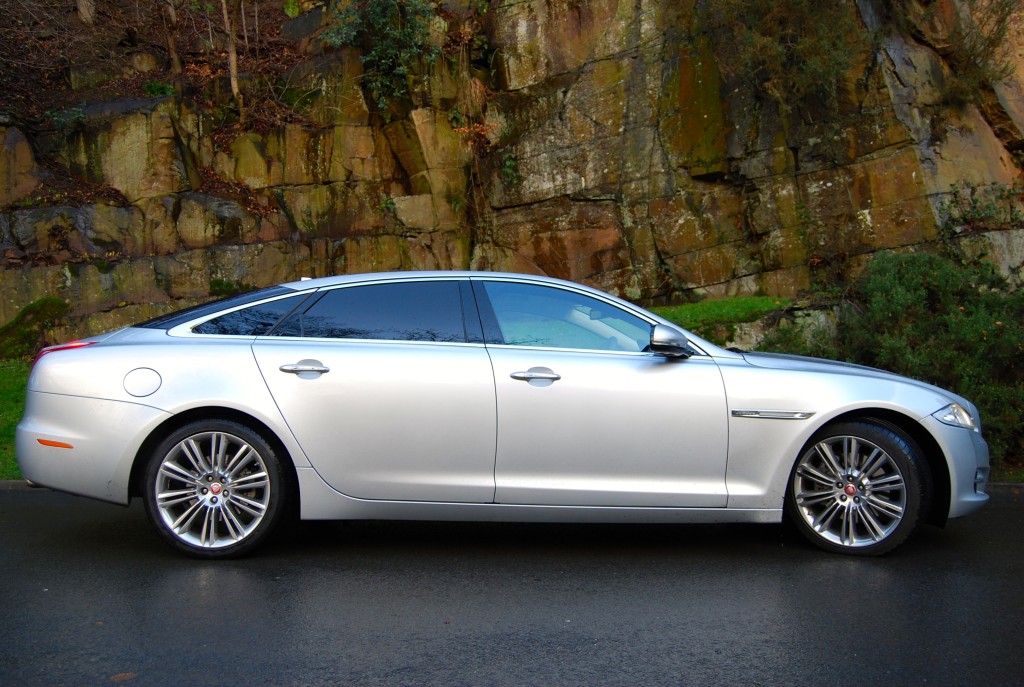 You know a car’s big when 20” polished wheels look proportional.

Had Jaguar opted to go down the turbo-charged forced-induction route, as they inevitably did with the Diesel unit, they could potentially have pushed their economy stats into a different bracket, maybe even into the realms of righteousness. But that would have incurred the penalty of the dreaded lag and in a car of this class, that’s not acceptable. The supercharger on this V6 may be running constantly by its very nature but that means constant, smooth power delivery right across the rev range. Acceleration in this XJ from zero to about forty is barely discernible; there’s no real sensation of increasing speed, the only clue is the objects passing by the side windows more frequently. Get past forty though, and things get a touch more dramatic, no rasping exhaust note of course – that’s the F-Type’s job, but accidentally give an overly enthusiastic twitch of your right-big-toe, and your driver’s licence could quite easily be placed on the endangered species list.

There’s a couple of subtle adjustments present in many models across the JLR range – the Sport mode (S) on the gear selector and the very tempting chequered flag button (Dynamic mode). If I’m honest, I found them to be a tad out-of-place on this stretched XJ L and I still think a slightly more appropriate illustration could be used, maybe a pair of leather driving gloves or perhaps a miniature portrait of Sir Stirling Moss? Either way, select both options and the effects are dramatic. Visually, one immediately notices the display changing to a blood-red hue; aurally, the 8-speed ‘box clings more determinedly onto each ratio, as you’d expect in any sport mode, and on a tactile level, this massive, sumptuous limousine becomes a little more rigid, more conducive to being thrown around. Size and mass are obviously one’s enemy when negotiating bendy tarmac and these adjustments are designed to assist in overcoming what the Jaguar XJ L undeniably has in spades. 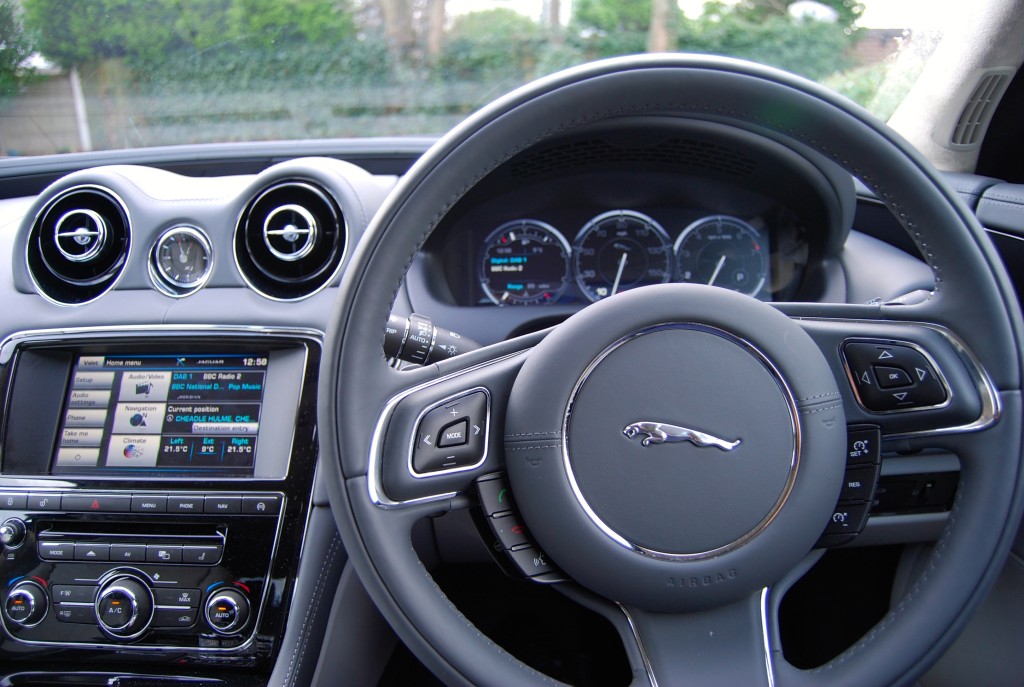 I’m not going to say that with a press of a button and a turn of a knob, your Jaguar XJ L will magically transform in to a Mazda MX-5, that would be incredulous. What it does do though, is contract the whole sensation into something akin to an M5 – a car that has no right to cover the ground as promptly as it does. Push on through roundabouts and bends and you’ll find a willingness to kiss apexes that you just don’t expect – get out of the car, take a look back and it seems almost farcical that something built to these dimensions can be manhandled without getting overly scary.

It’s very hard to say things about the XJ’s interior that hasn’t already been said. The blend of materials and imagination employed combine to put any cabin this side of a Rolls-Royce to shame, it really is British craftsmanship at its very best. The grey leather in this particular model certainly wouldn’t be my choice, but find the colour and materials from the extensive catalogue that float your boat and it’s genuinely one of the nicest places you could be in. The acid test is to look at the interior of a Jaguar XJ L and then immediately compare it to the equivalent offerings from BMW, Mercedes or even Audi – Britain 1 – Germany 0. 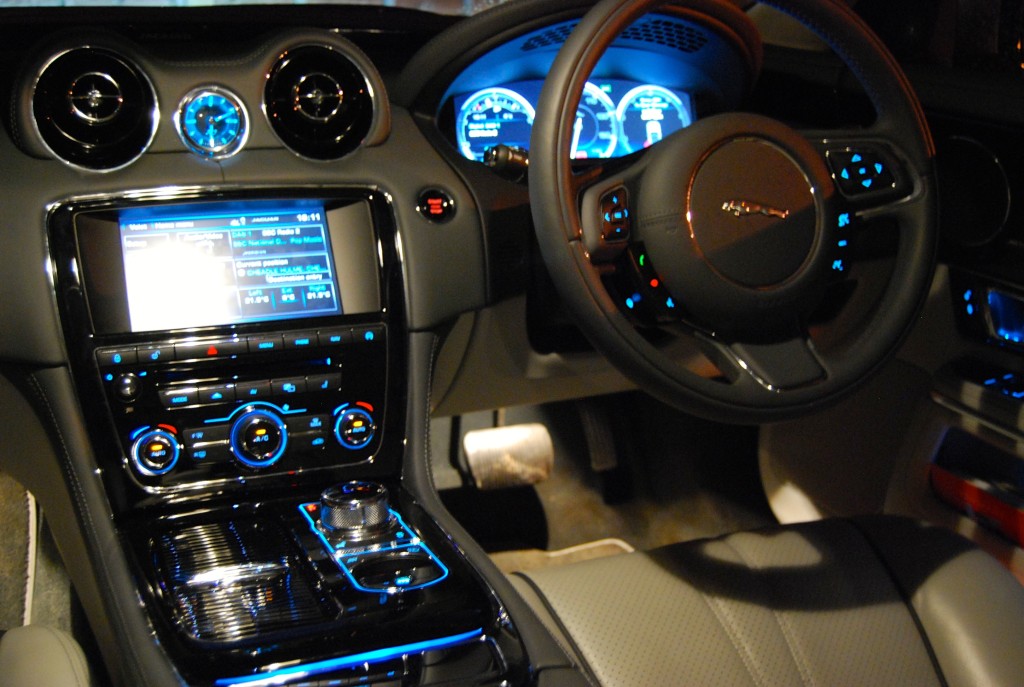 If anything, it looks even better at night with its blue ‘mood’ lighting

That said, there are certain imperfections that need addressing in my opinion, not least the cutting edge digital display. Call me old-fashioned but I find the use of microchips and hi-res screens completely contrary to the rest of the cabin. Put it this way – I don’t remember the likes of Rolex, Tag-Heuer and Panerai ditching their Swiss-made, precision movements in favour of a Casio-style digital LCD. I guess I just prefer looking at a mechanical object that years of craftsmanship and experience have influenced, rather than what basically amounts to lots of clever lights that could just as easily be the screen on my MacBook.

The multimedia system on our test car was the Meridian Reference Audio System in the front, coupled with the Premium Dualview system in the rear – £4000 and £8,490 options respectively. Both work beautifully and really allow all passengers to be entertained individually if so desired, with screen resolutions and sound quality that make a British Airways First Class cabin seem shabby in comparison. It isn’t without its gremlins though: For some reason, if I received an incoming call on my iPhone, instead of going silent and disappearing into the background, the audio system would occasionally select a random track and play it over your conversation – far from ideal when piloting a car is the obvious priority, not violently prodding a touch screen to convince it to work properly. 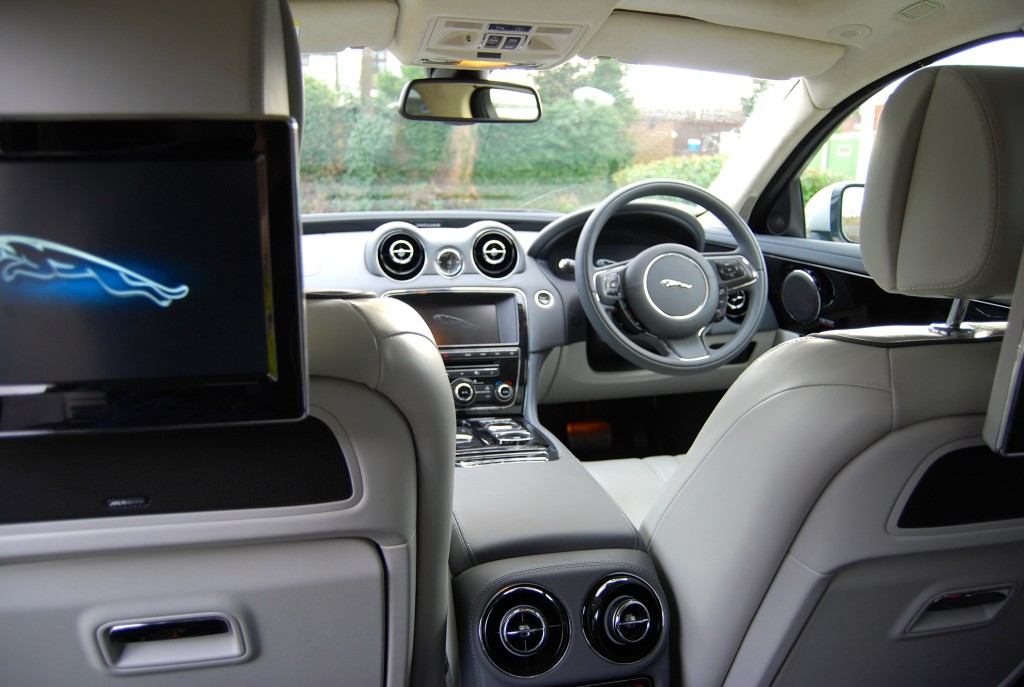 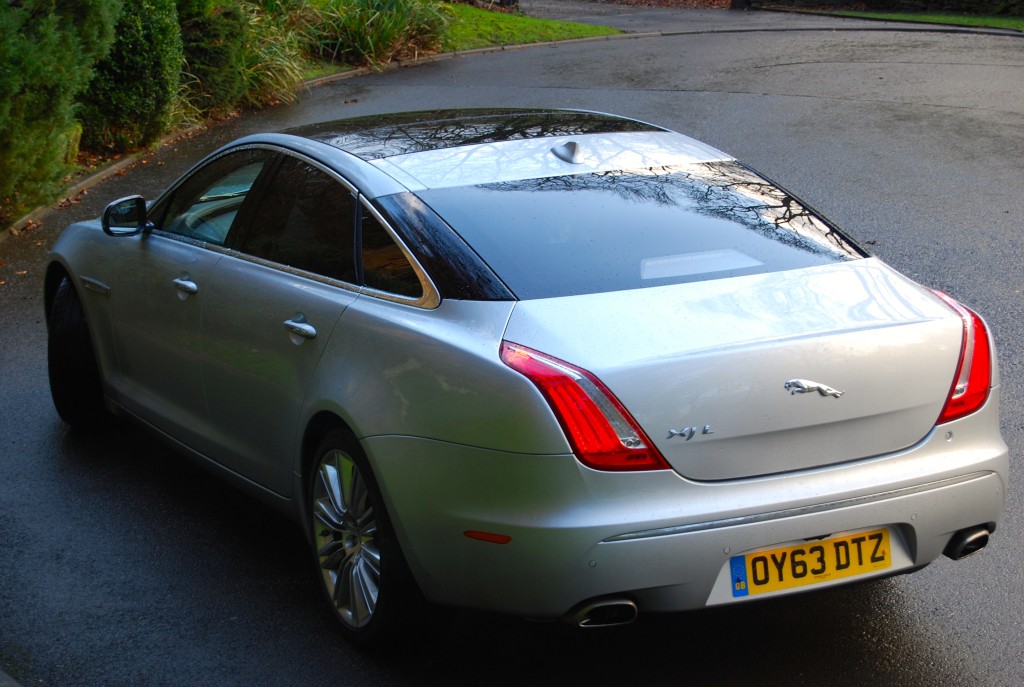 I’ve always admired the look of this Jaguar XJ LWB and the direction JLR have decided to take their flagship model in. What’s equally pleasing and surprising is that even in this elongated version, the driver-focussed emphasis that Jaguar place on their cars hasn’t been completely forsaken in the name of passenger opulence, which is ultimately the primary function of the long wheelbase XJ.

For full details go to www.jaguar.co.uk

I'm Ben Harrington and I'm a car lover, freelance motoring journalist and family-man (I'll let you decide the order!) I started Driving Torque in 2010 to share my love of all things motoring with the wider world. Since then, … END_OF_DOCUMENT_TOKEN_TO_BE_REPLACED