Over the years, the world of music has presented us with many artists collaborating into what have been dubbed ‘supergroups’. This usually involves previously highly respected artists coming together in the hope that the result will be greater than the sum of its parts. With varying success. 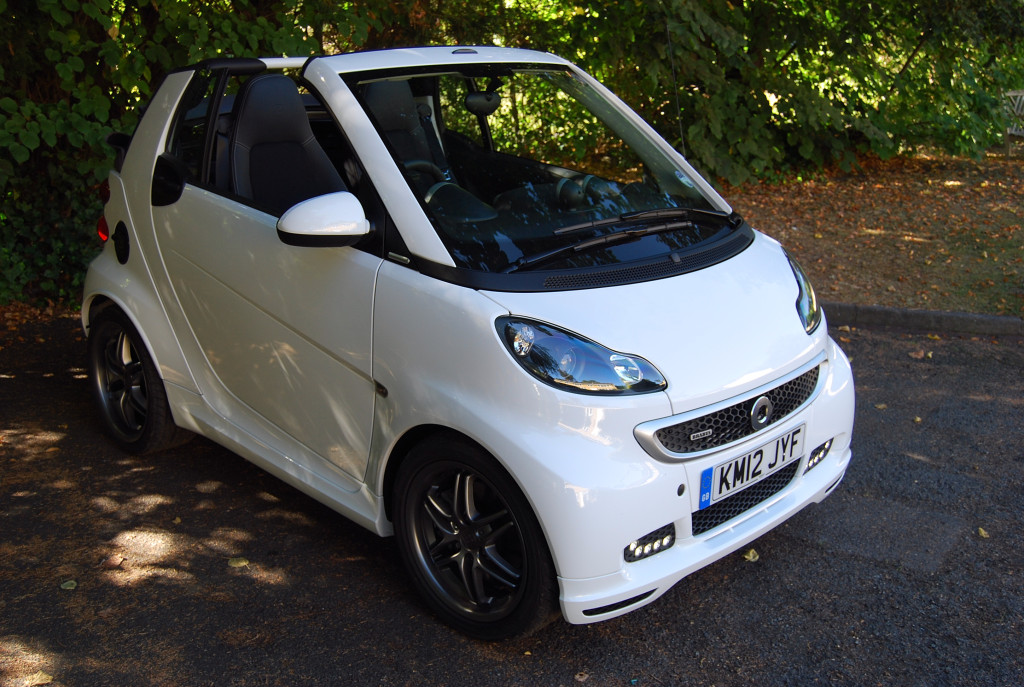 On the face of it, what we have here in the shape of the Smart Fortwo Brabus is the automotive equivalent of a supergroup; We’ve got Mercedes as the all-seeing management company and the glue that keeps the assembly together. The frontman is Smart who were instrumental in the modern city-car phenomenon  and have had the grit and determination to stay credible in a highly competitive market for 14 years. The wild-man of our group is undoubtedly Brabus who have been tuning and modifying Mercedes in somewhat extravagant fashion since the 1990s.

The question is though, do we have here a beautiful combination who compliment each other in perfect harmony? Or have they created a monster that should never have seen the light of day?

First impressions are good; visually, the Brabus additions are pleasing without being too dramatic. The extra skirting at the front and sides adds to the overall sporty feel but doesn’t look out-of-place. This is possibly thanks to the exclusive alloy wheels which measure 16” at the front and 17” at the rear – that might not sound too impressive but when they’re bolted to such a small car, they look quite large enough. 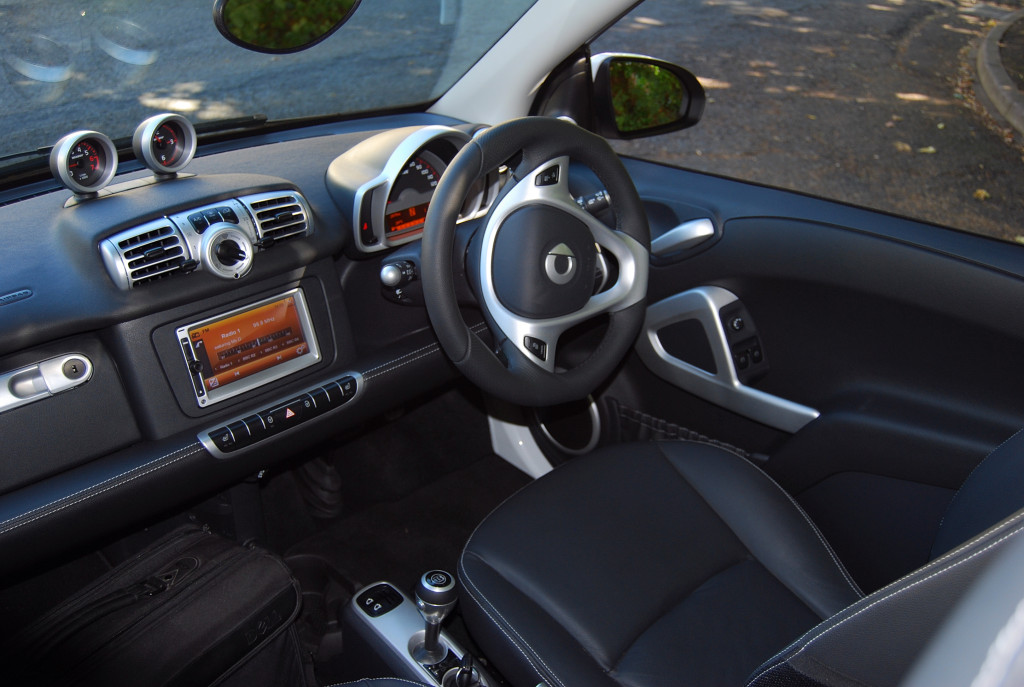 The interior is similarly smattered with various Brabus-only parts including the dashboard, heated leather seats and aluminium levers which proudly sport the Brabus logo. It was never going to achieve the opulence of an S-class or a Maybach but it’s worlds apart from the utilitarian cabins found in lesser Smarts. This little car initially seems like the real deal.

Once on the road however, cracks start appearing in our lineup as the car’s limitations come into view. The dimensions of the car were never going to easily lend themselves to a road-hugging, sports car sensation but thanks to the lack of height adjustment in the seats, I sometimes felt like I was sitting atop a skateboard whilst careering downhill. Surely this one little feature which would have relieved me of the need to duck to see through the window could have been built into the seats? Rear visibility isn’t any better. Once the roof is down – no matter how the rear view mirror is adjusted, the only view it offers is of the sky.  Maybe Smart assume that their target market will all stand well under my 6ft height and won’t encounter this problem, who knows?

The ride in the Brabus is something of a paradox. The 10mm lowered, sports suspension initially feels taught and responsive, appearing to suggest snappy, sharp cornering. The stiff, crashy ride is apparently flattering to deceive however as at the first sign of a corner, the body rolls and wallows and the whole car under-steers horribly. 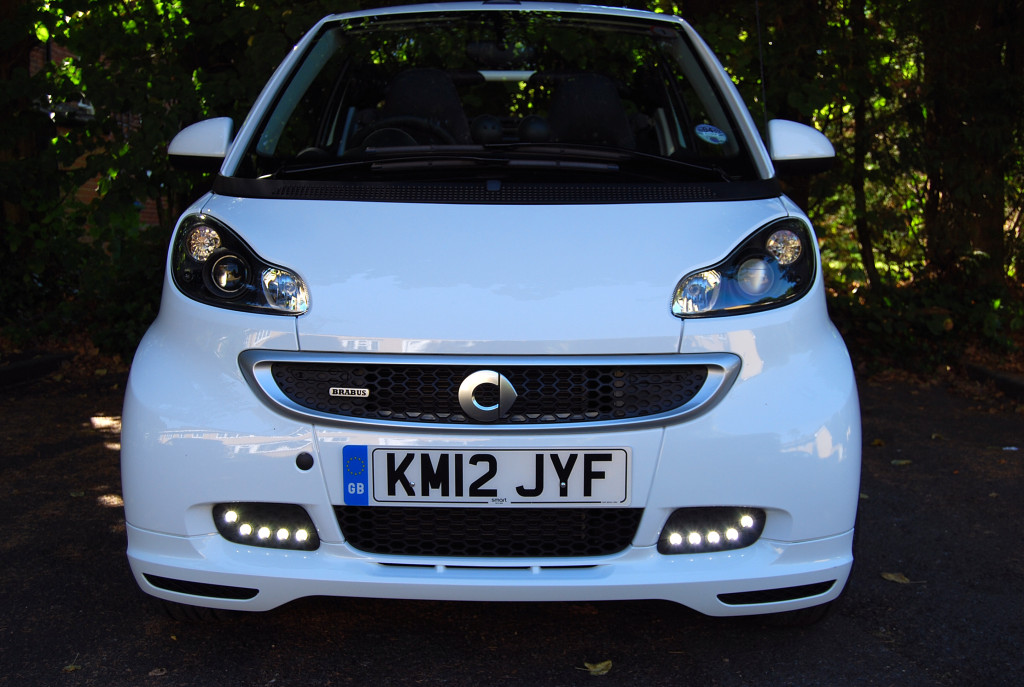 It’s a similar story with how the Smart Brabus sounds. At tick-over, the sports exhaust does an admirable job of squeezing a pleasant tune out of this unlikely 999cc, three-cylinder engine. Depress the throttle, though and the note reverts to a highly unpleasant strangulation which does nothing to encourage spirited, roof-down driving. This is possibly a ploy to prevent overuse of the brake pedal as it sprouts from the floor in the same manner as a 1960’s Volkswagen Beetle and achieves roughly the same result; press a little – nothing, press more – still nothing, press firmly – the car shudders to a standstill. Not really what we’ve come to expect by modern standards.

All of this is overshadowed, however by what can only be described as the worst gearbox in the world. I’d heard reports previously but this was my first hands-on experience and I wasn’t disappointed. I sampled it first in automatic mode and the inherent problem is startlingly obvious. The time this ‘box takes between changes is almost painful. Just when you expect the ratio to have changed and drive to be available, it’s not there at all. I would lean forward, ready to be pressed back into my seat when the propulsion forced me but it takes so long that I could honestly have caressed the steering wheel with my forehead before the ‘box had remembered what to do. The story’s just the same if manual gear changes are attempted, I’d go as far as to say that with this gearbox in the Smart Brabus, I’m surprised they’ve sold a single unit; it’s dreadful.

All of the problems stated above could perhaps be overlooked if the car were a giveaway, a bargain. This is possibly the final nail in our supergroup’s coffin though  – it costs £16,750 before options. This is very similar money to the Mini Cooper Convertible and the range topping Fiat 500C Abarth; both of which feel better to drive, offer seating for four and are arguably more attractive.

In conclusion, combining these three automotive legends has unfortunately created less of a supergroup, more of a one hit wonder.

I'm Ben Harrington and I'm a car lover, freelance motoring journalist and family-man (I'll let you decide the order!) I started Driving Torque in 2010 to share my love of all things motoring with the wider world. Since then, … END_OF_DOCUMENT_TOKEN_TO_BE_REPLACED