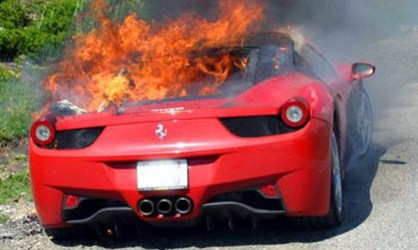 Following several internet reports of Ferrari’s latest model, the 458 Italia being involved in fires, the Modena based firm have released the following official statment -: “The company is currently investigating the particular incidents in which cars have apparently been involved in a vehicle fire, and it is currently treating these as separate incidents.”

Thankfully no people have been killed or injured in these fires but Ferrari’s acknowledgement of the problem surely indicates that they are worried.

The 458 has been received with critical acclaim and is widely regarded as Ferrari’s greatest achievement for a long time. Let’s hope the bubble isn’t about to burst (into a ball of flames) as it would be a shame for this magnificent car to be tarnished by such a potentially dangerous problem.

I'm Ben Harrington and I'm a car lover, freelance motoring journalist and family-man (I'll let you decide the order!) I started Driving Torque in 2010 to share my love of all things motoring with the wider world. Since then, … END_OF_DOCUMENT_TOKEN_TO_BE_REPLACED