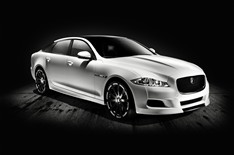 Jaguar has taken the opportunity at Pebble Beach to unveil the Jaguar XJ75 Platinum Concept, a more muscular, aggressive take on the standard XJ.

As is usual for manufacturers, Jaguar are insistent that the super-saloon is merely a design one-off built to mark the firm’s 75th anniversary. As is also usual, this is far more likely to be a taster of where Jaguar intends to go with a production model, probably the Jaguar XJR.

The XJ75 Platinum Concept is powered by a version of the firm’s 5.0 supercharged V8, tuned to produce 464bhp and 424lb ft of torque. Being a flagship for Jaguar, the engine in any final product is likely to exceed the 503bhp currently on offer in Jaguar’s most potent models.

Some neat highlights have been added to the interior, the most striking being the removable pocket watch style clock made exclusively for the car by British watchmaker Bremont.

I'm Ben Harrington and I'm a car lover, freelance motoring journalist and family-man (I'll let you decide the order!) I started Driving Torque in 2010 to share my love of all things motoring with the wider world. Since then, … END_OF_DOCUMENT_TOKEN_TO_BE_REPLACED