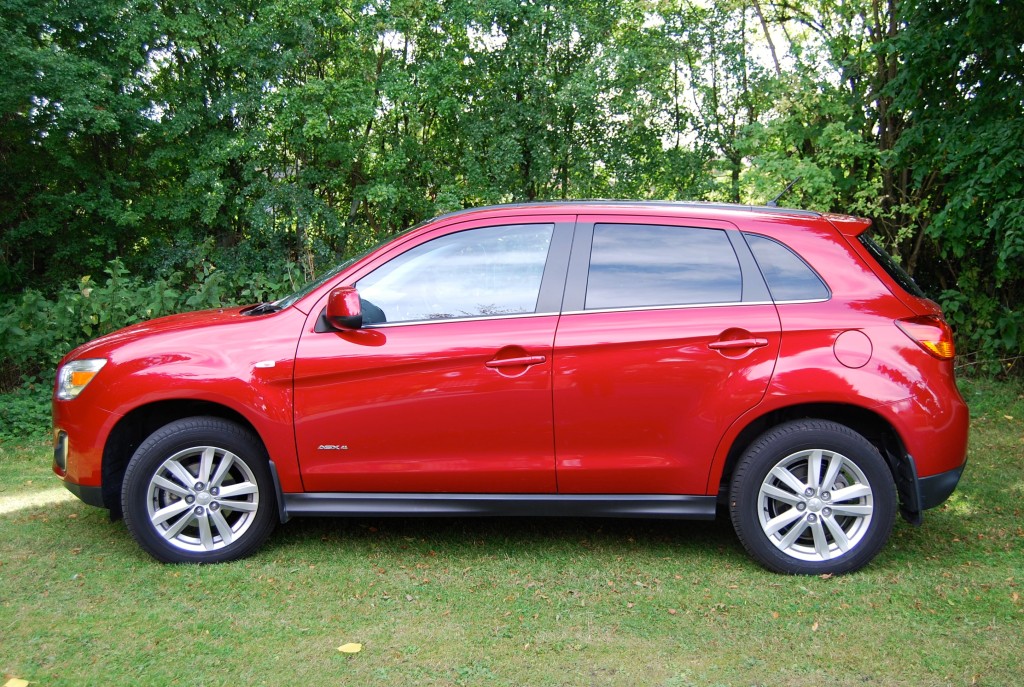 It took me a while to realise where I’d seen the basic shape of the Mitsubishi ASX before, and then the Yen dropped. That prominent nose, disproportionately small rear end and minimal glass-housing aren’t a million miles away from the Range Rover Evoque – high praise indeed, also the Dodge Calibre – high praise……er……not-so-much. I can’t help but like the Mitsubishi ASX’s gaping trapezoidal nose and I’m under no illusion as to why; in a range that offers the likes of the Outlander and the Mirage, the ASX (Active Sports Crossover……..erm – ASC?) is the only ‘car’ in Mitsubishi‘s fleet that bears any resemblance at all to the sadly missed Lancer Evo – a car I always found appealing, even if it was in a brutish kind of way. 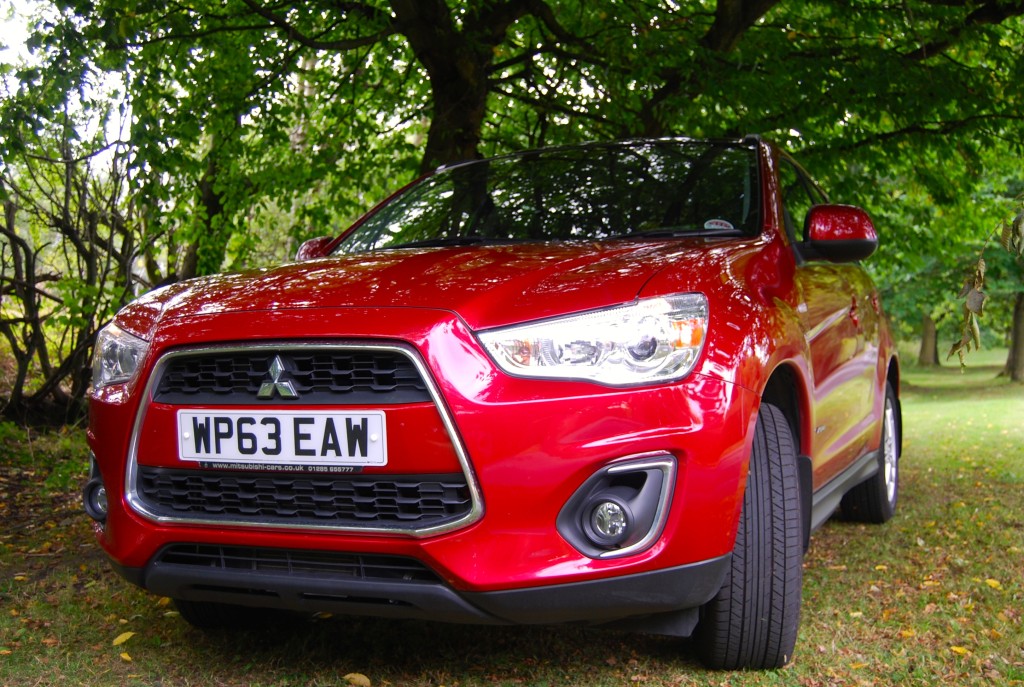 The Mitsubishi ASX  is unashamedly a crossover, competing with the likes of the Qashqai and the Yeti, so it obviously comes complete with the compulsory elevated ride height and chunky wheels, and this only add to its appeal. Keeping glazing to a minimum also does a great job of keeping the whole look of the ASX compact – less like a minibus. It’s only really the rear-end of the Mitsubishi ASX that lets the car down. Look on Mitsubishi’s own website and you’ll not find one picture of the ASX’s rump, and that’s because the car’s designers seem to have run out of either imagination or inclination when they got to this point. I appreciate that the slightly snubbed silhouette is due to Japan’s length based tax system, but they don’t tax pretty cars more than plain ones. It’s a shame really because the competition in this sector is fierce and I’m inclined to think that looks are a major deciding factor for crossover buyers. So to put such effort into 90% of the Mitsubishi ASX and then leave the rear as some kind of afterthought doesn’t do it justice. 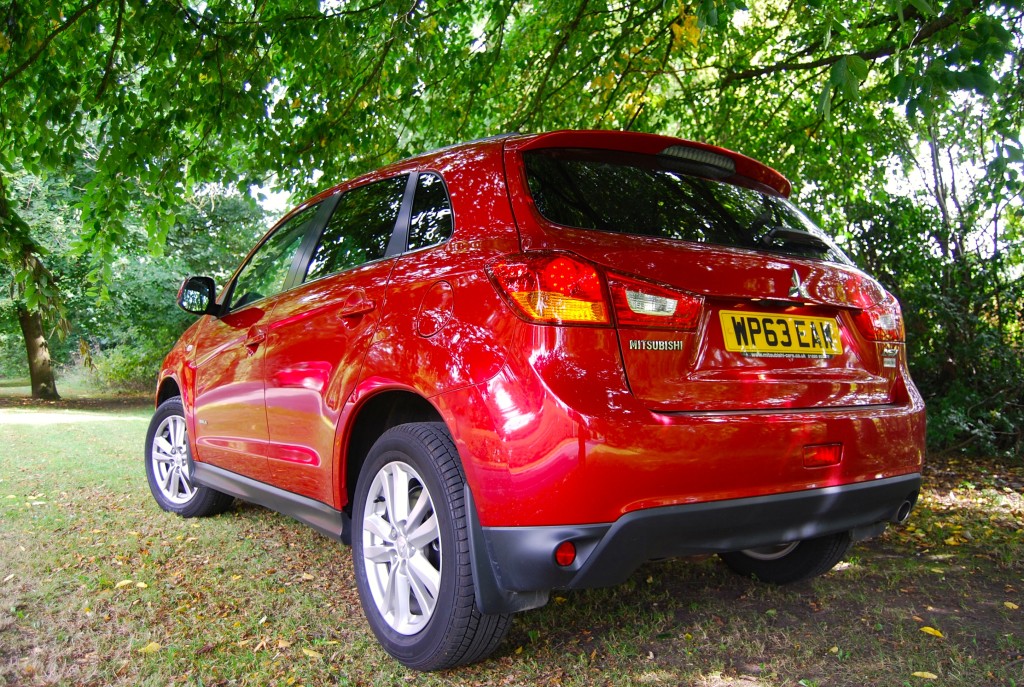 It’s a similar story inside the range-topping ASX 4; there’s many nice touches, with decent materials and some obvious thought put into the design, but they’re sadly let down by certain elements that are as confusing as they are annoying. Buttons and switch gear are haphazard in their placement, drinks are strictly forbidden in one of the cup-holders and the most tactile place in the whole car – the steering wheel, is made of a grade of plastic that develops a palpable tackiness after prolonged contact with human skin; If you’re going to use a pleasant, soft-touch material anywhere, it’s a good idea to start with the steering wheel. The theme continues throughout the Mitsubishi ASX cabin; there’s a fashionable ‘Stop/Start’ button, but this means that you can’t wind down windows or listen to the Kenwood multi-media unit without the engine running, and even with it working, the Kenwood unit stubbornly refused to play music from my iPhone. 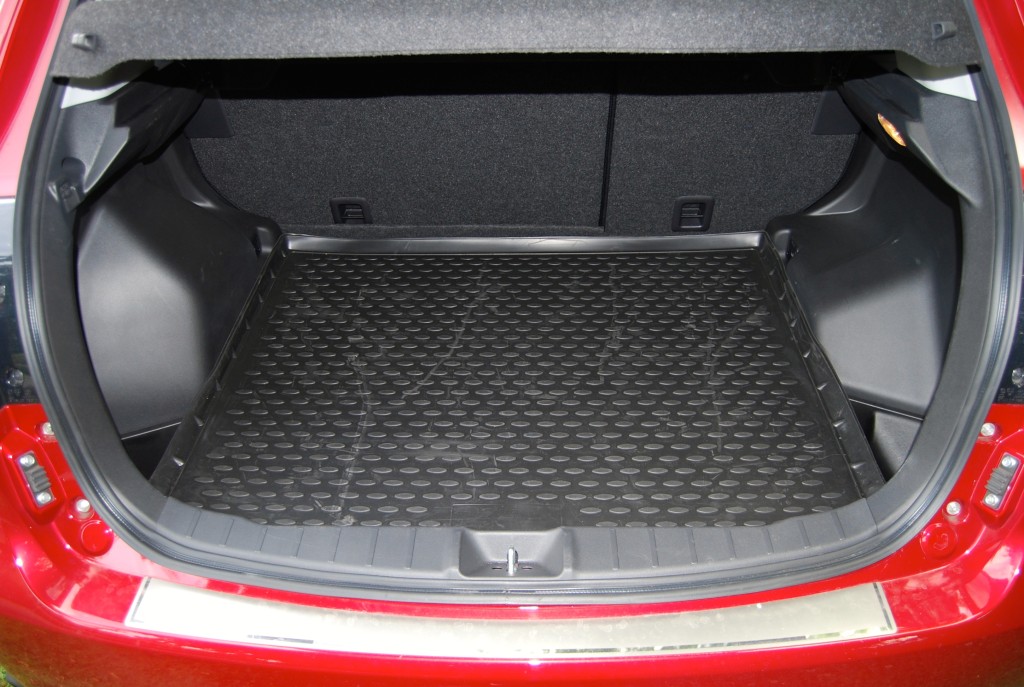 Room inside the Mitsubishi ASX is more generous than you’d warrant, with plenty of space for five proper adults and a boot which I’m sure would suffice for anyone using it for the usual shopping/dog carrying trips. Visibility is excellent, thanks to the relatively short overhangs and lofty driving position, and parking is made even more simple thanks to the reversing camera which comes standard in the ASX 4. Another peculiarity within the whole ASX range though, is the unavailability of front or rear parking sensors which are glaringly absent on the options list. It may not be the most colossal car in the world, but parking any vehicle can only be aided by sensors – it may seem a small issue but it’s a strange omission that could ultimately sway potential buyers towards the opposition as they’ve grown accustomed to what is a commonly available feature these days, and they really don’t want to risk damaging their new pride and joy. 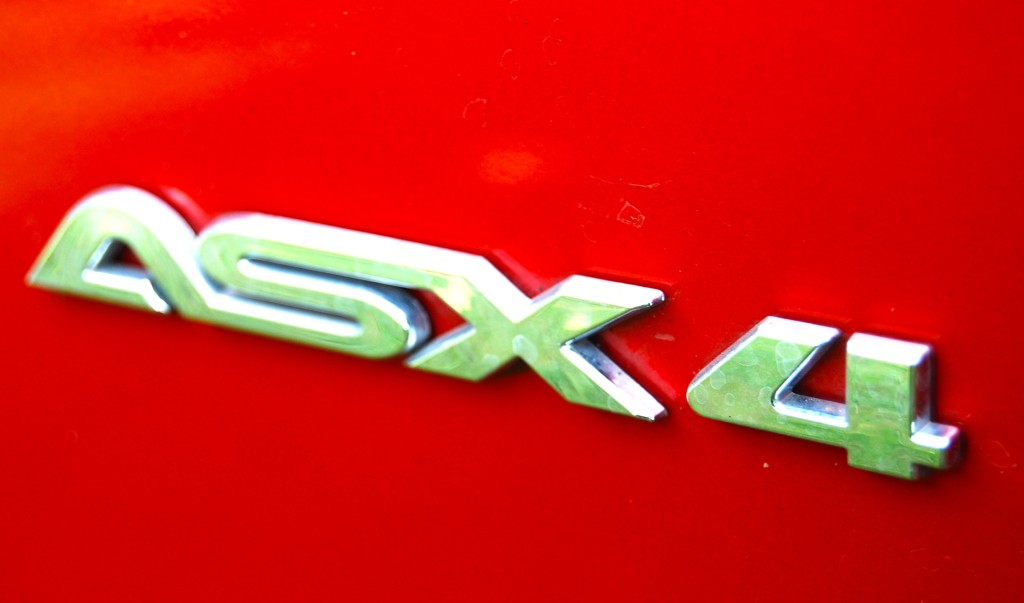 ASX 4s all have selectable 4WD, ASX 2s are all driven by their front wheels, and in-between, there’s the ASX 3 – this might seem confusing but Mitsubishi always use numbers to identify their differently specced models. If  geography or lifestyle dictates that your ASX simply must be a 4×4, it’s Diesel only with a choice of a 1.8l 16V, or the 2.2l 16V unit we have on test here. The differences in performance between the two are negligible (118mph vs 115mph, 10.8s vs 10.6s 0-62mph in 2.2l and 1.8l respectively), where the 2.2l comes into its own is in terms of torque available (360Nm vs 300Nm), so if your ASX would be used as a towing vehicle, or if you must have an auto ‘box, I’d be tempted to plump for the larger engine. On the other hand, if you’re just after something with 4WD capabilities to guarantee that you’ll get to the top of the hill you live on in mid-January, I’d go for the 1.8 – it’s cheaper to run, cheaper to buy and is possibly a little more refined than this slightly gruff 2.2l. 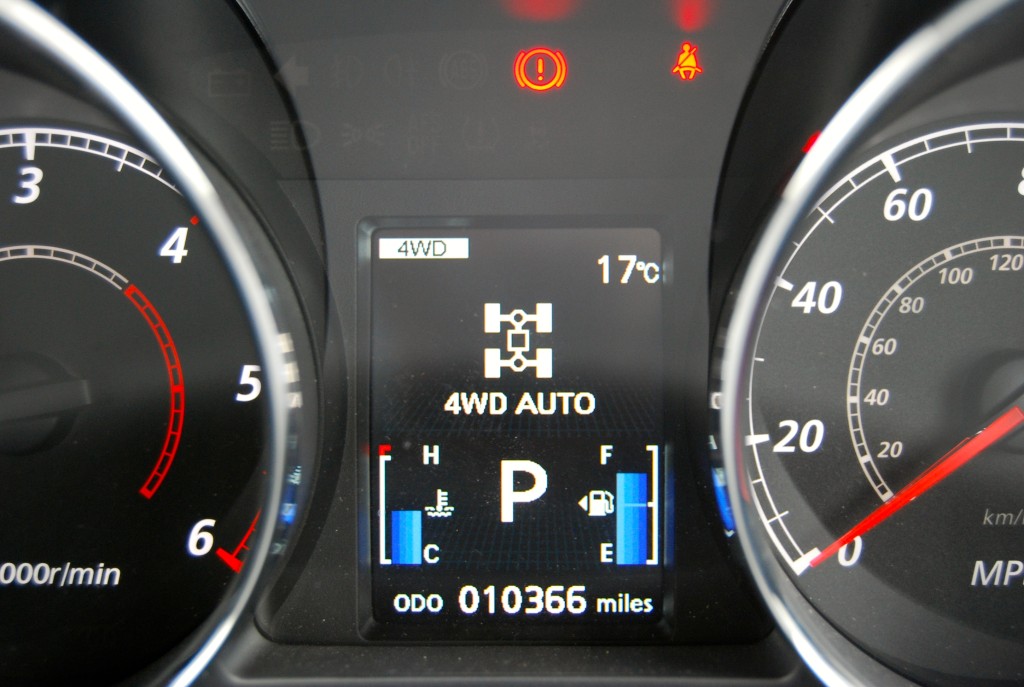 Of course, if it’s just the looks and safety aspects of a crossover that floats your boat, there’s plenty of 2WD models available in both petrol and Diesel guises – they might not get you up the Eiger but they represent a big financial saving and are still generous in terms of standard kit. 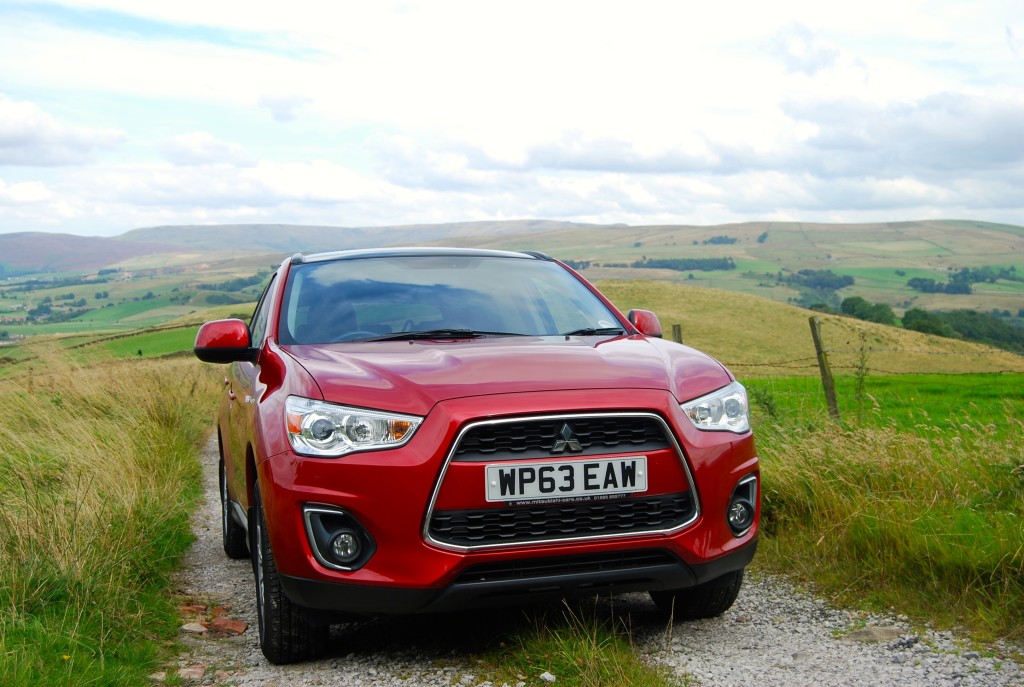 This 2.2l Diesel might not be the most cutting edge power-plant in the world, a fact highlighted by its lack of stop-start technology, but the automatic gearbox that it’s mated to is fairly sweet around town, and shifts through its ratios with the minimum of fuss. Considering it’s relatively small wheelbase, it’s odd that the Mitsubishi ASX possibly feels most settled when it’s eating up motorway miles. The ride that can feel a little firm over our typically scarred roads just seems to iron out any imperfections on the motorway, and you’d be surprised at how relaxing a long distance trip can be. 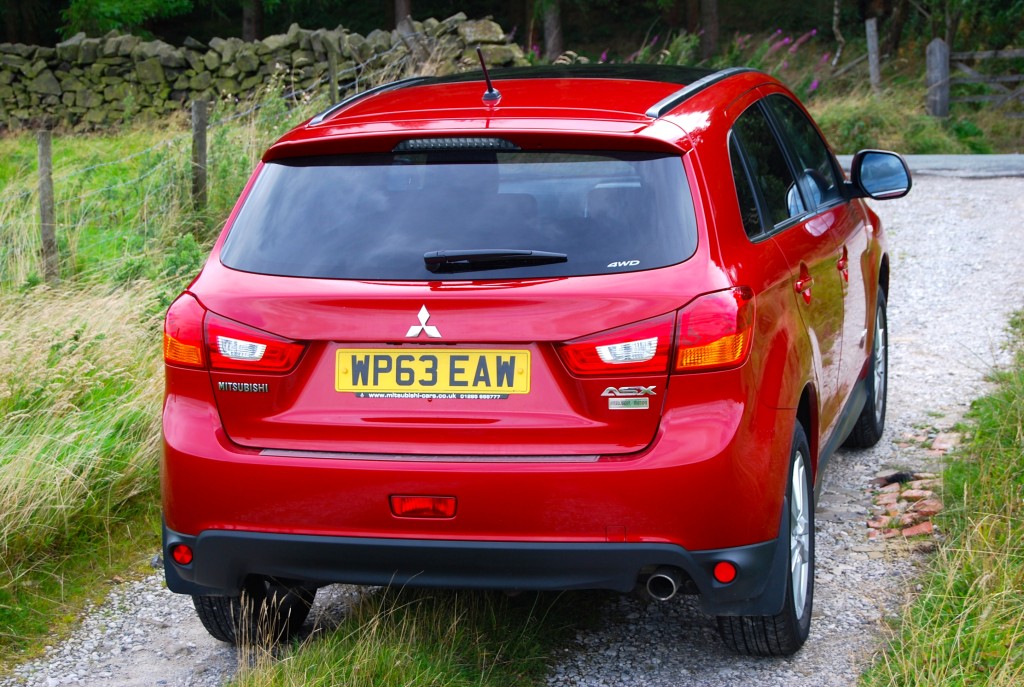 The ASX is a slightly strange fish that should be given merit for standing out from the crowd. It does many things well, but unfortunately seems to do almost as many things wrong, and with no apparent reason. The problem with this is – the crossover sector is one of the most competitive in today’s market, and there’s plenty of alternatives that either look, or drive better than the ASX, and a few that do both.

For full details, go to: www.mitsubishi-cars.co.uk

I'm Ben Harrington and I'm a car lover, freelance motoring journalist and family-man (I'll let you decide the order!) I started Driving Torque in 2010 to share my love of all things motoring with the wider world. Since then, … END_OF_DOCUMENT_TOKEN_TO_BE_REPLACED