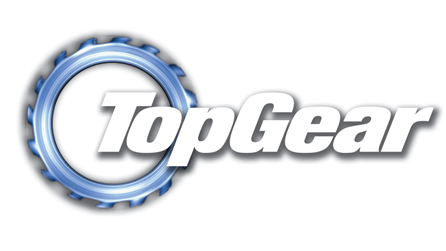 If the rumours are to be believed, the waiting list to be in the audience for the Top Gear television show is of sufficient length to populate over 100 years worth of episodes. Statistically, this makes the odds of ever seeing Jeremy, James, Richard and The Stig working their magic not too dissimilar to winning the Lottery. Twice.

‘What’s the answer then?’ I hear you cry. Well, the answer is simple – buy a ticket, get yourself down to the appropriate venue and witness the spectacle that is Top Gear Live.

Now in its fifth year, Top Gear Live has, prior to 2012, accumulated a total audience of over 1.5 million people of all ages in 18 cities across the globe. From the 25th to the 28th of October, it was the NEC in Birmingham’s turn to host this visual and aural assault on the senses and I went along to the maiden show to see for myself what it’s all about. Being at the very first of this year’s shows meant I was lucky enough to witness  something very special, but more about that later!

Even with nine live shows spread over the four-day event, the enduring  popularity of Top Gear ensured that the majority of performances were sell-outs and the rest were extremely close. The live shows aren’t all you get for your money though, far from it. The voluminous nature of the NEC allows a  large indoor show to be erected featuring, amongst other things, a vast array of supercars, the actual stage and cool wall from the TV show and many of the vehicles used by Jeremy, Richard and James for various challenges over the last decade. ‘Some say’ this could warrant an entrance fee on its own. 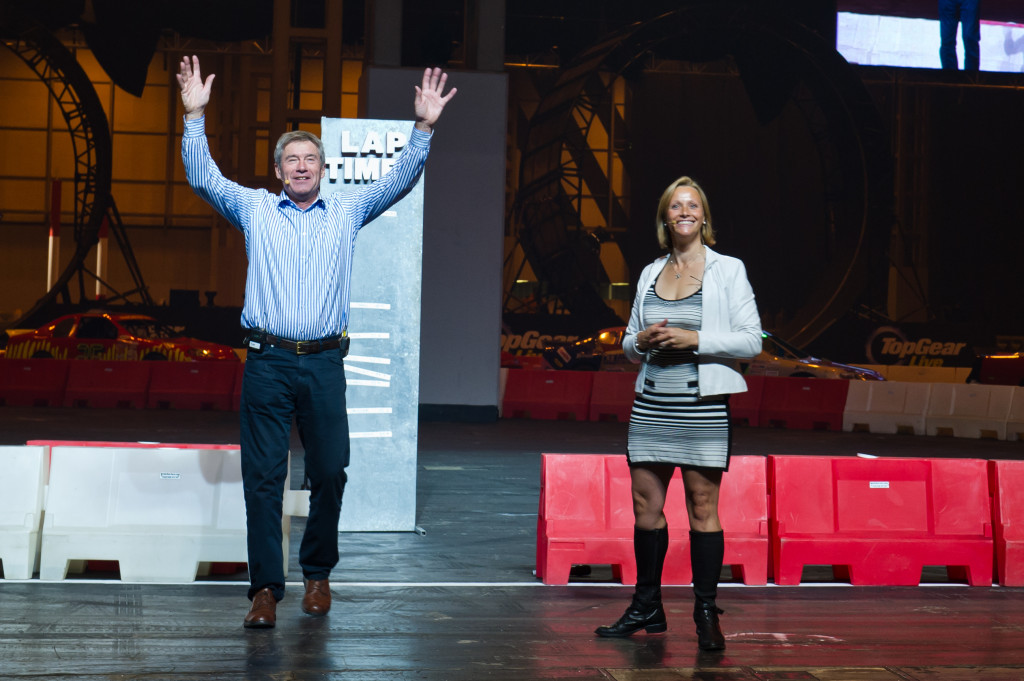 The stage show itself is split into two parts, the first of which is ably hosted by ex-Top Gear presenter Tiff Needell and Vicki Butler-Henderson. Together, they not only introduce, but also participate in, a wide selection of races, challenges and demonstrations around an indoor track. Some serious, some not so serious.

If you’ve ever wondered what delights half-car racing could bring this is definitely the show for you. If not, and you would simply like to experience automotive delights such as WRC cars, drift cars and hot-hatches showing off what they do best, you wouldn’t be disappointed either.

Motorsport is definitely one of those spectacles that’s best viewed first hand. When the visual aspects are combined with the smells and sounds associated, it’s hard to beat and Top Gear Live is fairly unique as it serves all of this up whilst surrounded by walls and a roof, thus amplifying the whole experience considerably. 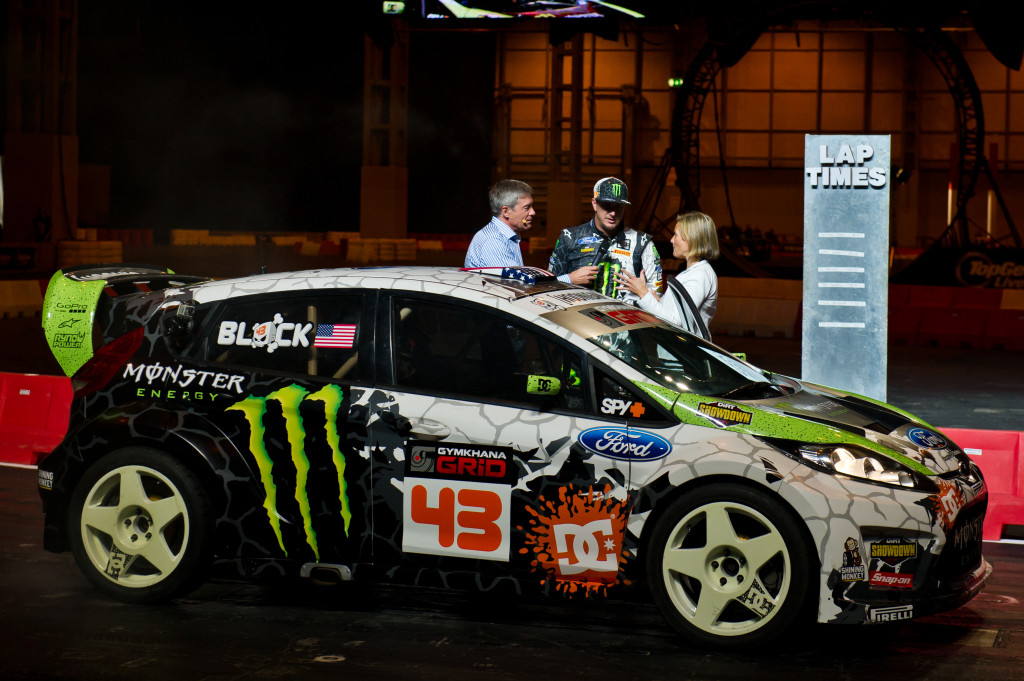 The undoubted highlight of this first section of the show must be a certain rally driver called Ken Block in his purpose-built Ford. What that man can’t do on four wheels isn’t really worth bothering with and if you are one of the few people who’ve not seen a video of one of Ken’s ‘Gymkhanas‘, get yourself over to YouTube and join the tens of millions who have seen this awesome display of car control.

After a brief interlude, it’s onto the familiar Top Gear TV format that we all know and love. There’s the affable trio with their own brand of tomfoolery, cars by the bucket-load and even the TV show’s stage, albeit powered by a V8 engine. (It was actually capable of performing donuts until Jeremy broke it and it had to be abandoned).

A V8 powered stage – every home should have one 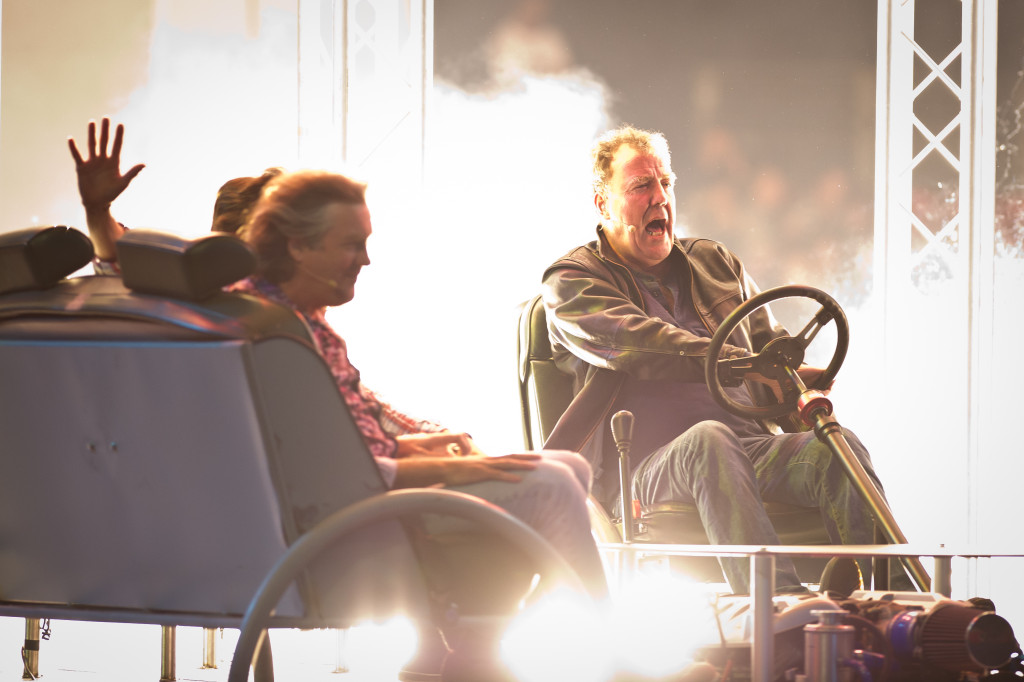 Jeremy, James and Richard on their V8 powered stage

This format lent itself perfectly to some live visual treats that wouldn’t otherwise be capable in front of a live audience. The three tried their hands at car sling-shot, motorbike polo and even allowed three snipers from the British Army to use Jeremy for live target practice. This feature proved very popular for some reason!

The lighting and pyrotechnics that contribute to the show are a large part of its dramatic impact with cars, motorbikes and sometimes even people on fire as they perform stunts and tricks for the crowd’s entertainment. This clever use of effects was probably best demonstrated in Top Gear Live’s own, unique tribute to James Bond and it’s cars which this year turns 50. 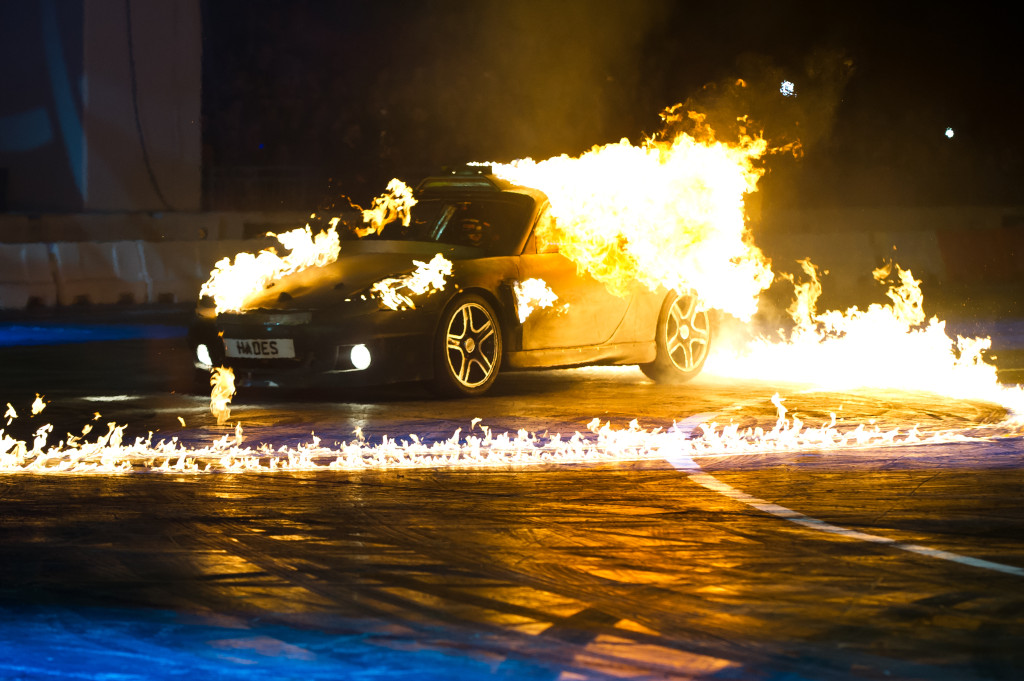 I suspect you may have a slight fuel leak sir!

The conclusion of each Top Gear Live show was something rather special this year. It involved a rather brave man on a motorbike performing a rather impressive stunt. He would not only negotiate a loop-the-loop, but then progress onto another identical one, resulting in something called a Deadly 720+. You may recall that earlier in the year, this feat was achieved in Durban in a car, setting a new World Record. Similarly, if this stunt were successful, it would also be a new World Record but, obviously, only the first time it was achieved. As I mentioned earlier, I was lucky enough to be at the first show and, luckily enough for the rider, it was pulled off with apparent ease. A great piece of riding to behold. 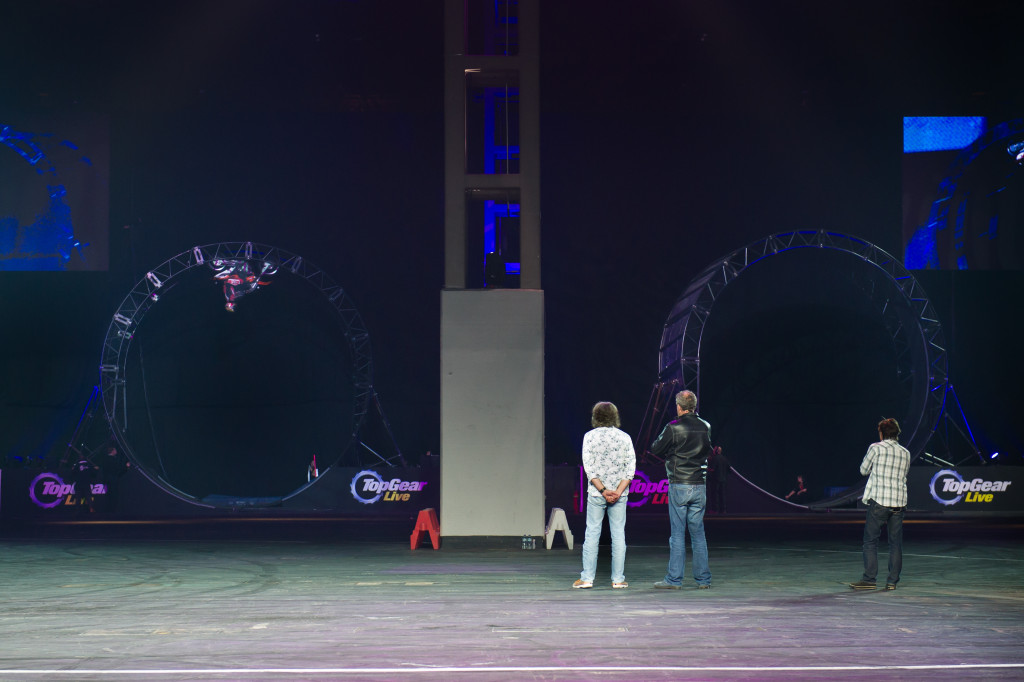 The trio watch nervously as a new World Record is set

Top Gear Live has something to offer anyone with the slightest hint of petrol coursing through their veins and I’d recommend it wholeheartedly. Personally, I can’t wait to see how next year’s show will better this one.

I'm Ben Harrington and I'm a car lover, freelance motoring journalist and family-man (I'll let you decide the order!) I started Driving Torque in 2010 to share my love of all things motoring with the wider world. Since then, … END_OF_DOCUMENT_TOKEN_TO_BE_REPLACED