The last few weeks have been quite eventful for me in motoring terms. Firstly, the Audi has moved on to pastures new. It was a great car but, although neither of us wanted to say it, we both knew deep down that it was time to move on. Sometimes that just happens in relationships, no-one knows why. This of course left me car less (except for the other two cars in the house but they don’t really count) and after two unscrupulous individuals attempted to swap their lies for my cash, I decided to leave the hunt until my return from a well earned rest in Spain. Thankfully some very good friends of ours came to my rescue and offered me the loan of an S-class Mercedes that they happened to have lying around, as you do. For two weeks I stumbled from one petrol station to the next, trying desperately to satisfy the 4.3 litre V8’s insatiable appetite for fuel, groaning at the slightest incline as this would inevitably result in actually pressing the accelerator. A magnificent car, effortless to drive with blistering performance (so I’m led to believe!) but I don’t mind admitting that it was almost a relief when our time together came to a premature end as the car was required elsewhere. 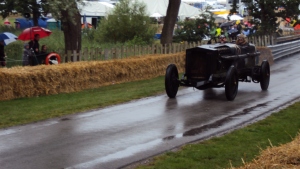 On Sunday the 17th of July, I attended the final day of the Cholmondeley Pageant of Power. The rain was incessant but the action continued regardless with most drivers simply adjusting their driving to suit. The fastest run of the weekend went to Nikki Faulkner in his Lamborghini LP570-4 Performante, beating other modern day super-cars such as the Nissan GTR and the Lexus LFA. The thing is though, lovely as they are, it wasn’t this modern exotica that the crowds had come to see. Their times were impressive but it became apparent to me that it’s the romance of the purer, rawer cars that appeals. For me, the sound of a car is a major part of the attraction and manufacturers are so stifled by bureaucracy today that even Lamborghinis are practically silent. Huge thanks must again go to John Hanlon of Hansport for taking me on the rally stage in Hannu Mikkola’s actual Audi Quattro. Having previously had a ride in it on the press day, John assured me he’d give it 100%, ‘No holding back this time’. I’ve captured it on video but I’m not sure it does justice to the speed of this machine and the skill of it’s driver. One thing’s for sure though, he didn’t hold back! 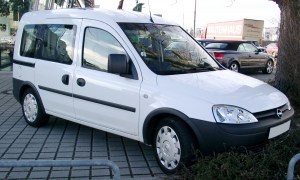 The next day was holiday time and off the Harrington clan flew to sunnier climes in Spain. This brought about some motoring experiences in itself, starting with the stifled laughter of our rental car rep when he introduced me to our steed for the week. ‘Is it this Focus?’ I enquired cheerfully, a sensible guess as they had provided us with this exact car last year. ‘Oh no’ he replied, avoiding eye contact, ‘Yours is an Opel Combo’ I mulled this over for a minute, wondering if this was the Spanish name given to an Astra or an Insignia. The gentleman obviously noticed my confused expression and simply said in reassuring tones ‘It’s very big’. He wasn’t joking. Turns out we do have Opel Combos in Britain, they’re obviously called Vauxhall Combos and they are vans. My prior worries about luggage space evaporated instantly and to be honest I really grew fond of the Pope-mobile. It was nippy, efficient and most importantly of all, the air conditioning was ice-cold. 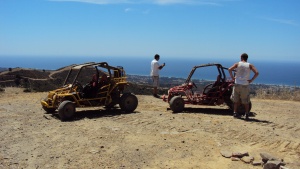 My other motoring experience of our week away came about when my friend Mark and I went on a mini adventure, or more accurately, a buggy safari. This basically entails driving what consists of some scaffolding, a 260cc engine, two seats, four chunky tyres and a steering wheel over the dusty back roads and through the river beds of Marbella. You very rarely get much speed up, the brakes may as well not be there and our buggy cut out regularly but I can honestly say that the fun factor was immense. Point in case again being that you don’t need huge expense and modern technology to have fun on four wheels, simplicity is best. Huge thanks to Mark for organising it, hopefully same time next year.

Back in blighty and the hunt for a car is back on. My very generous friends who lent me the Merc mentioned that there was also a redundant Ford Ka on the driveway that I was welcome to use so this has bought me yet more time. I don’t remember ever driving a Ka before and I’m sure I would if I had as it’s just so much fun. I can honestly say that I wish I’d bypassed the S-class and gone straight for the more simple blue oval. Yes, it would probably fit in the Mercedes’ boot but again, it’s beauty lies in it’s simplicity. The levels of grip are relentless and the feed back through the wheel is reminiscent of the 205 Gti I owned in the nineties, it really is that good.

So I’ve decided to make a sort of summer resolution, from now on, I’m going to be less blinded by big numbers and impressive performance stats and get back to the real thrill of driving, however slow or antiquated that may be. Oh yes, and I’m buying a Vespa………..

I'm Ben Harrington and I'm a car lover, freelance motoring journalist and family-man (I'll let you decide the order!) I started Driving Torque in 2010 to share my love of all things motoring with the wider world. Since then, … END_OF_DOCUMENT_TOKEN_TO_BE_REPLACED