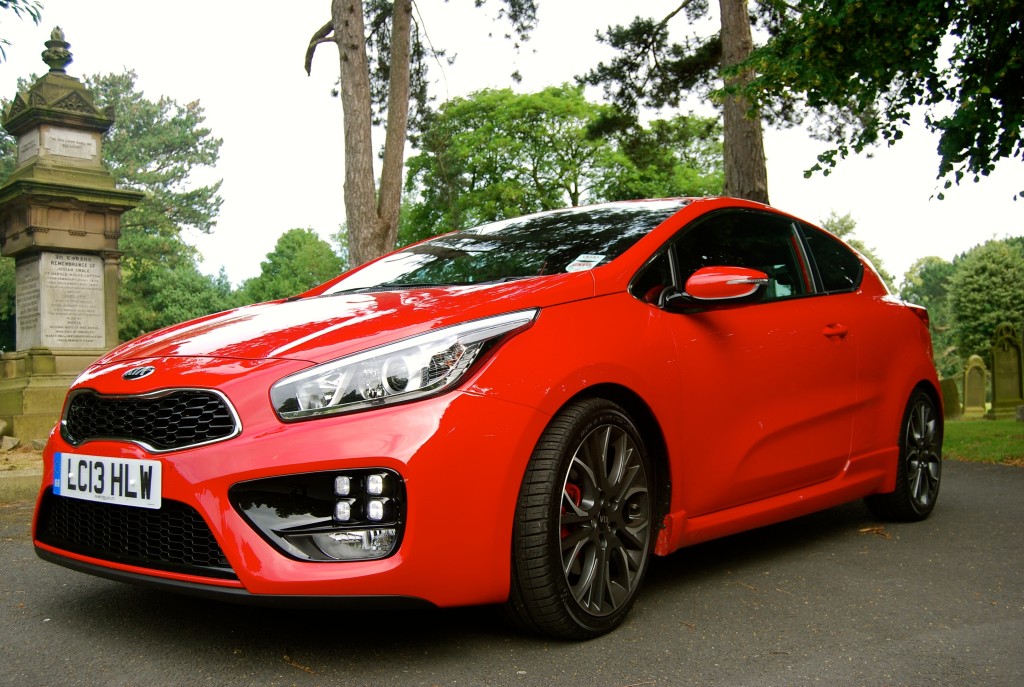 It’s never easy being the new kid in school, trying to maintain your own identity within a well established peer group, and that’s just what Korea’s first hot-hatch  – the pro_cee’d GT is currently attempting to do. So just what have KIA done to gain the respect of the big boys – the likes of VW’s Golf Gti and Ford’s Focus ST? 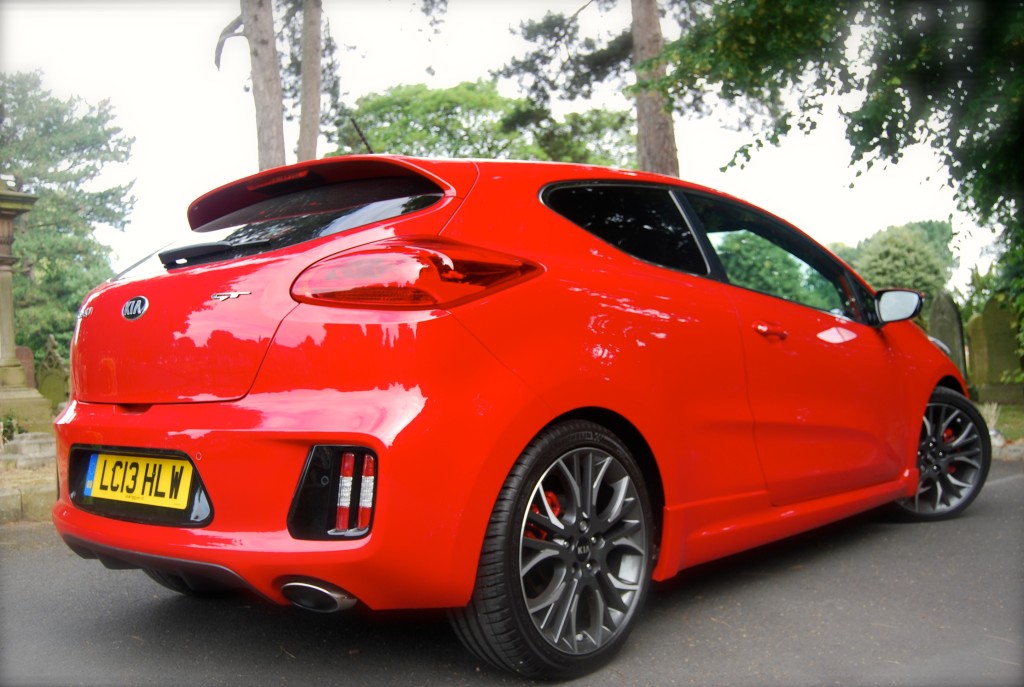 Well, I think the way the pro_cee’d GT looks is a good place to start – from any angle, it’s pretty stunning. Where the old-timers had a recipe to stick to and a look the public have come to expect, the designer of the pro_cee’d GT – Peter Schreyer was only restricted to his own ‘Tiger nose’ design feature – the rest was a blank canvas. From certain perspectives there are hints of Fiesta ST, Astra GTC and Alfa Romeo Brera, but not enough of any-one to take away from the GT’s own identity. It’s sweeping lines, minimal glass-housing and deep side-strakes make the pro_cee’d GT stand out from the crowd and it all adds up to make a distinctive, attractive car that gets attention wherever it goes. 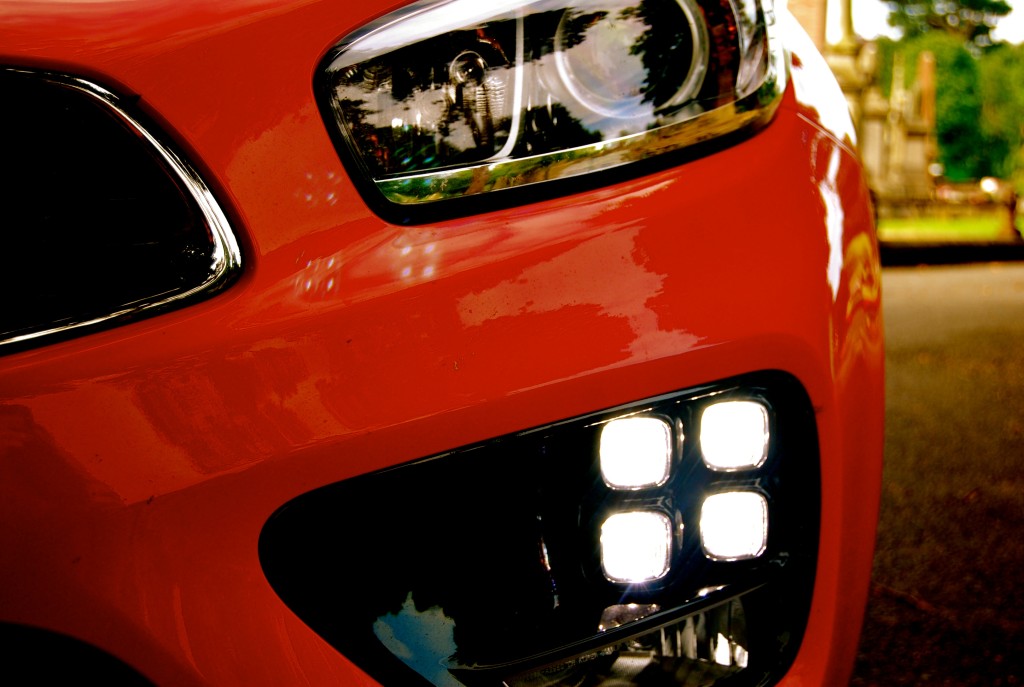 Could only be a pro_cee’d GT

It’s impossible to talk about this car without mentioning its daytime running lights (DRL). Audi were the first to introduce LED DRLs, and for a while they were popularly referred to as ‘those Audi style lights’, but since then (and especially since DRLs became law on new models) they’ve become a common feature on many new cars and each manufacturer has strived to find their own lighting pattern to make them stand out. So, again, just how were KIA going to ensure that their debut performance car gets noticed amongst the sea of bright lights? – Well, with ice-cubes apparently. That’s what KIA themselves have christened this quad-bulb design, but whatever you call them, they’re surely a stroke of genius – if any other car were to be launched with this style of lighting, it’d permanently be referred to as ‘that car with the same lights as that fast KIA’. So they may be complete novices to this sector, but already they’ve stamped their mark and established a trademark feature, just by fashioning a cube of twinkling LEDs. 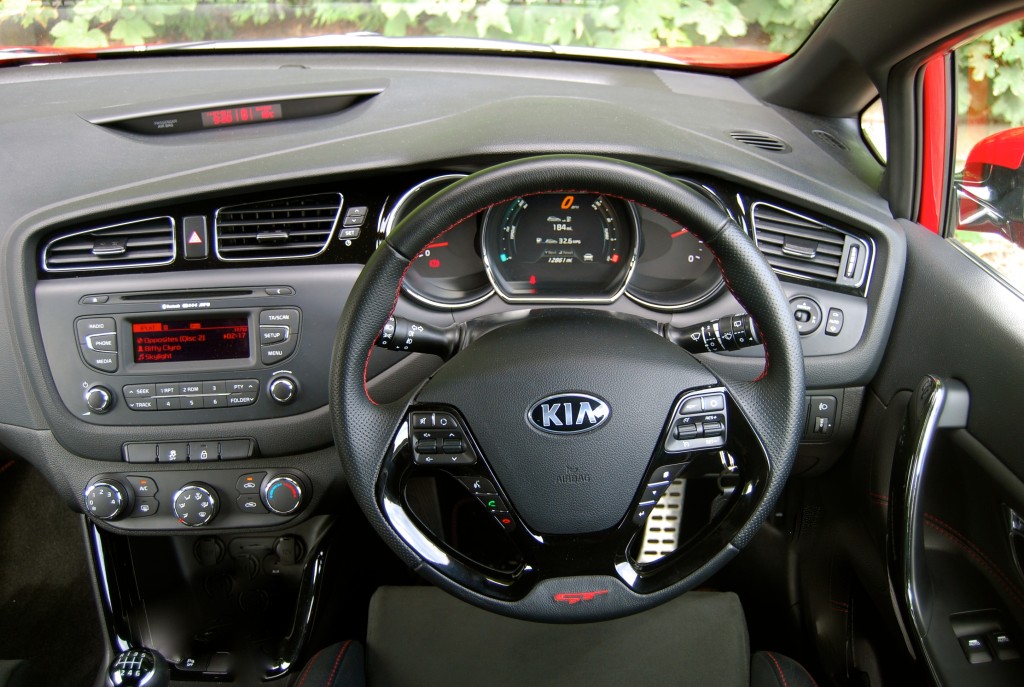 Things are a little more orthodox inside the pro_cee’d GT. There’s the usual varying grades of plastics, dependent on how near the eye-line they are, but the ones you’ll see most are of admirable quality and feel more expensive than you’d warrant, too. The leather and suede Recaro seats with their ‘GT’ logo were always going to impress prospective buyers in this segment, but how comfortable they are might surprise some. I’m not the widest bloke in the world but I’m increasingly finding that my shoulders don’t fit in-between the side bolsters on more sports-orientated seats, leaving my back suspended in mid-air. Not so with the pro_cee’d GT. They provide sufficient support to stop the driver sliding around through the bends, whilst actually letting you settle in and feel cosseted. 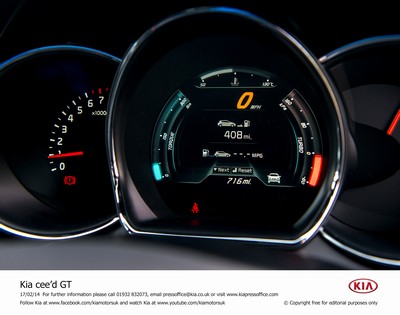 The rest of the surprisingly spacious cabin is a bit of a mixed bag really. The build quality tends to fall into one of three categories; there’s many parts that look solid and feel solid – some parts that look a bit cheap but feel solid enough, and a couple of parts (i.e. the overhead glasses compartment) that look cheap and feel like they might not survive the journey, but on the whole I think you’d be pleasantly surprised with the environment you’re sat in. No modern fascia would be complete without the usual splashes of piano-black plastic that are so de rigueur at the moment, but press the GT button on the steering wheel, and the electronic dash transforms into something that you’ve probably never seen before. On each side of the central pod a neon, day-glow millipede appears and climbs up and down the display – these act as gauges to demonstrate the turbo pressure level and the amount of torque being created. Now, I’m inclined to think that the majority of drivers wouldn’t really know what to do with information pertaining to their generated torque levels, but either way, it looks impressive and, yet again, is a feature that can be associated with the pro_cee’d GT.

It may not seem like such a big deal, but I’m  getting a little irritated with certain manufacturer’s attempts to personalise steering wheels. Well, if you’re like me then you’ll be more than happy with the pro_cee’d GT and its perfectly shaped and sized, multi-functional, traditionally round effort. Whether it’s accidental or not is another matter, but as you grab hold and glance through to see the GT’s natty graphics flash up on entry and exit – there’s a real sense of pride in what KIA are trying to achieve here. 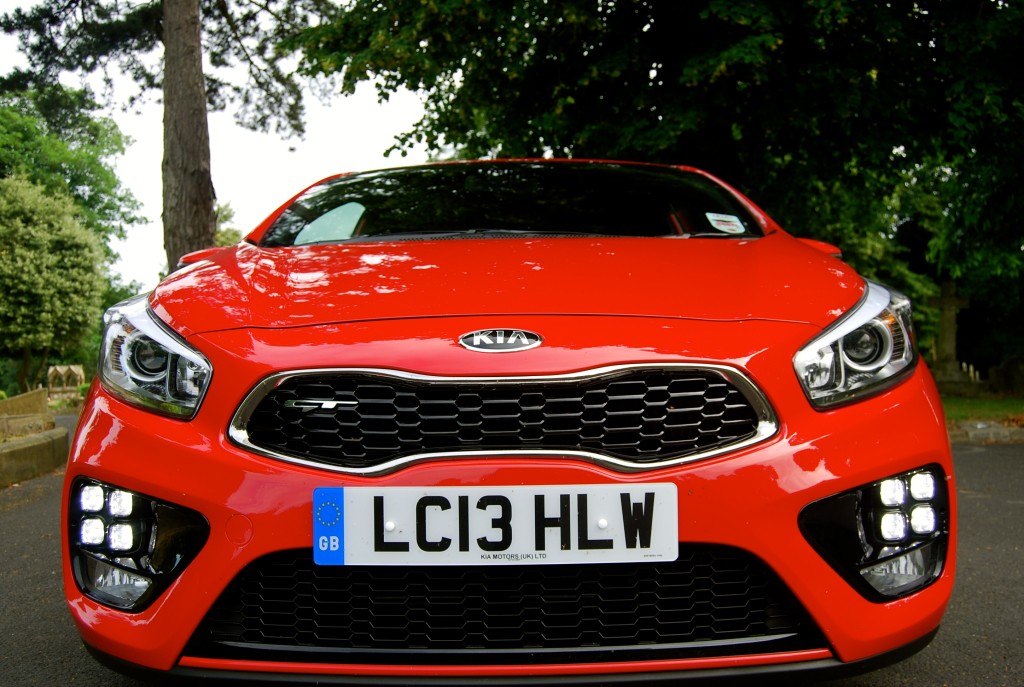 For the time being at least, the pro_cee’d GT is available with just one engine – a turbocharged derivative of the 1.6l ‘Gamma’ engine that’s found its way into many KIAs and Hyundais. With 201bhp and 195lb ft of torque on offer, the figures are impressive enough without breaking any records in the super-competitive hot-hatch segment. 143mph and 7.4s to 60mph would have left everything else in its wake a few years ago, as would the 38.2 combined mpg, but with engine technology moving at unprecedented rates these days, the pro_cee’d GT struggles to match its peers and the whole driving experience feels somehow detached and distant.

In contrast, with independent Macpherson struts up front and independent multi-link suspension setups at the rear, the way the pro_cee’d GT navigates around turns doesn’t leave much to be desired at all. The ride feels rigid enough to let you know it means business, without making that fatal mistake found in some hot-hatches and leaving it nigh-on impossible to live with on our less than perfect roads. You’d really have to push the GT to get the nose pushing wide through corners and the whole car feels unflustered as you straighten up or change direction in a hurry. 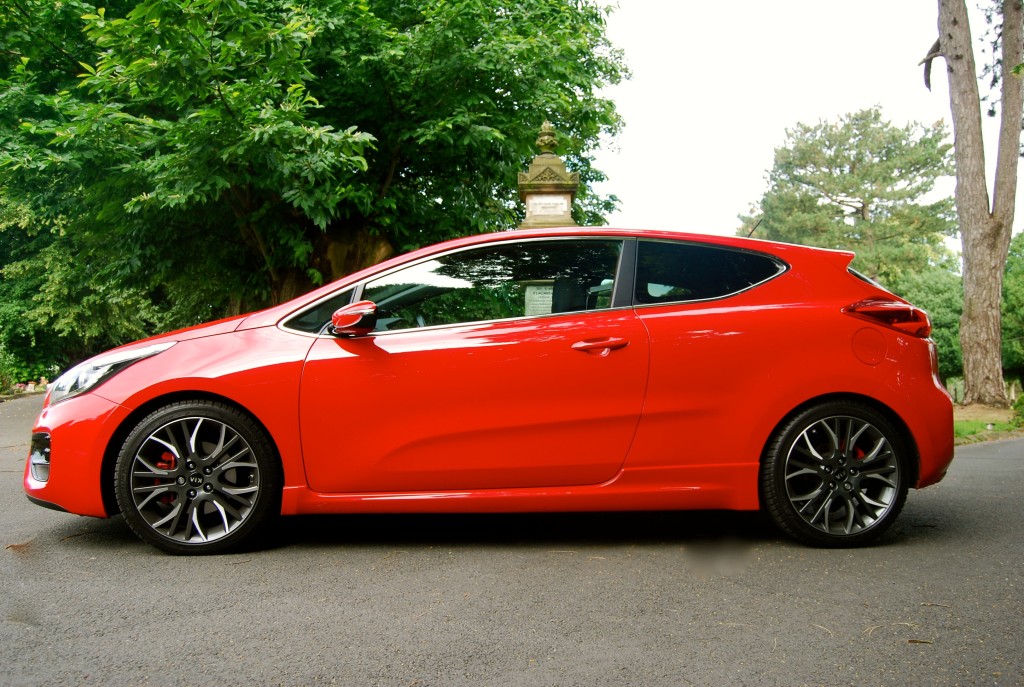 We all know that car makers are being increasingly constrained regarding how much noise they’re allowed to generate, and the likes of Ford have come up with clever systems that pipe engine noise into the cabin, keeping people like me who place such importance on the aural quality of a car happy. It might be to keep costs down, or it could be due to the Korean’s stereotypically polite nature, but the pro_cee’d GT doesn’t seem to place much importance in this area, and to be honest, they could do with turning the volume up a tad. Turbo-charged engines are always going to be muffled by their very nature, but inside the GT really is whisper quiet, and outside, the few pleasant burbles the engine makes could easily go unnoticed.

Mention KIA to anyone and they’ll probably want to talk about two things; the price and the warranty. I’ve not included them in this review yet as I prefer to judge a car on its merits as a car, not as an asset, but I don’t think I can go any further without bringing them into the conversation. First of all, that market-leading seven-year warranty; a confident move some might say, others could say it’s a little foolhardy. Well, looking at it purely subjectively, the seven-year warranty was introduced alongside the pro_cee’d’s sister car – the cee’d in 2007, exactly seven years ago. If the concept was flawed and the product wasn’t up to such a lengthy guarantee, KIA would be hemorrhaging money by the bucket-load by now, and the offer would have to be revised. Having had first-hand experience of the build quality of KIAs (some slightly flimsy interior features aside) I’d say that the pro_cee’d GT feels properly screwed together and capable of withstanding anything you’d care to throw at it. 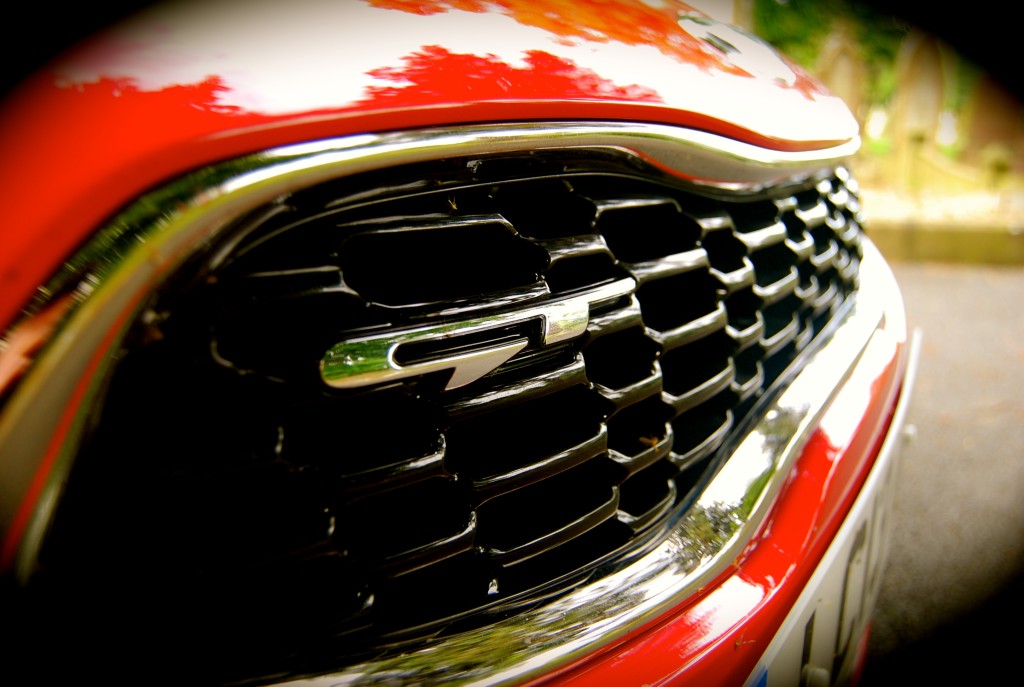 So what about the cost? Is the £19,995 price-tag enough to tempt people out of their GTis and STs? It might take a brave person to turn their back on the more established models and opt for the KIA, and the people who only know badges, not the car behind them might be impossible to convince just yet. But whichever may you look at it, the pro_cee’d GT offers a teasing saving of nearly £3K over the alternative Focus, and a massive £6K+ over a Golf Gti, and that’s before you add any extras or extended warranties.

So have KIA done enough to establish themselves amongst the hot-hatch hierarchy? I’m not completely naive and I’m not going to say that the pro_cee’d GT is better than the competition in every way, but I will say that in some aspects it’s better than its peers, in many ways it’s just as good, and in a few ways it’s got to try harder. But taken at face-value, this car is well-built, a lot of fun and undoubtedly belies it bargain-basement price-tag.

I'm Ben Harrington and I'm a car lover, freelance motoring journalist and family-man (I'll let you decide the order!) I started Driving Torque in 2010 to share my love of all things motoring with the wider world. Since then, … END_OF_DOCUMENT_TOKEN_TO_BE_REPLACED