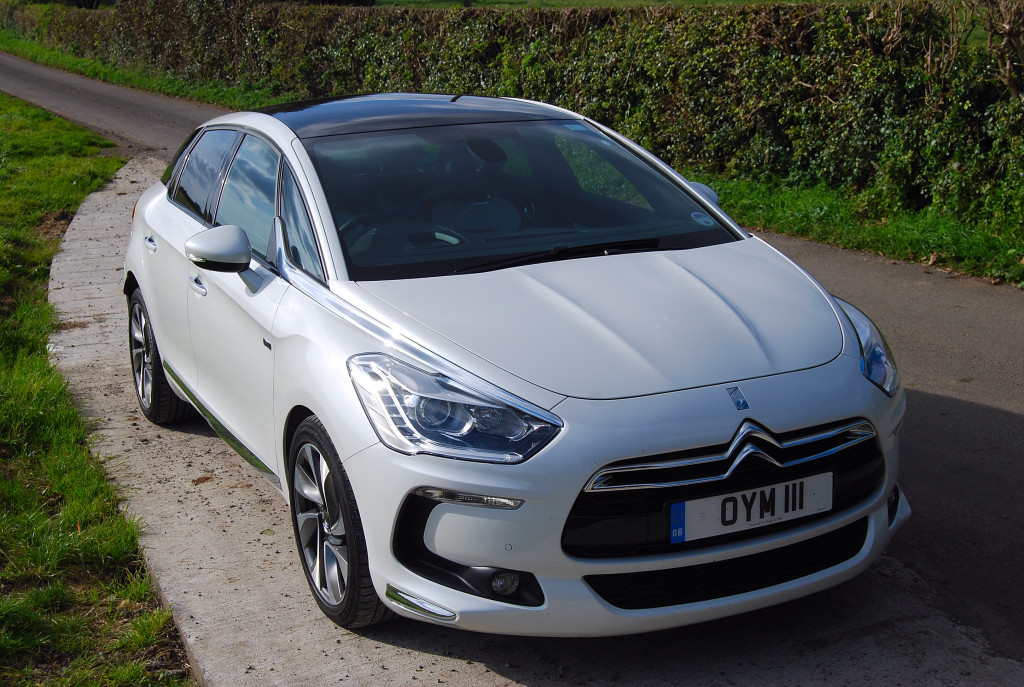 With the Citroën DS5, you can pretty much forget everything you know about French cars. In fact, with the release of this Citroën DS5 Hybrid4, you’d probably do well to forget quite a few things about cars and driving them in general. Automobiles from our Gallic cousins always attract a myriad of tired old clichés such as ‘quirky interior’ and ‘typical French flair’ but this DS5 is different. Still very, very French but, well, different.

According to Citroën themselves, they envisage the DS5 creating a little niche for itself, somewhere between ‘D’ segment cars such as VW‘s Passat and Vauxhall’s Insignia, and more premium models such as VW’s CC and Audi’s A4. Even Mercedes would be proud to create this new segment, but the overall perception of quality that emanates from the DS5 makes Citroën’s aim a realistic target. 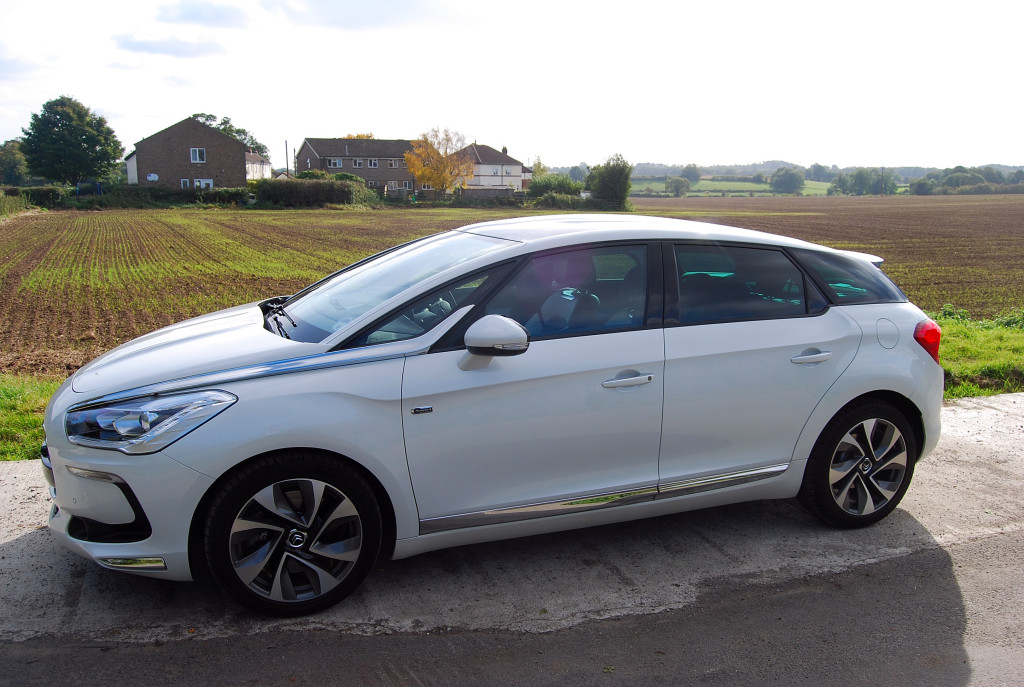 When assessing the aesthetics of the DS5, I think it’s only fair to judge it on its own merits. It’s too easy to fall into the trap of comparing this model to its little sister – the DS3 and to consequently find the DS5 wanting due to its sheer size and dimensions. Taken on its own, the ‘5’ is a pleasurable car to behold with every last line and feature trying it’s best to impress. There are so many visual treats on the DS5 that to gain a true appreciation, I don’t think a picture can really do it justice. In the metal, and given plenty of time, one seems to find a new highlight with every glance. Take, for example, the ‘A’ pillar that starts in its conventional position at the base of the windscreen but then runs the length of the car and tapers to a point around the top of the boot. Or the upturned metal boomerang which forms the top of each headlight, follows the waistline and finishes half way up the front quarter-light windows in a familiar shark’s-fin style. 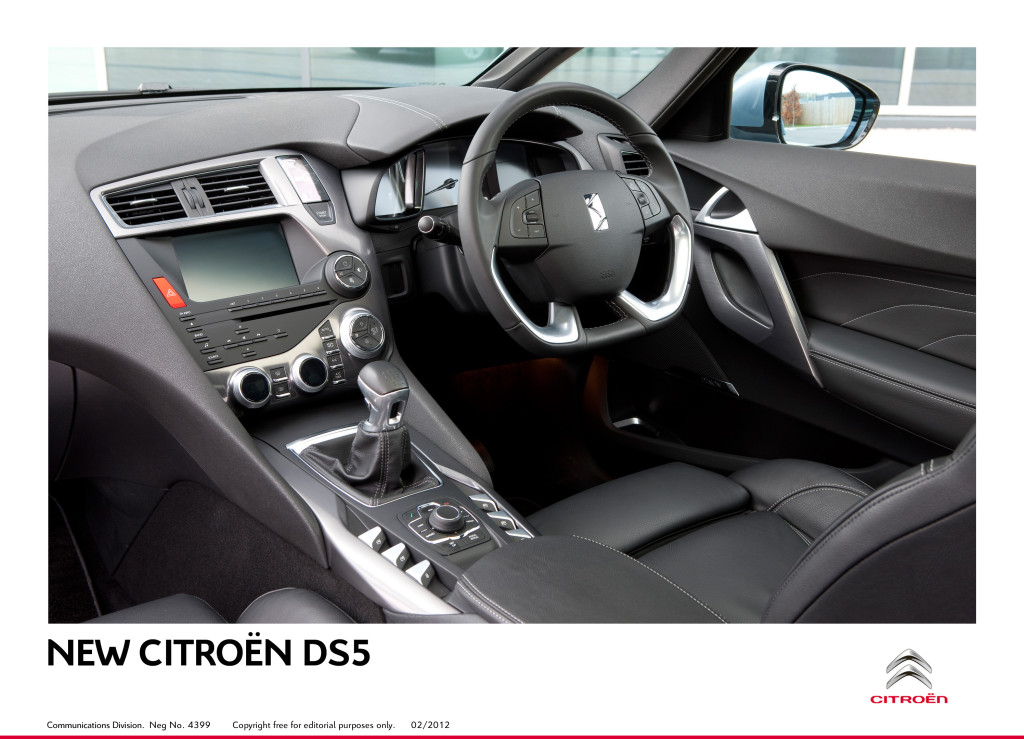 Open the driver’s door, however,  and the attention grabbing nature of the exterior somehow pales into insignificance. Just when one thought that everything which could be done with the conventional layout of a car’s cabin, had been, the DS5 moves the goalposts. Citroën apparently drew inspiration from a fighter-jet’s cockpit for the DS5’s cabin – ‘that’s not original’ I hear you cry ‘BMW and Saab did that years ago’. Well, yes, Citroën obviously aren’t pioneers in this approach but, whichever plane they used as a template, it’s not been used before. There are buttons, dials and switches aplenty, all beautifully designed and crafted but not necessarily by the same person at the same time.

In my head, I imagine artists drawing up ideas at Citroën for many years, coming up with innovative designs for everything from door handles to window switches. These fictitious artist’s ideas are consistently met with comments of approval and appreciation but then they’re invariably shelved due to financial constraint and a lack of nerve, the disappointed designer sent packing with promises that their work will be considered again in the future.

Back to reality and this car’s interior is a new home for all of those previously mothballed ideas, all of them innovative and striking but slightly head-ache inducing when presented together in such a relatively small space. It’s certainly not unattractive, it just might take a little getting used to.

From the driver’s seat

One decidedly un-French aspect of the interior is the driving position and the use of space. Once in the driver’s seat, the steering wheel seems to stand remarkably proud of the unusually deep-dash. Both then combine to give the sensation of piloting the DS5 from somewhere near the rear seats, not unlike where WRC drivers are positioned to achieve optimum weight distribution. Between the front seats is an oversized transmission tunnel, not only housing all manner of switch gear but also lending much weight to a secure, cosseted environment. A very welcome feeling but quite the opposite of Citroëns of old with their voluminous quantities of space. 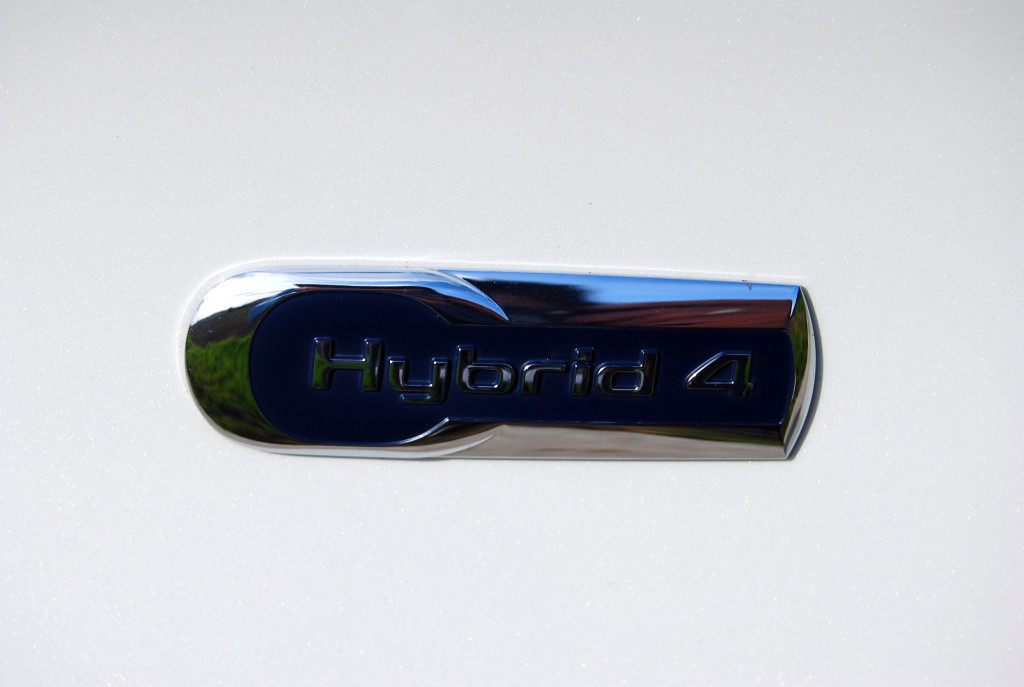 One aspect of our test car that should be paid special attention is it’s Hybrid4, 4wd drivetrain and once on the road, it can become all-encompassing. A PSA development, it differs hugely from other hybrids as, not only is its conventional engine a common-rail Diesel, but its electrical motor is completely independent and the two never meet. This means that the platform lends itself to far greater adaptability than traditional hybrids and also aids more even weight distribution.

In Layman’s terms, the Hybrid4 system utilises a conventional engine to drive the front wheels and an electric motor to power the rear. Both can work completely independently of each other or concurrently which is where the 4wd capabilities occur. There is a certain amount of driver input to govern how the car is powered and this is controlled by a rotating knob with four available modes; ZEV – electric motor only which works up to 37mph, assuming there is enough battery life left. 4wd – to provide extra traction on rough ground or in low grip conditions. Sport – this also utilises all four wheels but allows for a more enthusiastic driving style. Auto – this is the default setting and, I would imagine, the one used 99% of the time as it decides when to use Diesel, electric or both.  The batteries for the electric motor are  recharged purely by harvesting power from the rest of the vehicle, not by being plugged in as you would with an all-electric car.

On the digital dashboard of the DS5, there is a diagram of the vehicle showing which wheels are being driven at any particular moment and this is where the fun really starts. Not only will it show how much power is being used, it also displays power being returned back into your batteries – a highly satisfying experience. It’s very easy to quickly become enthralled by this demonstration of power-farming and it starts to feel like a game. I must have slightly lead feet as I struggled to keep it in electric only mode for any length of time – even if ZEV mode is selected, it will defect to Auto mode if it feels that the driver is demanding performance that the batteries alone can’t provide.

In Sport mode, it is possible to achieve some spirited performance in the DS5 Hybrid4 but I felt that it was slightly unnatural. At high revs, the common-rail Diesel engine becomes quite an intrusive noise in the cabin and this detracts from what is usually a serene driving experience. For me, the DS5 is about gracefully wafting around with the minimum of fuss, not trying to break speed records in what is, due to its extra motor, quite a heavy car. 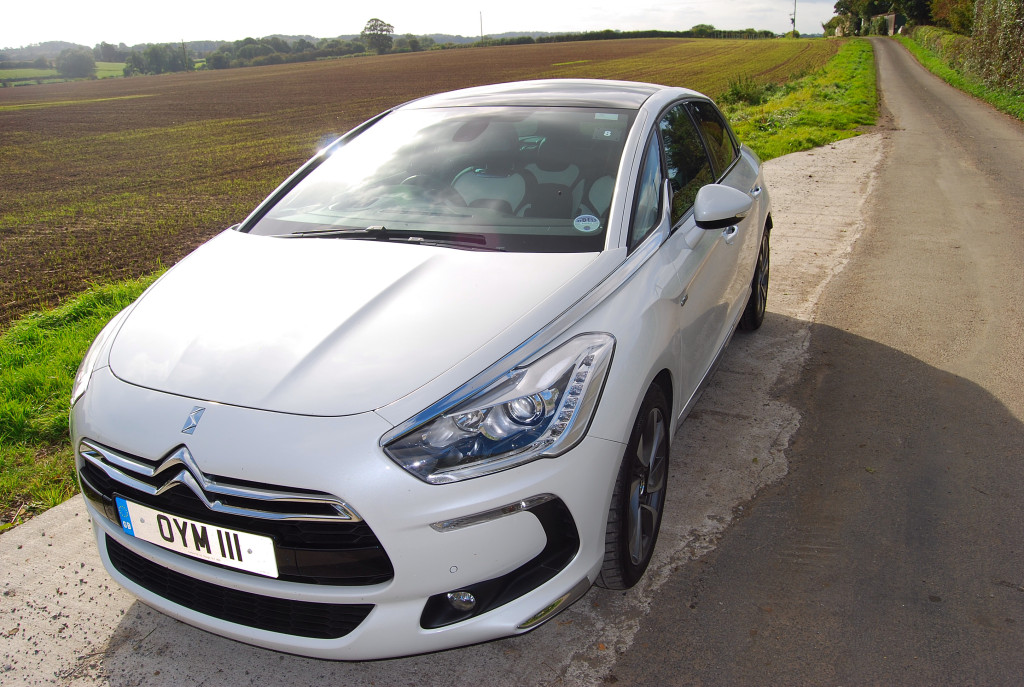 Citroën’s DS5 is a huge step forwards for the marque in terms of quality and design and I hope certain aspects are filtered down to the rest of the range. DS’ now account for a quarter of all of Citroën’s sales and surely propel them to the top of the ‘French Trio’ tree. The extraordinary levels of design that have gone into the DS5, coupled with the ingenuity of the Hybrid4 system make this particular model a force to be reckoned with. At £32,000 before options, however, I sincerely hope it avoids that most French of pitfalls – being too expensive for the brand. I feel that this car can carry it off given the chance and could provide some credible competition for its German cousins. I hope so too.

I'm Ben Harrington and I'm a car lover, freelance motoring journalist and family-man (I'll let you decide the order!) I started Driving Torque in 2010 to share my love of all things motoring with the wider world. Since then, … END_OF_DOCUMENT_TOKEN_TO_BE_REPLACED