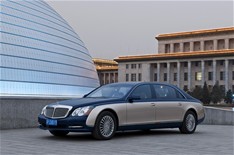 Readers of a nervous disposition should probably do themselves a favour and not focus too hard on this picture of the forthcoming Maybach, due for release in 2014. See what I mean? – I did warn you!

Since Mercedes revived the Maybach brand and released the imaginatively titled 57 and 62 in 2002, they have been terrifying young and old in wealthy neighbourhoods across the globe and this one looks certain to follow in that tradition, a sort of son of Frankenstein if you will.

According to one Mercedes spokesman, they are keen to use the Maybach ‘as a technological showcase’ for the rest of their line up, a move which seems very sensible; after all, if you can’t use a £500k Limousine as a showcase, what can you use? From customer feedback, they have also determined that keeping the traditional three box design is essential, especially for existing Maybach owners whom they hope to tempt out of their now ageing models.

I’m fairly sure however that when carrying out their customer feedback, they will have received very few, if any forms stipulating that the new model must be, without question, the most hideous looking car to have ever made it into production.

It’s not just me is it? I appreciate that Maybach’s most obvious competition – the Rolls-Royce range are ostentatious, perhaps even vulgar but they are at least distinctive, you at least want to look at them even if you ultimately decide you wouldn’t want to own one. This new Maybach pulls off the wondrous feat of being ludicrously expensive and yet appearing to have been designed on a shoe string.

I find this car strangely reminiscent of the pictures we regularly receive from China. You know the ones – where you sort of recognise the car in point but then realise that it’s actually just a rip off of a premium European brand e.g. the stunningly awful Geely GE seen below.

Sources close to Aston Martin are reporting that they could be involved in the manufacture of this new Maybach. Just a shame that Aston weren’t given the reins when the designs for the exterior were being drawn up!

I'm Ben Harrington and I'm a car lover, freelance motoring journalist and family-man (I'll let you decide the order!) I started Driving Torque in 2010 to share my love of all things motoring with the wider world. Since then, … END_OF_DOCUMENT_TOKEN_TO_BE_REPLACED