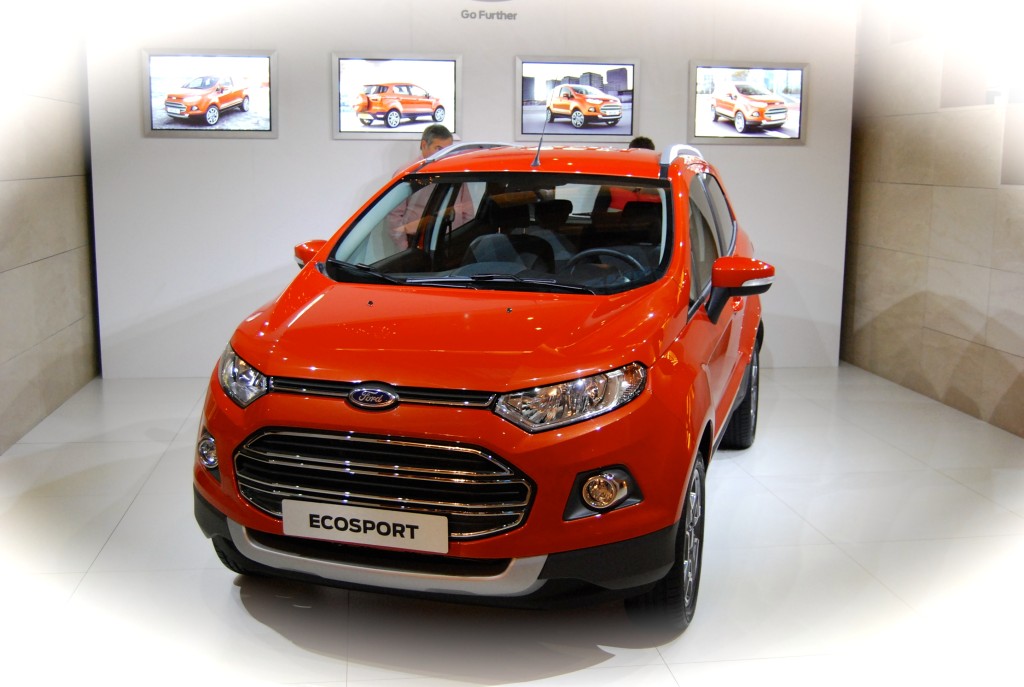 The small SUV market has increased 400% in Britain in the last 3 years. It’s expected to grow exponentially in the future and Ford want their slice of this potentially lucrative pie. Bring on the EcoSport (pronounced ‘echo’, not ‘ee-co’, by the way).

Readers in South America will be well accustomed to the EcoSport as they’ve seen it enjoy massive popularity there since its launch in 2003, with over 700,000 units being shifted at last count.

The EcoSport we see here has been available in South America since 2012 and is the latest of Ford’s ‘World Car’ projects, being built in India, Brazil and Thailand – Britain will get cars built in their Indian factory – a first for Ford UK.

Aimed primarily at professional 30-somethings who’s lives are increasingly reliant on a constant online connection, the new EcoSport promises tempting collaborations to go hand in hand with their Microsoft based SYNC infotainment system, commencing with the likes of musical streaming giants – Spotify. 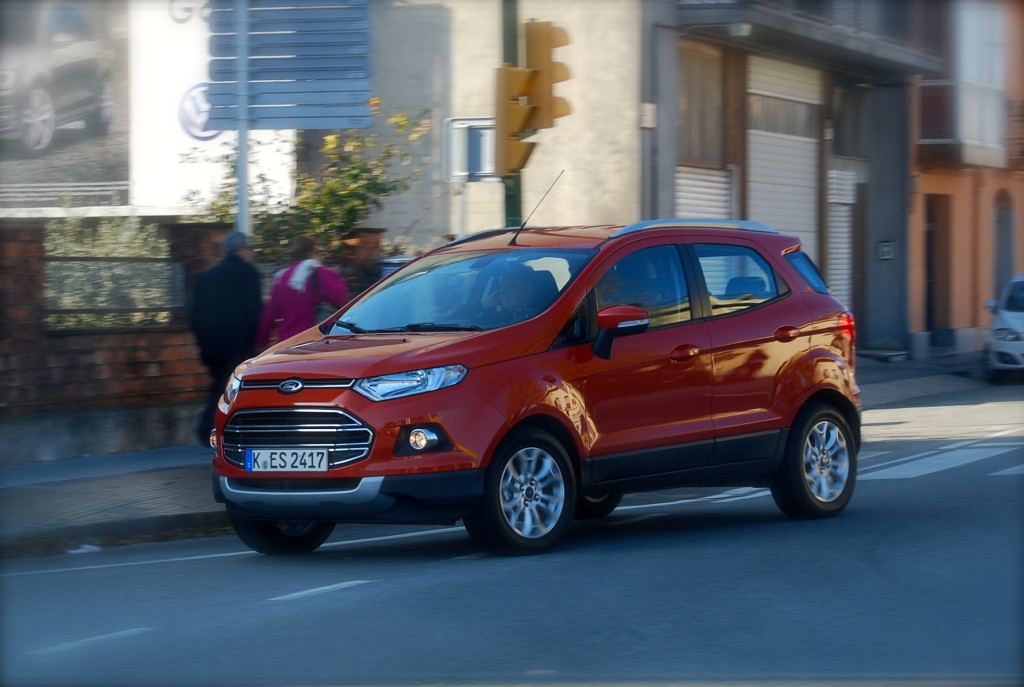 The EcoSport looks at its best on the move

The EcoSport is based upon the excellent Fiesta – as good a place to start as any. Styling cues are also quite obviously from the Fiesta, although it’s been raised and beefed up to provide the all important SUV style that’s currently so fashionable. Ford aren’t fighting the realities of this target market though; they’ve wholeheartedly accepted that the image which SUV ownership provides is all important – but the last thing these same buyers want is the expense of running an actual 4×4. It may seem quite perverse but why swim against the tide? To this end, Ford aren’t making 4WD an option on European EcoSports, even though it is available in foreign markets. That said, jacking the suspension up does give the Ford EcoSport the ability to wade up to 550mm – not exactly Defender territory but very welcome when caught in a flash flood situation, I’d imagine.

In the flesh, the Kuga lineage is very apparent in the EcoSport’s styling, again no bad thing, but there are a few visual aspects that I found a little difficult to love; the front wings and wheel arches are a tad slab-sided and sit a fraction forward of the actual wheels, detracting from the ‘Sport’ look which is generally a wheel at each corner. The chrome front grill may not be to everyone’s taste either and removing it or requesting a different colour isn’t an option – that’s obviously fine if you like that kind of thing but, for me, it just screamed ‘towel rail’ a little too loudly. 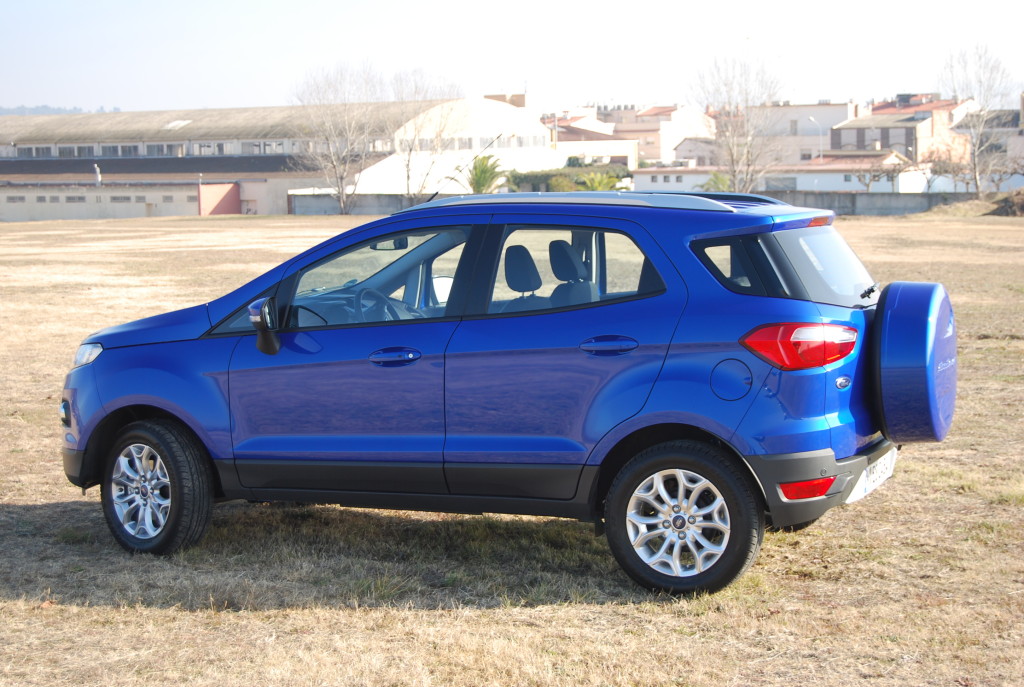 Aside from that, it’s a characterful, handsome little thing and it’s definitely one of those cars that looks better on the move than stood on static display. It comes complete with some natty go-anywhere touches such as its outboard spare wheel, which could undoubtedly have been accommodated in the standard position – behind the rear bumper – but it’s these features that contribute towards the all-important SUV image.

One aspect of the Ford EcoSport that consistently rears its, somewhat unwelcome head is the fact that it was never designed for the European markets. There are constant reminders all over the car that it’s been designed and built to satisfy the less demanding markets in South America and Asia, and then re-jigged a little for our fussier tastes.

Not least of which is the interior in general. It’s inescapably Ford and is almost identical to the inside of a Fiesta, with its smartphone-esque styling and piano-black inserts. It’s the quality aspect that’s slightly lacking though; The grade of plastics used is scratchier than we’d like and the door pulls have a tendency to creak; Want somewhere to hang your coat or hold onto around a particularly lairy bend? – tough – grab handles are curiously absent; The materials the fairly unsupportive seats are covered in feel cheap and emit a certain glow, not dissimilar to a £25, machine-washable suit. 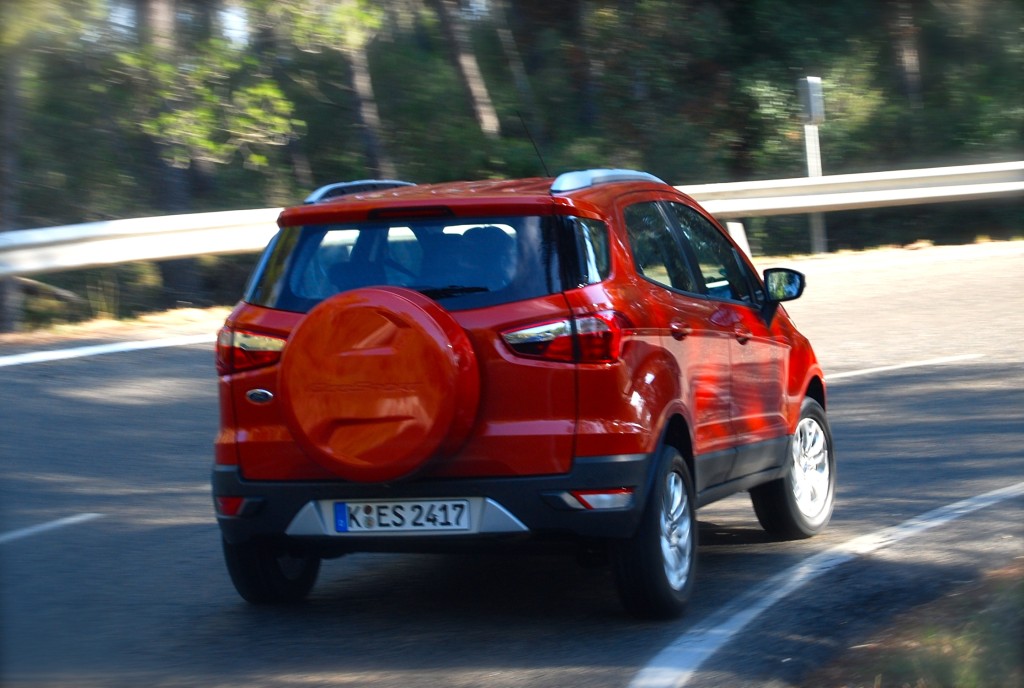 The worst offender however is the SYNC system itself; its size and quasi dot-matrix appearance leave a lot to be desired when compared to the units found in today’s Fiesta and Focus. Considering its capability to link with smartphones and provide access to Spotify and TomTom, amongst others, it’s visually lacking to say the least, the EcoSport seems to have been provided with a BBC Micro, as opposed to the Playstation 4 found in other Fords.

One aspect of the EcoSport’s interior that can’t be faulted though, is its living space for passengers, front and rear. I’m 6′ and whilst sat in the passenger seat, I moved it back to a position which meant I had to stretch considerably to touch the bulkhead with the ends of my toes, and there was still plenty of room behind me for an adult or child to sit in complete comfort. Now that’s impressive in a car in this class.

On the road, the EcoSport really comes into its own and reminds us exactly where Ford’s strengths lie. It’s available with either a 90PS 1.5 litre Diesel unit or a choice of two petrol engines – a 110PS 1.5 litre or the all-conquering 1.0 EcoBoost lump. The Diesel and EcoBoost engined models were available to drive at the launch and it’s quite clear that the peppy 3-cylinder is the one to go for. It may lose out a little in the way of emissions and economy to it’s oil-burning sister (125g/km vs 120g/km & 53.3mpg vs 61.1mpg) but it’s £500 cheaper and comes free with a great soundtrack and bucket-loads of character. If you absolutely require your EcoSport to change gear itself, you’re stuck with the 1.5 litre Duratec petrol, which at £16,495, becomes difficult to justify. The manual Duratec is the cheapest in the range at £14,995 but with CO2 emissions of 149g/km and 44mpg combined, it’s a false economy to go for this model. 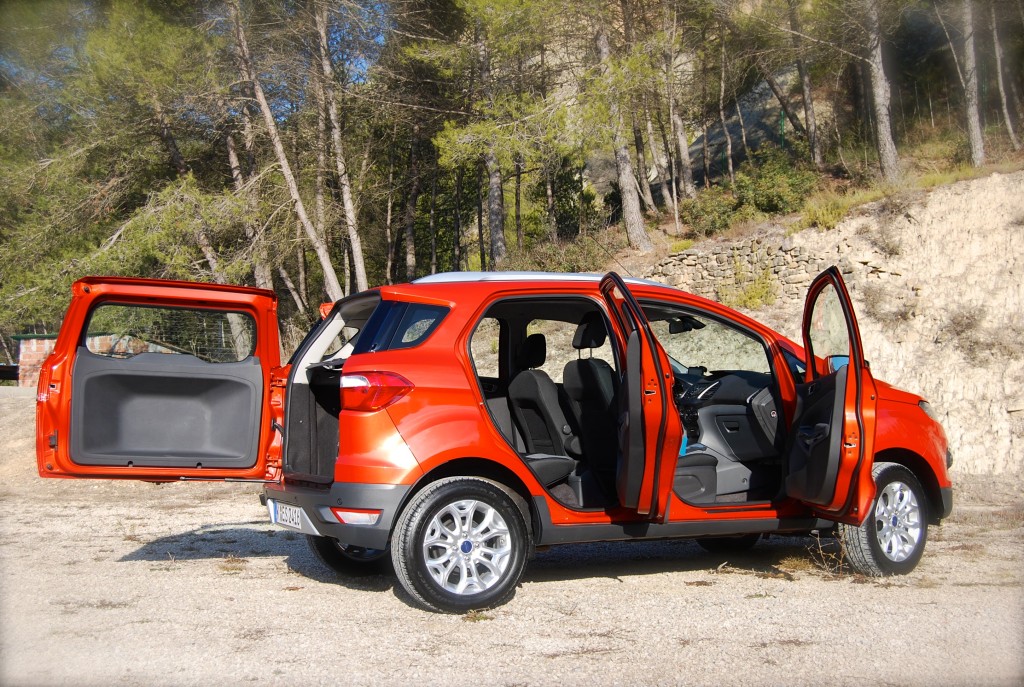 If you do decide your EcoSport will come equipped with an EcoBoost(this IS pronounced ‘ee-co’, by the way), you won’t be disappointed with the driving experience as a whole. It has just enough grunt to keep the performance interesting, although the extra height and weight over the Fiesta does hinder progress somewhat and you’ll find downshifts from 3rd to 2nd become more regular. When things go from straight to twisty, the Ford heritage shines through spectacularly as, even with its considerably raised ride-height, it finds assured grip with only the slightest hint of roll.

It’s hard to predict what the European market will make of the EcoSport which has proved so popular elsewhere. My initial feeling is that Ford have rushed somewhat, fearful of missing this fruitful bandwagon. It’s certainly not the cheapest (£1500 more than alternative Nissan Juke), it’s not particularly economical or sporty, and with only 4 Euro NCAP stars and a slightly bargain-basement interior, I fear it could dilute the excellent reputation Ford have worked so hard to gain over the last decade.

For full details of the EcoSport and all other Ford models, go to www.ford.co.uk

I'm Ben Harrington and I'm a car lover, freelance motoring journalist and family-man (I'll let you decide the order!) I started Driving Torque in 2010 to share my love of all things motoring with the wider world. Since then, … END_OF_DOCUMENT_TOKEN_TO_BE_REPLACED